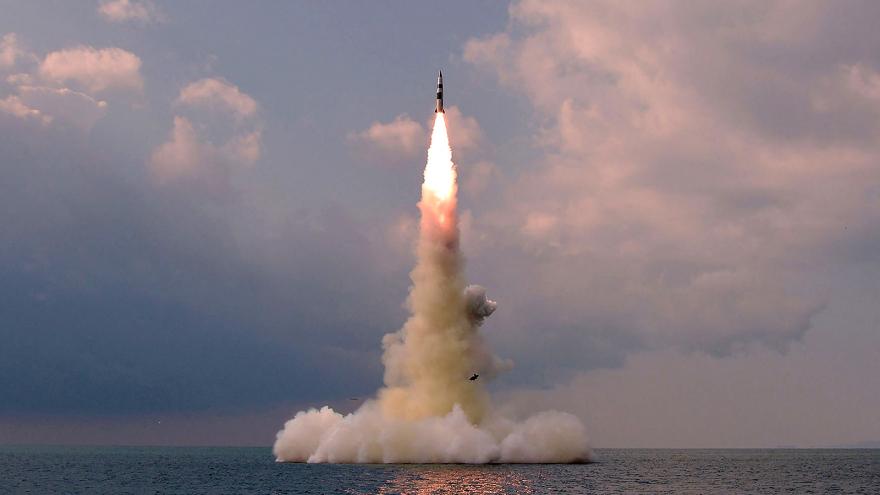 The report said "lots of advanced control guidance technologies" had been included in the missile, which would "greatly contribute to putting the defence technology of the country on a high level and to enhancing the underwater operational capability of our navy."

Japan and South Korea reported the launch of at least one ballistic missile on Tuesday, which they said was fired from the sea near the port city of Sinpo, Hamgyong province, at about 10 a.m. local time Tuesday (9 p.m. ET Monday). Sinpo is home to a North Korean shipyard.

The UN Security Council will hold a closed-door meeting Wednesday to discuss North Korea in the wake of the latest missile test, a UN diplomat with knowledge of the meeting told CNN. Pyongyang is barred from testing ballistic missiles and nuclear weapons under international law.

Adam Mount, a senior fellow at the Federation of American Scientists in Washington, said North Korea had previously tested only a small number of SLBMs, despite claiming for a number of years to have the capacity.

Mount said North Korea viewed SLBMs as another method to get past the missile defenses of the United States and its allies, specifically South Korea and Japan. "They're concerned our missile defenses nullify their deterrent capabilities," he said.

But Mount added SLBMs are only as good as the vessels that carry them, and the US military was more than a match for North Korea's noisy submarines.

"The weak link in their submarine missile program is the submarines, and that is an enormous technical challenge for the North Koreans," he said, adding Pyongyang's vessels were so outmatched, the SLBMs were effectively a "redundant capability."

North Korea's Tuesday missile test came after weeks of seesawing tensions on the Korean Peninsula, which saw growing cooperation between Pyongyang and Seoul at the same time as rising military brinksmanship.

On October 4, Pyongyang agreed to reopen official communications with Seoul for the first time in months. South and North Korea spoke on a joint-communication line on Tuesday shortly before the missile test, a South Korean Unification Ministry official said, but the North did not discuss the launch during the call.

North Korea has also sped up its weapons testing program in recent weeks, including the launch in late September of what it claimed was a new hypersonic missile.

In a statement Tuesday, the US Indo-Pacific Command said it was aware of North Korea's latest missile launch and would work closely with regional allies to monitor the situation.

"The United States condemns these actions and calls on the DPRK to refrain from any further destabilizing acts," the statement said, referring to North Korea by its official name. "The US commitment to the defense of (South Korea) and Japan, remains ironclad."