North Korea presented US with $2 million bill for care of Otto Warmbier, but Trump says US didn't pay 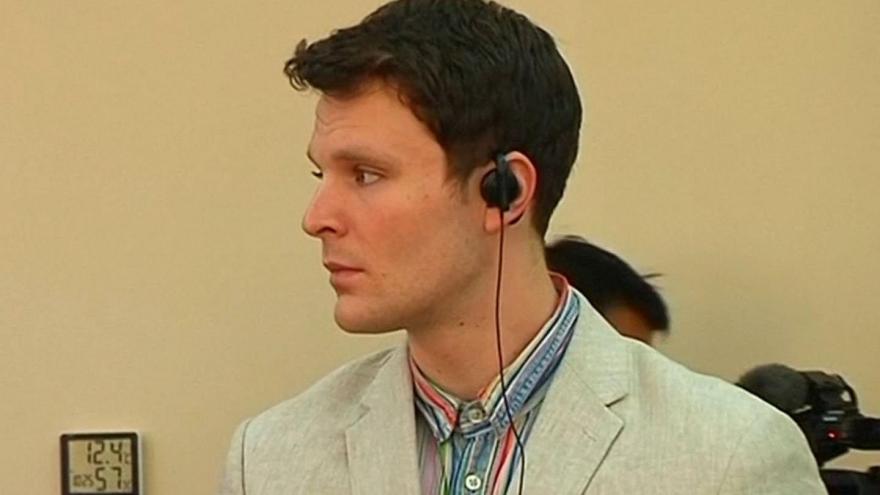 **This image is for use with this specific article only** The North Korean government presented the United States with a bill for $2 million for the hospital care of Otto Warmbier, the American college student who was held as a prisoner by Pyongyang, and insisted the US sign a pledge to pay the bill before releasing him from their custody in 2017, according to a source familiar with the matter.

(CNN) -- The North Korean government presented the United States with a bill for $2 million for the hospital care of Otto Warmbier, the American college student who was held as a prisoner by Pyongyang, and insisted the US sign a pledge to pay the bill before releasing him from their custody in 2017, according to two sources familiar with the matter.

A third source familiar with the matter, as well as President Donald Trump, said the US didn't pay.

The bill was handed to Joseph Yun, the former State Department Special Representative for North Korea who traveled to Pyongyang in June 2017 to bring Warmbier home, the sources told CNN.

Warmbier was in a comatose state at the time of his release from North Korean custody and died a few days after returning to the United States.

Yun, who had orders from Trump to bring Warmbier home, signed the bill after informing then-Secretary of State Rex Tillerson about it. Tillerson then told Trump about the bill, according to the source.

The Trump administration has not paid this bill, the third source told CNN Thursday, adding that North Korea did not raise the issue as it sought to begin easing the tensions with the US in 2018 nor when Secretary of State Mike Pompeo negotiated the release of three Americans that same year, the source said.

"We made clear that they were never going to get anything" when the negotiating occurred for the release of the 3 Americans, the source added.

Trump flatly stated on Twitter Friday that the US paid "no money" to North Korea for Warmbier.

Earlier this month, at an event attended by Otto Warmbier's family, Pompeo dismissed the idea of the US paying ransom for hostages.

"Please remember that any money to a terrorist or terrorist regime gives money so that they can seize more of our people," he said. "We cannot accept that risk. You wouldn't ask that of us."

While the North Koreans did not bring up the bill during Trump's summits with Kim Jong Un in Singapore and Vietnam, the source noted that the expectation for this payment could be brought up again.

That's especially true because the ministry of foreign affairs in North Korea is gaining influence at the negotiating table, and they are the ones who handed Yun that bill, the source said.

Reached by CNN on Thursday, Yun said he could not confirm the report because of the sensitive nature of the discussions.

"I cannot confirm that," Yun said. "These are diplomatic exchanges and negotiations that I do not confirm."

"We do not comment on hostage negotiations, which is why they have been so successful during this administration," White House press secretary Sarah Sanders said in a written response to CNN.

The State Department declined to comment and referred to Sanders' response.

The Washington Post was first to report that North Korea presented Yun with the invoice.

Warmbier was detained by North Korean officials in January 2016 while attempting to return to the US from a tour of the country. He was returned to his family "with severe brain damage and in a nonresponsive state" on June 13, 2017, and died six days later.

Fred Warmbier, Otto's father, told The Washington Post he had no previous knowledge of the bill, but characterized it as "ransom" for his deceased son.

In February, Trump sided with Kim after he denied knowledge of their son's maltreatment during his imprisonment during their second summit in Vietnam.

"He tells me that he didn't know about it and I will take him at his word," Trump said during a news conference, also claiming Kim "felt very badly. But he knew the case very well, but he knew it later."

Those comments prompted a harsh rebuke from the Warmbier family.

Trump later addressed the issue on Twitter arguing that he was being "misinterpreted" after successfully getting Warmbier out of North Korea and professing to hold the country accountable for Warmbier's death -- though he did not mention Kim's role.

"I never like being misinterpreted, but especially when it comes to Otto Warmbier and his great family," the President said at the time. "Remember, I got Otto out along with three others. The previous Administration did nothing, and he was taken on their watch."