North Korea: If US wants to talk, put someone 'more mature' than Pompeo in charge 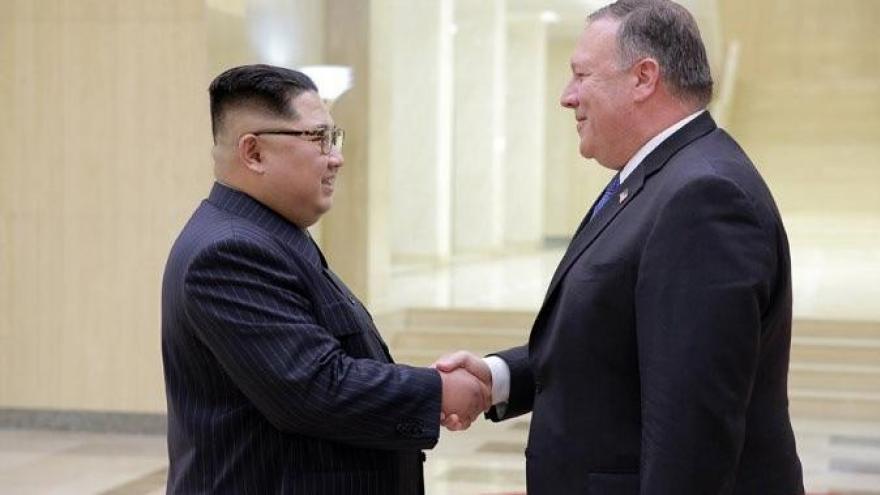 North Korean leader Kim Jong Un and US Secretary of State Mike Pompeo are photographed during a meeting in Pyongyang.

(CNN) -- North Korea's Foreign Ministry has issued a stinging rebuke of United States Secretary of State Mike Pompeo, hours after the country claimed to have tested a new tactical weapon.

In a statement released by the state-run Korean Central News Agency, Foreign Ministry official Kwon Jong Gun said Pompeo had been "letting loose reckless remarks and sophism of all kinds against us every day."

Kwon said North Korean leader Kim Jong Un had made his "principled stand" on negotiations between Pyongyang and Washington clear in a recent speech to the country's rubberstamp parliament.

"Everyone has a clear interpretation of his speech which says that the US should change its way of calculation and come up with responsive measures before the end of this year," Kwon said.

North Korea has been pushing for more sanctions relief before it continues denuclearization, while the US has demanded greater evidence that the country is prepared to reduce its nuclear arsenal. The disagreement is believed to be the primary reason the most recent round of talks between Kim and US President Donald Trump fell apart in Hanoi, Vietnam.

Pompeo was one of the primary drivers in Washington of those talks, and the historic first summit between Trump and Kim in Singapore. That meeting came about after Pompeo traveled to Pyongyang, where he was photographed smiling and shaking hands with Kim.

The shine appears to have come off the relationship now, however. Kwon complained that Pompeo had characterized Kim's speech as being about finishing "working level negotiation between (North Korea) and the US by the end of the year," an interpretation he said was "talking nonsense."

"We cannot be aware of Pompeo's ulterior motive behind his self-indulgence in reckless remarks; whether he is indeed unable to understand words properly or just pretending on purpose. However, it is a very dangerous situation if he really did not grasp the meaning," Kwon said.

"The meaning is that the US should get rid of the root cause that pushed us into a nuclear state and obstacles on the way to denuclearization by its own hands; otherwise no one can predict how the situation on the Korean peninsula will turn out."

He also appeared to blame Pompeo for the collapse of the Hanoi talks, saying that summit "gives us a lesson that whenever Pompeo pokes his nose in, the talks go wrong without any results."

Kwon's statement concluded, "Therefore, even in the case of possible resumption of the dialogue with the US, I wish our dialogue counterpart would be not Pompeo but other person who is more careful and mature in communicating with us."

A US State Department spokesperson said Thursday they were "aware of the report" of Kwon's remarks.

"The United States remains ready to engage North Korea in a constructive negotiation," the spokesperson said.

Pyongyang has been growing frustrated with both Pompeo and Trump's national security adviser John Bolton, particularly over recent testimony Pompeo gave to Congress on the lack of progress towards denculearization, said CNN International correspondent Will Ripley, who has visited North Korea and interviewed top officials numerous times.

"From North Korea's perspective, the remarks that Pompeo gave (in Congress) were disrespectful to Kim Jong Un himself and so they want him to no longer be their negotiating partner," he said.

"This puts President Trump in a very difficult position, because Pompeo has been his lead negotiator. If he acquiesces to North Korean demands and puts someone else front and center, that could be perceived as weakness by the North Koreans. On the other hand, if he insists Pompeo remains the negotiator, there is no guarantee that the North Koreans will agree to sit down and talk with him."

"The development and completion of this weapons system will be a great historic event in strengthening the combat capability of the People's Army," Kim said, according to KCNA.

The state media report was scant on details about the weapon. A tactical weapon is designed to be used on the battlefield, and is typically not a long-range armament.

Pyongyang last conducted a "tactical" weapons test in November 2018. A South Korean government source with military knowledge told CNN that weapon was likely a piece of artillery "likely to be a multiple rocket launcher." At the time, South Korean Unification Ministry deputy spokeswoman Lee Eu-gene downplayed the significance of the 2018 event, saying Kim had been continuing his inspections in the military sector "intermittently."

Harry Kazianis, a Korea expert at the Center for the National Interest, a Washington think tank, said the latest test serves as a reminder that Kim "never promised to stop testing all weapons in his military arsenal, just nuclear weapons and ICBMs that have the potential to hit the US homeland."

"Kim is trying to make a statement to the Trump Administration that his military potential is growing by the day, and that his regime is becoming frustrated with Washington's lack of flexibility in recent negotiations," Kazianis said.

"Sadly, we are only one ICBM test away from another crisis with Pyongyang, and these smaller tests only bring us closer to such a moment."