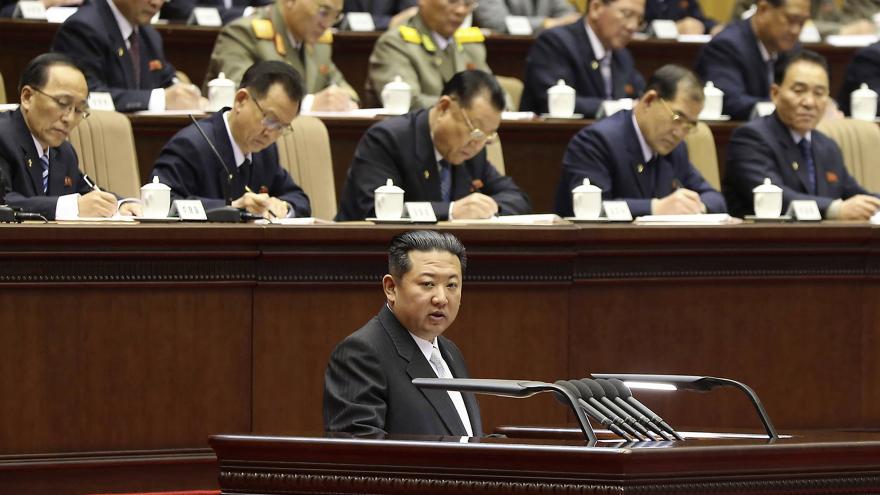 (CNN) -- North Korea has fired what is believed to be its first intercontinental ballistic missile (ICBM) in more than four years as Western leaders gather in Brussels for a security summit.

The suspected ICBM flew to an altitude of 6,000 kilometers (3,728 miles) and to a distance of 1,080 kilometers (671 miles) with a flight time of 71 minutes before splashing down in waters off Japan's western coast on Thursday, according to Japan's Defense Ministry.

Thursday's launch is North Korea's 11th of the year, including one on March 16 which is presumed to have failed, and its longest-range test since November 2017, when it sent a Hwasong-15 missile to an altitude of 4,475 kilometers (2,800 miles) with a range of 950 kilometers (590 miles) and flight time of 53 minutes.

The United States joined allies South Korea and Japan in strongly condemning the launch. In a statement, the White House said the move "needlessly raises tensions and risks destabilizing the security situation in the region."

US President Joe Biden is currently in Belgium, where he is attending a G7 summit alongside Japanese Prime Minister Fumio Kishida. The gathering is part of a series of meetings, including an extraordinary NATO summit, as Western leaders seek to align their responses to Russia's brutal invasion of Ukraine. A European Council meeting will also take place Thursday.

According to analysts, the recent spate of North Korean missile tests suggest the country's leader, Kim Jong Un, is attempting show an increasingly turbulent world that Pyongyang remains a player in the struggle for power and influence.

"North Korea refuses to be ignored and may be trying to take advantage of global preoccupation with the war in Ukraine to force a fait accompli on its status as a nuclear weapons state," Leif-Eric Easley, associate professor of international studies at Ewha Womans University in Seoul, told CNN.

"North Korea is nowhere near initiating aggression on the scale of Russia's invasion of Ukraine. But Pyongyang's ambitions likewise exceed self-defense as it wants to overturn the postwar security order in Asia, added Easley.

In response to Thursday's suspected ICBM test, South Korea's military launched several warning missiles for the first time since 2017, the Joint Chiefs of Staff (JCS) said in a text sent to reporters.

"Our military is monitoring North Korean military's movements and have confirmed that we have the capability and posture to accurately strike the origin location of the missile launch and command and support facilities any time North Korea launches a missile," the JCS said.

Analysts said Thursday's test could be the longest-range missile yet fired by North Korea.

"North Korea appears to have conducted a 'lofted' missile test. This is a tactic often employed by them to test longer range systems without more provocatively overflying another country," said Joseph Dempsey, research associate for defense and military analysis at the International Institute for Strategic Studies in London.

He said the preliminary data of Thursday's test indicate it could be a Hwasong-17, a much larger ICBM than the Hwasong-15 tested in 2017.

Kim Dong-yub, a professor at the University of North Korean Studies in Seoul, said data indicates Thursday's missile could have a maximum range of about 15,000 kilometers (9,320 miles) -- theoretically putting it within reach of the continental United States, depending on the weight of the warhead it would carry -- and about 3,000 kilometers (1,864 miles) further than the Hwasong-15.

Despite the potentially extended range, Kim said Pyongyang has still yet to demonstrate its ability to master the technology required to enable a warhead to successfully re-enter the Earth's atmosphere into the final stages of flight.

Pyongyang's other most recent launches, on February 26 and March 4, were likely intended to test a new ICBM system, the US Defense Department said earlier this month.

The US Indo-Pacific Command announced earlier this month that the US is intensifying "intelligence, readiness and surveillance collection activities" related to North Korea following the recent spate of missile launches.

The move is a signal from the Biden administration that it needs to strengthen its military posture to ensure the US and allies in the region like South Korea and Japan are protected against North Korea's missile tests.

The command said they have "ordered intensified Intelligence, Surveillance, and Reconnaissance collection activities in the Yellow Sea, as well as enhanced readiness among our ballistic missile defense forces in the region."

Earlier this month, the US military staged exercises on and around the Korean Peninsula to show its readiness in the wake of North Korean activity, including simulating ballistic missile defense systems.

The US Army's 35th Air Defense Artillery Brigade moved to a remote location, "occupying its wartime defensive position, emplacing the Patriot missile system, and executing air and missile defense operations under a simulated combat scenario," US Forces Korea said in a press release.

And at sea, F-35 and F/A-18 fighter jets flying off the aircraft carrier USS Abraham Lincoln along with US Air Force assets based in the region put on a show of force in the Yellow Sea off the western coast of South Korea, according to a statement from the US Navy's 7th Fleet in Japan.

This story has been updated to clarify the location of missile.