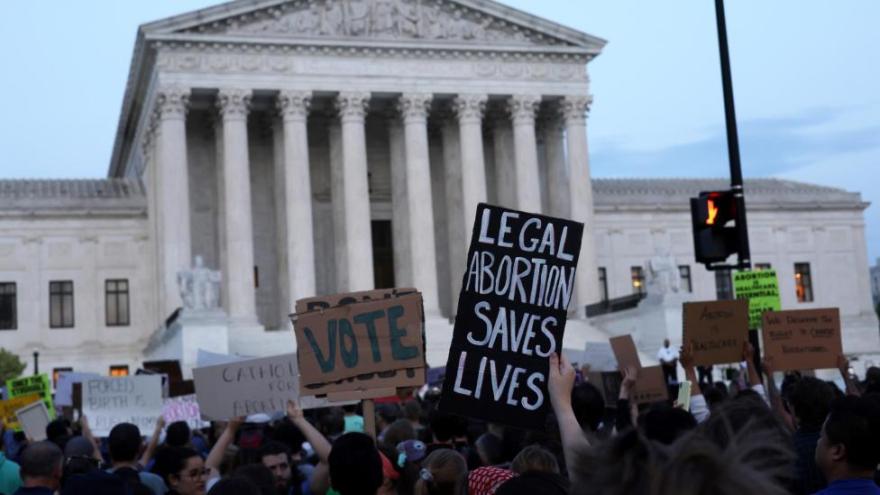 Pro-choice activists protest during a rally in front of the U.S. Supreme Court in response to the leaked Supreme Court draft decision to overturn Roe v. Wade May 3 in Washington, DC. A state judge in North Dakota on August 25 blocked the state's so-called trigger abortion ban, which was set to go into effect on August 26.

(CNN) -- A state judge in North Dakota on Thursday blocked the state's so-called trigger abortion ban, which was set to go into effect on Friday.

Judge Bruce Romanick of the South Central Judicial District in Burleigh County said he was issuing the preliminary injunction to maintain the status quo in the state while the challenge to the law unfolded in court.

His order said he was persuaded by the arguments put forward by the abortion clinic challenging the ban that there would be "significant" harm if the law took effect. His order said that he was not making any conclusions about which side was more likely to succeed on the merits of the case over whether the law violates the state's constitution.

North Dakota currently allows abortion up until 20 weeks or more post-fertilization. The abortion ban that was set to take effect Friday would make it a felony to perform an abortion in the state with exceptions for the life of the mother or in cases of rape or incest.

Red River Women's Clinic, the abortion provider that had brought the lawsuit, had set up a facility across the border in Minnesota in anticipation of being forced to shut down in North Dakota once the law took effect.

Romanick acknowledged the clinic's move to relocate in his order Thursday, and said that the abortion ban "would implicate others, including physicians at regional hospitals if it were to go into effect."

Meetra Mehdizadeh -- a staff attorney at the Center for Reproductive Rights, which is representing the abortion providers in the case -- said in a statement that the court had "rightfully recognized the harmful impacts this ban would have on North Dakotans."

"This trigger law completely disregards the health care needs of pregnant people and punishes doctors for providing critical, life-saving services to their patients," she said. "State lawmakers have been so hellbent on cutting off abortion access that they are trampling the North Dakota Constitution."

The office of Attorney General Drew Wrigley, who is defending the ban, did not immediately respond to CNN's inquiry.

Romanick had previously delayed implementation of the state's trigger ban, finding that the state had botched the procedure for putting it into effect.