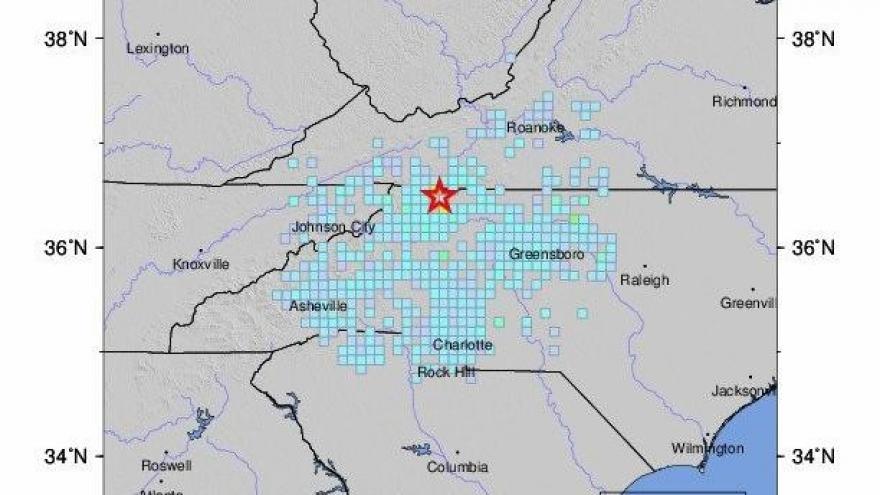 A 5.1-magnitude earthquake hit about 2 miles from the town of Sparta, North Carolina, along the state's border with Virginia, according to the preliminary report from the US Geological Survey.

(CNN) -- A 5.1-magnitude earthquake hit about 2 miles from the town of Sparta, North Carolina, early Sunday, along the state's border with Virginia, according to the preliminary report from the US Geological Survey.

It's the strongest quake to shake the state since 1926, according to the North Carolina Geological Survey.

The quake, whose epicenter is in Alleghany County, was felt as far away as Washington D.C. and Atlanta, according to reports to the USGS.

Alleghany County Sheriff Bryan Maines was getting ready for church when "stuff started falling off of the wall," he said. The house appeared to shift, and it felt like it might fall down, he told CNN.

"Started getting some sheet rock damage. My chimney was starting to crack," he said. "Several houses with structure damage. We have folks out right now. There are houses that have shifted 1 or 2 inches off their foundation. There are folks who have had to leave their homes because it's not safe inside. It's a pretty big event."

There were no immediate reports of injuries, but there is damage in the town of about 1,800 people, Sparta Mayor Wes Brinegar said, adding that the foundation of his home cracked and items fell from shelves inside his home.

"It felt like a big locomotive going by and a big wave coming underneath the bed," the mayor said. "I've lived here my whole life and have never felt anything like that."

The USGS says earthquakes become destructive at a magnitude of 4.0 to 5.0, depending on variables. A 5.3-magnitude is considered a moderate quake, the USGS says.

The agency issued a green alert, meaning there is a low likelihood of casualties and damage.

Town Councilman Cole Edwards, too, was jolted awake by the quake, he said. There was no damage to his home, but it broke some dishes and knocked some pictures off of the wall, he said.

"We've had a lot of scared folks this morning," the mayor said. "That was the most intense one we've ever had."

The earthquake rumbled at a depth of about 5.7 miles, which is considered a shallow quake. Quakes shallower than 43 miles tend to be more destructive than deeper ones, the USGS says.

This marks North Carolina's strongest earthquake since a 5.2-magnitude struck Mitchell County, about 50 miles northeast of Asheville, on July 8, 1926, the North Carolina Geological Survey says. A 5.5-magnitude shook Skyland in 1916, the agency said.

Sparta is about 100 miles north of Charlotte. A Charlotte firefighters union tweeted there were no reports of injuries.

"Good Morning Charlotte, we are sure most of you are awake because yes, that was an earthquake you felt. No local reports of damage or injuries but what a wake up call," the union tweeted.

Sheriff Maines' deputies are making sure they're "highly visible right now," he said.

"With the pandemic going on, people have higher anxiety right now. One of the biggest things for law enforcement right now is to calm the waters, for people to live in peace and not be in fear right now," he said. "We live in a small mountain community. We all plan on taking care of each other."

A USGS impact map shows the agency received reports from people who felt the quake all along the eastern seaboard. The map shows clusters of reports more than 300 miles away, in Atlanta and in the nation's capital.

"I felt my bed shaking ever so slightly, and I knew it was the unmistakable feel of an earthquake, but it was so subtle, I didn't know if others might notice and I figured the origin had to be far away," Limaya Atembina of Rockville, Maryland, told CNN in a Facebook message.