North Carolina man overdosed in police custody; he was alone and crying out for help before collapsing 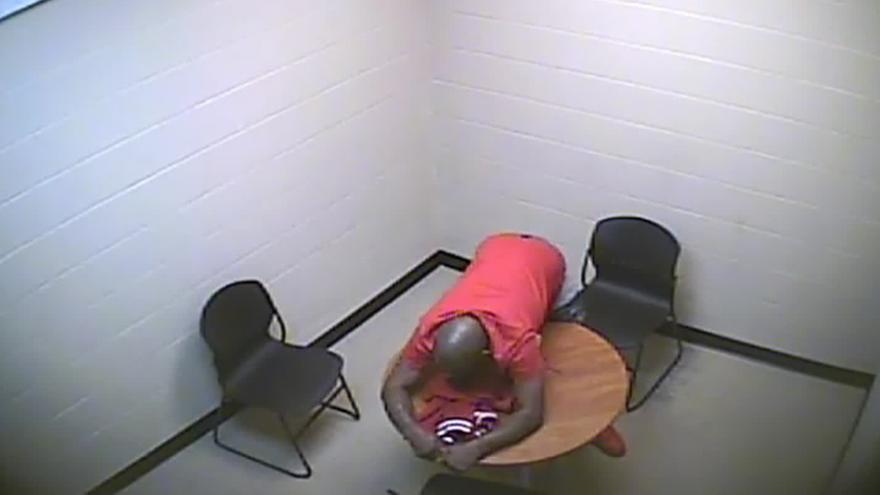 (CNN) -- Harold Easter was seizing on the floor of a police interrogation room for about seven minutes before officers found him, a video released by police shows. Three days later, he was dead.

Easter, 41, ingested a large amount of cocaine as he was being pulled over by police for drug and traffic charges in Charlotte, North Carolina, on January 23, police say, but he was not given medical assistance right away.

On Thursday, the Charlotte-Mecklenburg Police Department released 17 video clips, including body camera and surveillance footage from the police precinct that provide new details about Easter's arrest as well as the moments before and after he collapsed at the police station.

"You think I want to die?" Easter is heard on the video as he grips the edge of a table, shaking.

The surveillance videos show Easter was inside an interview room for about 45 minutes after his arrest. During that time, Easter was left alone several times. At some point, a person briefly walks inside the room and gives him a cup of water, minutes after Easter had yelled that he needed water.

But no one entered the room to check on him about 20 minutes later as he began having a seizure while leaning on a table or after he collapses on the floor, the video shows.

Alex Heroy, an attorney representing Easter's family, told CNN that it was very difficult for his mother and family to watch the videos released by police.

"She cried out the whole time for her son," Heroy said.

Easter was a dedicated father to four children who's deeply missed, Heroy said.

"He's unbelievable ... He took his kids to daycare and preschool and school every day, oftentimes staying the day with them and helping out at the school," Heroy said. "Family meant everything."

CNN has reached out to the officers and the police union for comment.

The directive was revised in February to require officers to "maintain continuous observation" of detainees, the CMPD said in a statement last month.

Jennings added that he believes the officers knew Easter had ingested cocaine and should have called for a medic immediately, he said.

"I don't believe these officers had malicious intent. But they did make a bad decision, and they didn't follow policy," Jennings said on Thursday. "So those bad decisions have consequences. Especially when those decisions have contributed to the loss of a life, a life that we had the responsibility to protect."

Five police officers involved in the incident recently resigned after an internal investigation into the incident was completed, Jennings said.

The officers have since resigned, Jennings said during a press conference Thursday.

Authorities "cannot prove that Mr. Easter, after having voluntarily eaten a large amount of crack cocaine, would have lived had he received immediate medical attention," Merriweather wrote in a September letter to the North Carolina State Bureau of Investigation.

"In fact, none of the medical experts consulted about the evidence in this matter would be able to testify to a degree of medical certainty that Mr. Easter would have lived after having ingested that amount of cocaine, even if officers had called for medical attention at the time of the initial traffic stop," the release said.

The officers had worked for CMPD between two and 12 years, the release noted.

CNN has reached out to the officers and the police union for comment.

What led to his arrest?

Easter was pulled over on January 23, police say, after officers saw what appeared to be a drug deal. Police say he was in possession of cocaine and marijuana. He was detained on drug and traffic charges, the police department said in a statement.

Body camera footage shows an officer stopping his car behind an SUV and exiting with his gun drawn.

"Don't eat it! He's eating it," the officer says while reaching inside the SUV's window and pulling the driver's red hoodie. "Hands up."

As Easter exits the SUV, he's handcuffed and taken away by another office while the first officer searches the car. The officer finds plastic bags inside the vehicle and tells another officer there were drugs in the bags, the video shows.

Later in the video, Easter is heard repeatedly telling an officer -- who's now driving the police car -- that he needs to pee. When they are walking into the police station, Easter says "Cuz I swallowed something you ain't gonna let me get no water."

A toxicology report for Easter showed cocaine, opioids, levamisole and lidocaine in his body at the time of death.