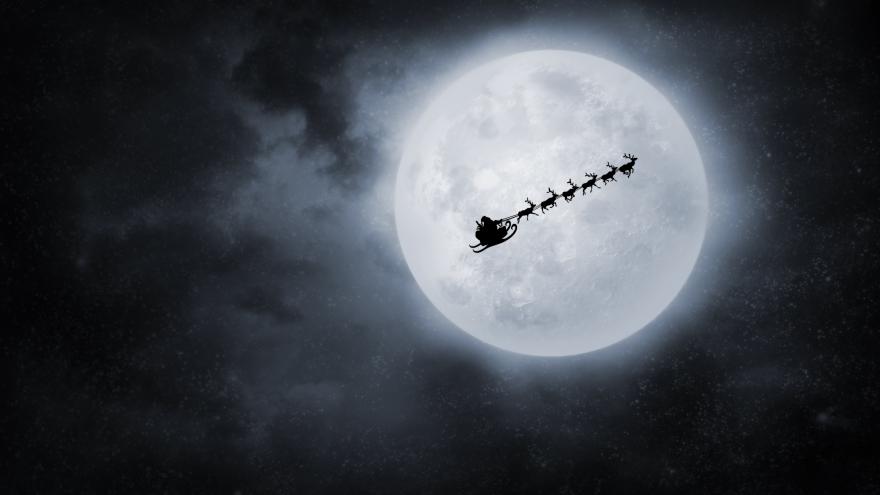 (CNN) -- He sees you when you're sleeping, and knows when you're awake -- but these days, we can keep tabs on him too.

Santa Claus has begun his Christmas Eve journey delivering presents around the world and will be shimmying down chimneys near you soon, according to the US military command charged with protecting North American airspace.

His first stops were in eastern Russia and Asia, just in time for Christmas Day there.

"His magical journey around the world has begun," said the organization, which has been following Santa for more than 60 years.

The group uses infrared sensors to follow the glow of Rudolph's nose, enabling them to pinpoint the location of his sleigh.

"We are proud to carry on the tradition of tracking Santa as he travels along his yuletide flight path," added NORAD commander Terrence O'Shaughnessy, in a press release which made sure to stress that tracking Santa is a "supplementary mission," and that protecting North American airspace remains NORAD's "top priority."

Santa Claus did not immediately respond to CNN's request for comment.

The agency's annual mission began with a typo more than half a century ago. On Christmas Eve in 1955, a local Sears store in Colorado Springs ran a dial Santa ad. Except the number was a misprint; instead of listing the number for Sears' Santa hotline, it posted the number for the Continental Air Defense Command center.

It led to Colonel Harry Shoup receiving calls all night from kids asking to speak with Santa Claus.

Instead of telling them that they dialed the wrong number, Shoup said that he wasn't Santa Claus but he could track him on radar. Shoup and his team spent the rest of the night fielding calls, giving out details about Santa's location as he and his reindeer flew through the sky to deliver gifts to children.

Today, the tradition is made possible by a team of volunteers.