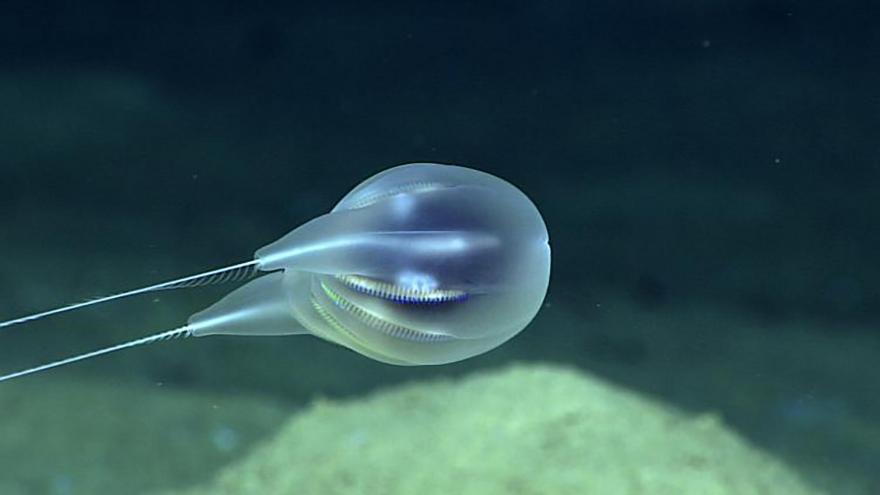 This type of comb jelly, or ctenophore, was first seen during a 2015 underwater expedition by a NOAA research team.

(CNN) -- Scientists have discovered a new species of ctenophore, or comb jelly, near Puerto Rico.

The newly named Duobrachium sparksae was discovered two and a half miles below sea level by the National Oceanic and Atmospheric Administration Fisheries research team. It was found during an underwater expedition using a remotely operated vehicle in 2015 and filmed by a high-definition camera.

NOAA Fisheries scientists Mike Ford and Allen Collins spotted the ctenophore and recognized it as a new species. This is the first time NOAA scientists have identified a new species using only high-definition video, according to NOAA.

"The cameras on the Deep Discoverer robot are able to get high-resolution images and measure structures less than a millimeter. We don't have the same microscopes as we would in a lab, but the video can give us enough information to understand the morphology in detail, such as the location of their reproductive parts and other aspects," Collins said.

The scientists also said there was another unique quality to the discovery. During the expedition, they were not able to gather any samples, so the video evidence is all they have.

"Naming of organisms is guided by international code, but some changes have allowed descriptions of new species based on video — certainly when species are rare and when collection is impossible," Ford said. "When we made these observations, we were 4,000 meters down, using a remote vehicle, and we did not have the capabilities to take a sample."

There are between 100 and 150 species of comb jellies, and despite their name, they are not related to jellyfish at all, according to the NOAA. The species is carnivorous, and many are highly efficient predators that eat small arthropods and many kinds of larvae.

The researchers said that there did not initially get a long look at the animal, so there is still a lot about this new species that they do not know yet. Their findings were recently published in the journal Plankton and Benthos Research.

"We're not sure of their role in the ecosystem yet," Ford said.

The videos are now part of the Smithsonian National Museum of Natural History Collection and publicly accessible.