No survivors found after China's worst air disaster in more than a decade, investigators say 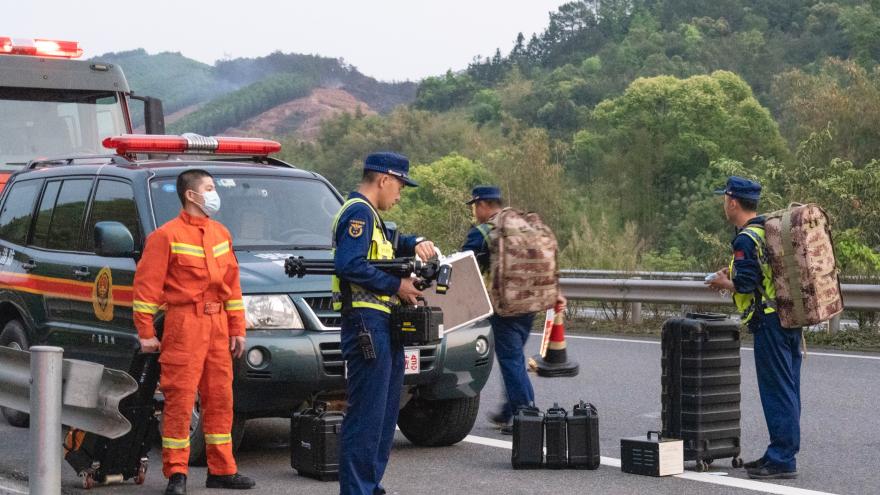 (CNN) -- No survivors of a China Eastern Airlines plane crash have been found after a second day of search efforts, Chinese investigators said late Tuesday.

In China's worst air disaster in more than a decade, the Boeing 737-800 -- carrying 132 people -- crashed Monday afternoon in a remote, mountainous region in the south of the country as it flew from Kunming to Guangzhou.

Communications with the crew could not be established in the final moments before the airliner crashed, Chinese air crash investigators said at a Tuesday news conference.

"The flight took off from Kunming at 1:16 p.m. and was flying normally. At around 2:21 p.m., it arrived over Wuzhou city of Guangxi province. The ground station noticed that the plane had a sudden altitude change, and then it lost communication with the plane, before the plane eventually crashed," said Sun Shiying, a representative for China Eastern Airlines.

The aircraft had passed pre-flight checks and the nine crew members were qualified and healthy, added Sun.

The cause of the crash is not yet clear, an official from the Civil Aviation Administration of China (CAAC) said. "The investigation team will spare no effort to collect evidence from all parties and focus on search," said the CAAC official.

The black boxes are flight data and cockpit voice recorders which could hold crucial clues to how the disaster unfolded.

The probe into the cause of the crash will be "very difficult," warned investigators, due to how severely damaged the plane is.

Photos and videos posted by state media show giant plumes of smoke rising above the mountains following the crash. Search and rescue crews wade through the thicket, scattered with debris and plane parts. Wallets, ID cards and fragments of a phone were among personal belongings strewn on the ground, China Youth Daily reported.

In the minutes before the disaster, the plane had been at a cruising altitude of 29,000 feet (about 8,900 meters), according to flight tracking data from FlightRadar24. Then, the jet nosedived so quickly that it plunged more than 25,000 feet (7,600 meters) in under two minutes.

Security footage from a mining company near the crash site shows what appears to be a plane hurtling toward the forest, nearly vertical in its rapid fall. CNN cannot independently confirm the authenticity of the video, or that the aircraft is China Eastern Flight 5735 -- but the steep decline matches the flight tracking data.

Witnesses reported seeing a fiery explosion, airplane parts and clothing tangled in the trees, and swathes of the woods aflame.

One item retrieved from the crash site, a handwritten note describing the significance of traditional jade jewelry, was photographed and spread widely online. The jewelry signifies "a complete life, a smooth career, family happiness, inner peace ... which outlines people's expectations of life," the note read -- prompting messages of mourning on Chinese social media.

On Monday evening, relatives of the passengers gathered in the Guangzhou airport, waiting for any news of their loved ones as authorities launched an investigation into the crash.

Due to the apparent speed of the crash, there is little chance anyone on board survived or that there will be clear remains left to identify, said David Soucie, a former safety inspector at the US Federal Aviation Administration (FAA).

Chinese President Xi Jinping issued a rare statement within hours of the crash, ordering the country's emergency services to organize a search and rescue operation, and to identify the cause of the crash.

"The fact that the President made such a pronounced and quick response to this tells me that they're taking it very, very seriously," Soucie said.

After several plane crashes in the 1990s and 2000s, China made a series of sweeping safety improvements. Monday's disaster is the country's first deadly commercial air crash since the 2010 Henan Airlines disaster, which killed 44 of the 96 people on board.

Hundreds of rescuers were deployed to the China Eastern crash site on Monday, and continued their work through the night. Footage showed police and emergency workers making their way through mountain paths in the dark, wielding flashlights. Other teams, including medical staff and firefighters, are seen working under tents, preparing supplies and surveillance drones.

But they face numerous challenges. The crash site is flanked by mountains on three sides, with only one narrow path in and no electricity in the area, according to state media. Heavy rescue equipment was unable to reach the scene on Monday, with videos showing search teams scrambling uphill through the trees.

A cold front is also expected to arrive soon, which could see heavy rainfall in the coming days, according to the Guangxi Meteorological Bureau.

It's not yet clear what caused the plane to begin dropping -- and we won't know more until authorities can retrieve and analyze the plane's cockpit voice recorder, black box and other essential pieces of data, said Soucie, the former FAA inspector.

Aviation expert Peter Goelz, a former managing director of the US National Transportation Safety Board (NTSB), told CNN that it might not be possible to do so.

"The biggest thing they can do right now is try and recover the flight data recorder and the voice recorder but with that kind of impact, those recorders could be damaged," said Goelz.

The investigation will be led by the CAAC. Boeing, the engine manufacturer, CFM, and the FAA will also be involved in the probe.

Investigators taking part in Tuesday's press conference did not comment on whether representatives from the NTSB would take part in the investigation.

This arrangement is standard for aviation incidents involving a US-designed aircraft that occur overseas.

Piecing together all the information and evidence in an investigation into the crash of a modern jetliner could take months or longer. The final report for the 2010 Henan Airlines crash wasn't released until almost two years later.

Meanwhile, China Eastern Airlines is contacting all families of the victims, according to CCTV. Wuzhou authorities have sent dozens of buses and taxis to pick up family members.

"That's the most difficult part about being an accident investigator, is dealing with the families," Soucie said. "What the families want at this point is to obtain whatever remains they can from the victims of the accident. In this case, there won't be much for them to get."

Though Boeing's 737 has faced extraordinarily high-profile safety concerns over the past three years, the plane that crashed Monday was a different version of the aircraft than the embattled 737 Max, crashes of which shook Boeing to its core.

The China Eastern Airlines plane was a Boeing 737-800, the most popular version of Boeing's jets now in service and the workhorse of many airlines' fleets. The plane that crashed Monday had been in service since 2015.

The airline will ground all its Boeing 737-800 flights, CCTV reported. But other Chinese carriers will continue to operate the same aircraft type, according to state media.

The 737-800 is part of a class of Boeing jets known as 737-NG, standing for "Next Generation." These planes have had safety issues cited by US regulators, although none of those rose to the level of requiring the planes to be grounded.

Boeing has sold more than 7,000 737-NG airliners worldwide and, until Monday, the type had seen only a dozen fatal accidents in its 25-year history.

Boeing came under international scrutiny after its 737 Max, which succeeded the 737-800, suffered two fatal crashes in 2018 and 2019. Those crashes were shown to be caused by a flaw in the design of a new stabilization system, which the 737-800 does not have.