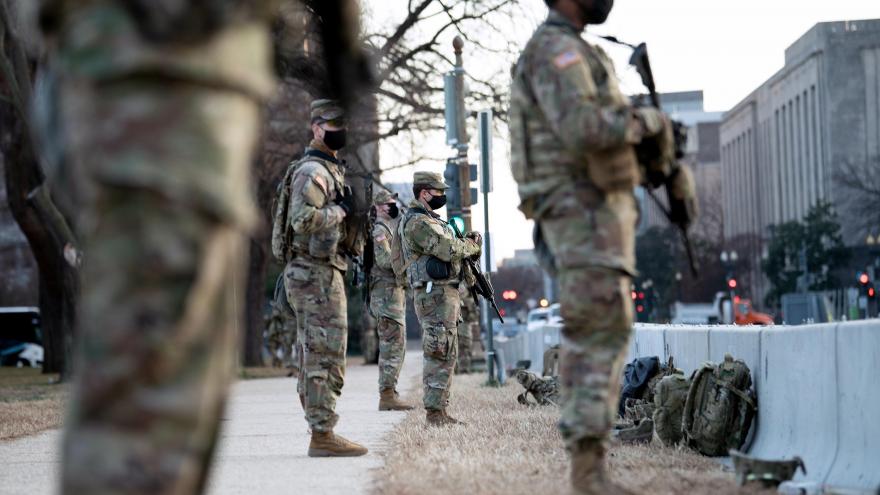 (CNN) -- The overwhelming majority of the more than 20,000 National Guard members expected in Washington for President-elect Joe Biden's inauguration will not be tested for coronavirus before they are deployed from states around the country or upon their arrival in the nation's capital, a National Guard spokesperson tells CNN.

The Pentagon has authorized up to 25,000 National Guard members to help with inauguration security.

Testing for National Guard members sent to DC is "case dependent" but not widely required, the spokesperson said, noting there are some screening procedures, such as temperature checks, in place.

"Incoming Guard men and women are screened upon departure from their individual states and upon arrival to the DC Armory according to CDC guidelines. Temperature checks and screening questions are in place; masks and social distancing are required where the mission allows," the DC National Guard said in a statement to CNN Friday.

The National Guard encourages coronavirus testing to personnel who are symptomatic or exposed to the coronavirus.

But as CNN has consistently reported, coronavirus can be spread by people who have no symptoms and without testing, it is impossible to know whether any of the thousands of Guard members are carrying the virus. And they are being deployed with little warning.

The troops are also arriving in large numbers as the US has had its deadliest 14 days in the pandemic. More than 3.2 million new cases have been reported in the first two weeks of 2021, according to John Hopkins University data.

"I'll just remind you -- that these National Guard folks that we're bringing on duty were doing something else just a couple days ago and had no idea they'd be coming here," Harris said during a news conference. "Bringing these folks together collectively -- it is a real concern for us."

The National Guard follows guidance issued by the Department of Defense in April that urged personnel "to follow CDC guidelines on the use of cloth face coverings in public settings or where other social distancing measures are difficult to maintain." Additional steps are being taken to ensure the safety of Guard members, including appropriate personal protective equipment and housing arrangements that allow for distancing, a National Guard Spokesman told CNN.

But it would be difficult to maintain Covid-19 social distancing precautions if there is an event similar to the riot on at the Capitol last week, a spokesman noted.

National Guard troops deployed at the state level by governors follow the health guidance of that particular state, including coronavirus testing protocol. As the District of Columbia is not a state, the gubernatorial role is assumed by the Secretary of the Army under the federal umbrella of the Department of Defense.