No charges will be filed in fatal police shooting of Amir Locke, killed during no-knock warrant service 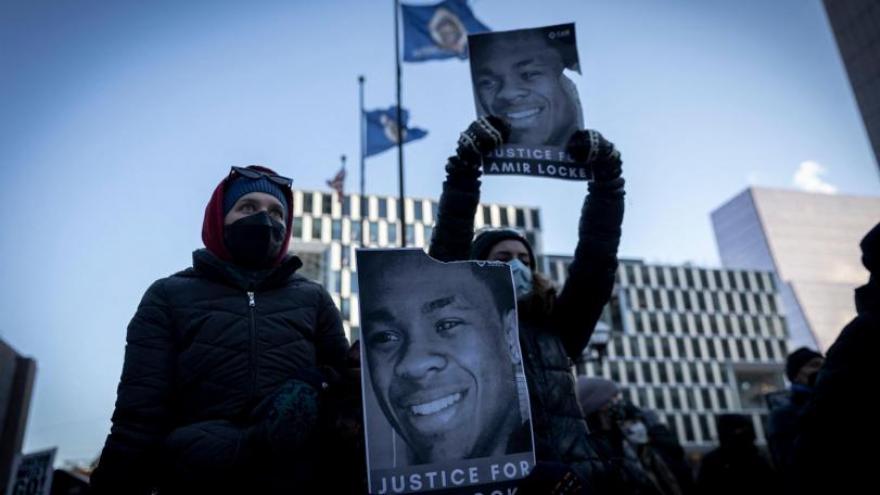 Demonstrators hold photos of Amir Locke during a rally in protest of his killing, outside the Hennepin County Government Center in Minneapolis on February 5.

(CNN) -- Prosecutors declined to file charges against the Minneapolis police officer who fatally shot Amir Locke or any other officers involved in the no-knock warrant service that led to the 22-year-old Black man's death in early February.

An officer shot Locke within a few seconds of entering the apartment after prosecutors said Locke emerged from a couch with a handgun and raised it toward an officer. The officer, and others on the Minneapolis SWAT team, were there serving a warrant in a homicide investigation.

"After a thorough review of all available evidence ... there is insufficient admissible evidence to file criminal charges in this case," according to a statement from the county attorney and state attorney general released Wednesday.

At the time Locke was shot, he was in legal possession of the firearm, inside the apartment, according to prosecutors, but they said that wasn't relevant to the investigation. According to the statement from prosecutors, Locke's actions after officers entered the apartment "on a judicially authorized search warrant" constituted a "specifically articulable threat."

"These circumstances are such that an objectively reasonable officer in Officer (Mark) Hanneman's position would have perceived an immediate threat of death or great bodily harm that was reasonably likely to occur, and an objectively reasonable officer would not delay in using deadly force," according to the statement from Attorney General Keith Ellison and Hennepin County Attorney Michael Freeman.

Jeff Storms, an attorney for Locke's family, said it was a "disappointing day for the family."

"They just have a very strong belief that the incredible wrong that happened to Amir is going to save other people's lives," Storms told CNN. "They're not going to let the lack of criminal charges slow them down one bit."

Locke's mother said he was working as a food delivery driver and had the gun for protection. She said her son was cremated because she didn't want her son's remains to stay in Minneapolis.

The Police Officers Federation of Minneapolis praised the prosecutors' decision, saying Hanneman was "faced with a deadly threat and he had to make a split-decision decision" to protect himself and others.

"MPD SWAT was executing a search warrant signed by a judge who authorized the use of a 'no knock' warrant," the federation said in a statement Wednesday.

It added: "The use of deadly force by an officer is never taken lightly and weighs heavy on the officers involved. This incident was a tragedy for everyone involved and will have a lasting impact on many lives."

The shooting drew national attention, in part, because of Minneapolis' place as the epicenter of the country's most recent police-reform movement, prompted by an officer in the same department killing George Floyd by kneeling on him during an arrest in 2020. Video of that encounter went viral and led to protests across America, sometimes violent and often involving property destruction, and reignited a debate over the role of police in American society.

City officials didn't release a lot of information in the days after an officer shot Locke, other than 14 seconds of video that they said showed Locke with the gun. Locke wasn't named in the warrant; Locke's cousin was.

What video they did release showed an officer quietly sliding a key into the apartment's door. After the door opens, a group of officers enter, yelling commands. After officers keyed into the apartment, Locke looked over the back of the couch, ducked down under a blanket, lowered a handgun, and then raised it toward the officer who then shot him three times, according to the statement from prosecutors announcing their decision.

During a news conference Wednesday, Ellison and Freeman said they met with Locke's family in the morning to inform them of their decision.

"We expressed our personal sympathies and empathies with the family," said Freeman. "They, like us, are very frustrated with no-knock warrants."

Hanneman, the officer who shot Locke, was wearing a body-worn camera and provided a written statement to investigators.

"I felt in this moment that if I did not use deadly force myself, I would likely be killed," he wrote. "There was no opportunity for me to reposition myself or retreat. There was no way for me to de-escalate this situation. The threat to my life and the lives of my teammates was imminent and terrifying."

Hanneman returned to active duty on February 28, less than a month after shooting Locke, a city spokesperson told CNN on Wednesday. "Officer Hanneman was assigned to a role that fits the needs of the department and his service to the City of Minneapolis. That assignment does not include SWAT," according to the spokesperson.

Some renewed calls for an end to the practice of no-knock warrants following Locke's death, and many in leadership positions in departments and policing advocacy groups have said there are almost no circumstances where no-knock warrants are appropriate.

Ellison noted that his office was not allowed to evaluate the case "from the perspective of the victim," and that it would have been "unethical" to file charges in a case that would not be able to prevail, because the law does not support criminal charges.

In their statement, Freeman and Ellison said that Locke might be alive today "absent the no-knock warrant used in this case." But they also said their role in this investigation wasn't to evaluate the use of the warrant -- it was to look at the killing to determine whether criminal charges were warranted.

Storms said the family still plans to move forward with a civil lawsuit and the lack of criminal charges has "no impact" on that plan.

The shooting death of Breonna Taylor in Louisville during warrant service reintroduced the dangers of warrants into the American consciousness. Ellison said that the killing of Locke "calls for reform, and I think it's appropriate for community to engage to have a policy that's going to preserve life for everyone involved."

"I will add this, no-knock warrants aren't particularly safe for officers either. They have attendant risks on both sides, civilians and officers, so it's appropriate to investigate and come up with policy that works," Ellison said at the press conference.

The city garnered significant national media attention in November 2020 when it announced, amid a nationwide reckoning over police policies prompted in part by the murder of Floyd and the killing of Taylor, it was changing its policy. Some touted as an "accomplishment" that Minneapolis Mayor Jacob Frey banned no-knock warrants. But the city did not outright ban no-knock warrants, and like most police department policies, its policy gives wide leeway to field supervisors to make decisions based on conditions they encounter and allows for no-knock warrants in certain situations.

A policy announced after Locke's death required the city's police chief to approve no-knock warrant service. But on Tuesday night, Frey's office said a new policy would prohibit officers from executing no-knock warrants in most cases. The policy will prohibit the MPD from requesting no-knock search warrants and from responding to requests of similar searches from other jurisdictions, according to a Tuesday statement from Frey's office.