SUN PRAIRIE, Wis. (AP) -- The widow of a Wisconsin volunteer firefighter is suing over an explosion that killed her husband this summer.

Abby Barr filed her lawsuit on Thursday, the same day that authorities said no one would face charges in the blast that injured 11 other people and leveled a city block in Sun Prairie.

Barr's husband, Cory Barr, was killed in the July 10 explosion that destroyed a bar he owned.

The lawsuits are against the four companies involved in the construction project: VC Tech, Bear Communications, USIC Locating Services and WEC Energy Group which was doing business as WE Energies.

WE Energies spokesman Brendan Conway says the Milwaukee-based company has not received or reviewed the lawsuits, but does not comment on pending litigation.

SUN PRAIRIE, Wis. (AP) -- A police chief says there will be no criminal charges against anyone related to an explosion in southern Wisconsin that killed a firefighter and leveled several buildings.

Sun Prairie Police Chief Patrick Anhalt said Thursday "There is not probable cause to believe a crime was committed."

Sun Prairie Chief says NO probable cause that a crime occurred that led up to explosion back in July. No one criminally charged @CBS58pic.twitter.com/ikJHzheB9Z

Sun Prairie firefighter Cory Barr was killed in the July 10 explosion that destroyed a bar he owned, five other businesses and a home. Eleven other people were hurt, including five other firefighters and a police officer.

The explosion occurred after a subcontractor installing fiber communication lines struck a gas main. The gas ignited, sending a towering fireball into the evening sky. 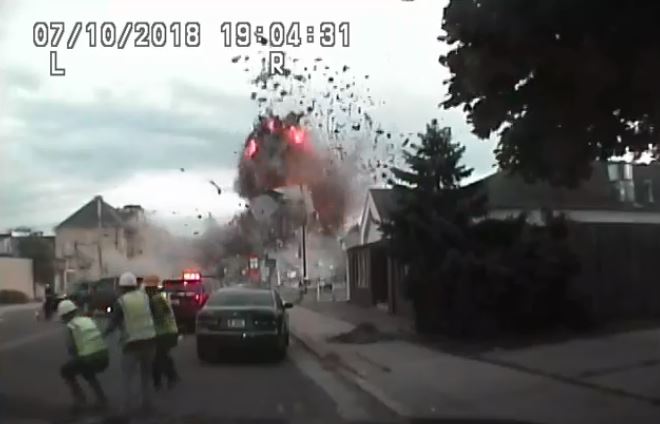 The police chief says the blast occurred after "incomplete and inaccurate information was exchanged and relied upon" by those working on the underground project.

The police department released videos on its website from the day of the explosion. It also released the completed reports.

Watch the press conference below: