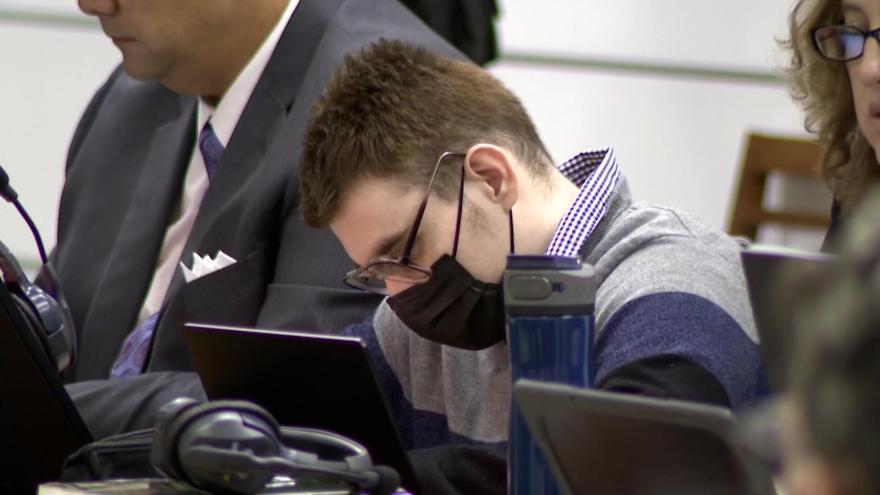 Attorneys for Nikolas Cruz will begin presenting their case to jurors on August 22 that the 23-year-old gunman who killed 17 people and wounded 17 more at a high school in Parkland, Florida, is not deserving of the death penalty.

(CNN) -- An attorney for Nikolas Cruz asked jurors Monday to consider the Parkland school shooter's dysfunctional family life and his serious mental health issues when they decide whether to sentence him to death.

"In telling you Nik's story, in telling you the chapters of his life, we will give you reasons for life," public defender Melisa McNeill said Monday in a Florida courtroom. "That is called mitigation. Mitigation is any reason that you believe that the death penalty is not an appropriate penalty in this case."

In particular, McNeill highlighted his birth mother's abuse of drugs and alcohol during his pregnancy, saying Cruz showed signs from a young age of fetal alcohol spectrum disorder and antisocial personality disorder.

"Because Nikolas was bombarded by all of those things, he was poisoned in the womb. Because of that, his brain was irretrievably broken, through no fault of his own," McNeill said.

The comments were part of the defense's opening statements in Cruz's death penalty trial for the killing of 17 people and wounding of 17 more at a high school in Parkland, Florida, in February 2018. It was the first time jurors have heard from Cruz's defense. His attorneys deferred their initial opening statements, did not cross-examine any students or teachers who survived the shooting and asked only basic questions of other witnesses.

The defense also called its first two witnesses, a woman who testified Cruz's birth mother used drugs and alcohol while pregnant and Cruz's sister, who described life with a "horrible mother."

Cruz pleaded guilty in October to 17 counts of murder and 17 counts of attempted murder, and the ongoing phase of his criminal trial is to determine his sentence. Prosecutors are seeking the death penalty, while Cruz's defense attorneys are asking the jury for a sentence of life in prison without the possibility of parole.

Over three weeks in July and August, prosecutors argued Cruz was "cold, calculative, manipulative and deadly" in carrying out his attack and called to the stand a series of students, teachers, police officers and victims' family members to bear witness to the horrific details of that day. Prosecutors also led jurors on a trip to the untouched scene of the February 14, 2018, mass shooting at Marjory Stoneman Douglas High School.

If jurors recommend Cruz be sentenced to death, they must be unanimous.

In opening statements Monday, McNeill laid out Cruz's difficult family life, including his birth mother's history of addiction and the death of his adoptive parents Lynda and Roger Cruz.

McNeill called Cruz a "damaged and wounded" person and said attorneys plan to show the court disturbing things he said and wrote, his obsessions with guns and devils and even his school shooting "manifesto."

"His brain is broken," she said. "He's a damaged human being. And that's why these things happen."

McNeill also laid out Cruz's interactions with the public education system, which she said proved unable to address his issues.

Cruz had developmental delays early in his childhood, including his difficulty communicating with others. He would bite others, lash out emotionally and was impaired intellectually, McNeill said.

Cruz first received special education services at age 6, struggling in school socially and academically throughout his young life, she said.

He developed a fascination with firearms and, after bringing a weapon to school, was forbidden from carrying a backpack at all, and was escorted from class to class, McNeill said. Still, in October 2016, Cruz and his adoptive mother went to a gun store in South Florida and purchased a rifle.

He attended Stoneman Douglas High School rather than a more specialized special education school, and some school staff raised concerns to authorities about his behavior, according to McNeill.

In February 2017, at age 18 and not on track to graduate, Cruz was told to leave the school, and he literally ran off the campus, McNeill said. A school monitor saw the scene and said, "That kid is going to come back and shoot this school up," according to McNeill.

In November 2017, his mother Lynda Cruz died, which McNeill said uprooted any stability in his life. By the time of the shooting, law enforcement had visited his home more than 40 times, she said.

"We will tell you Nikolas's life story so that we can give you reasons to vote for life. That's what I'm going to ask you to do," she said.

Cruz's sister says their mother was an addict

Carolyn Deakins, a recovering addict who in the 1990s used drugs, drank and worked as a prostitute with Woodard, testified Woodard showed no care for the coming baby and used all her resources to buy drugs and alcohol.

Danielle Woodard, Cruz's sister, similarly testified her mother abused drugs and alcohol throughout their childhood, creating a hostile environment for the children.

"She had an addiction. She always put that first, before me, or him, or Zach (Cruz), or anybody," she said.

"She introduced me to a life that no child should be introduced to," she added. "She had no regards for my life or his life."

Brenda Woodard, who died last year, gave up Cruz for adoption when he was born in 1998. Danielle Woodard testified she held Cruz as a baby but has not been in the same room as him again until court Monday.

The defense case may include testimony from Cruz's siblings. Last week, Judge Elizabeth Scherer granted the state's motion to compel depositions for Zachary Cruz, the gunman's brother, and Richard Moore, who Zachary currently lives with in Virginia. Zachary Cruz and Richard Moore were ordered by the court to appear September 6 for deposition to "answer each and every question that are posed by the state."

During cross-examination, prosecutors asked Danielle Woodward about her relationship with Moore and Michael Donovan, who also lives with Zachary Cruz.

Woodard testified that she has spoken to Moore a couple of times by phone. She said he sent her food during her most recent incarceration and has also sent her money, though she did not know him before the shooting.

Assistant State Attorney Jeff Marcus asked Woodard about her new attorney who was appointed late last week and asked if she knew it was Moore who was paying for the new lawyer. She said no, that it was Zachary Cruz who hired him. The same attorney once represented Zachary Cruz.

Marcus also asked Woodward if she knew that Moore and Donovan produced a reality TV show which features an episode called "Being Zachary Cruz." She said she was unaware of the show.

Susan Hendler Lubar, who previously worked with special needs children in South Florida, testified that Cruz was aggressive and non-communicative when he entered her class at 4 years old.

"Nikolas would push children, would scratch at them, would topple over furniture," she said. "He would stay away from other children and if they got too close to him he would basically pounce."

Hendler Lubar said she began to observe and record his behavior, particularly his aggression and "animal fantasies," in which he would hiss, scratch and curl his hands into paws while acting like an animal.

She said she tried to determine the cause of his behaviors and provide interventions to prevent them. Cruz's aggressive behavior seemed to be caused by his proximity to other children, she said.

The defense presented a form in court that Hendler Lubar had filled out while she was Cruz's teacher. On the form, she noted that the child rarely handled reprimands or redirection without overreacting, rarely cooperated with peers and rarely made friends easily. She also marked that he only sometimes demonstrated self control or followed rules.