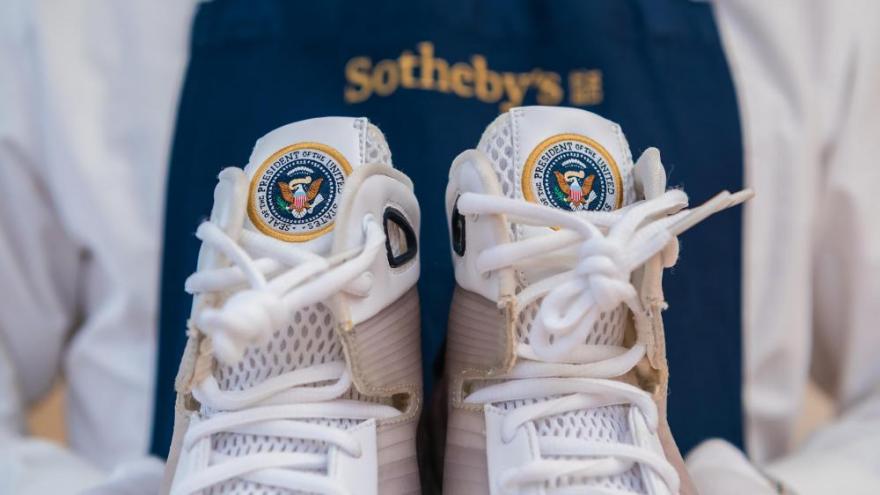 Nike sneakers designed in honor of Obama withdrawn from sale, auction house says. The shoes were set to go on sale Friday for the price of $25,000.

(CNN) -- An exclusive pair of Nike basketball sneakers designed in honor of former President Barack Obama were pulled from the luxury auctioneer Sotheby's ahead of their anticipated sale Friday.

No reason was immediately given for why the item -- a pair of Nike Hyperdunks that was set to go on sale Friday at 4:44 p.m. ET for the price of $25,000 -- was taken down by the person or company that provided them to the auction house, whose identity has not been publicly disclosed.

"I can confirm the item was withdrawn from sale at the request of the consignor," Derek Parsons, a spokesperson for Sotheby's, told CNN in a statement Friday. The company would not provide additional details.

In a previous online listing for the shoes, Sotheby's said the Nikes "are considered one of only two pairs in existence" with the other made for Obama in 2009. The pair that was intended for sale "was not owned, or worn" by the former commander in chief, the site had said.

Asked Tuesday how the sneakers were authenticated, Brahm Wachter, the director of eCommerce development for Sotheby's, told CNN the auction house is confident they were produced by Nike.

A spokesperson for Obama has declined to comment to CNN about the sneakers. Nike has not returned several messages for comment.

The white sneaks feature a dark blue signature Nike "swoosh" with dark blue detailing. The numbers "44" in blue and red stitching are embroidered on the inner side of each shoe and the presidential logo displayed on the tongue flap. Graphics including bald eagles and "1776" are engrained on the insoles.