Nicole Gee, Marine killed in Kabul attack, described as a 'light in this dark world' 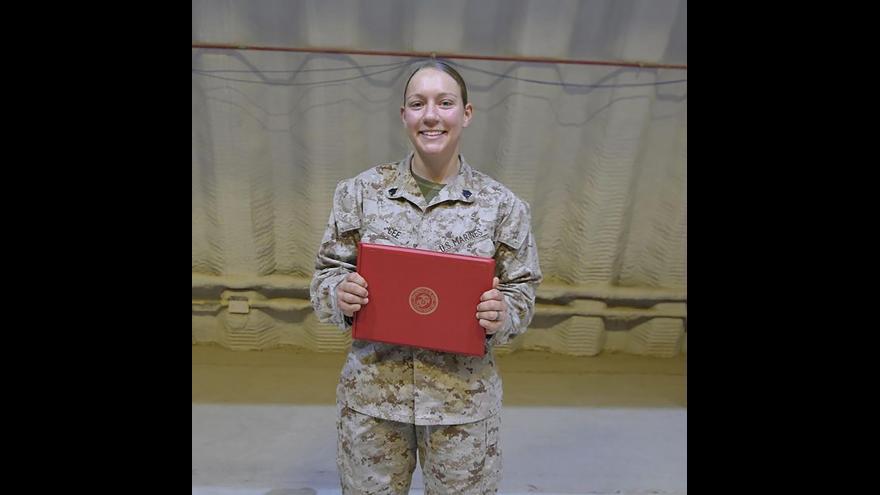 In this image posted to her Instagram account three weeks ago, Gee wrote, "Never would have imagined having my Sergeant promotion meritoriously in Kuwait."

Gee was one of 13 US service members killed in a terrorist attack outside Hamid Karzai International Airport on Thursday that left more than 170 other people dead. At least 20 US Marines were among the hundreds of people wounded.

Just six days earlier, Gee had posted a photo on Instagram, which was also posted on the Department of Defense's social media pages, showing her holding an Afghan infant. Gee captioned the photo, "I love my job."

The Marine Corps sergeant from Sacramento, California, posted another photo from the airport that week showing her in front of a plane beside a long line of people, captioned, "Escorting evacuees onto the bird."

Gee's sister Misty Fuoco Herrera told CNN her sibling was a proud Marine who was incredibly passionate and motivated.

"She was my best friend, my first friend, my motivation and inspiration, the light of my life. I will miss her terribly, as will her many family members and friends," she said.

On a GoFundMe page raising money for family and friends to travel to Gee's funeral, Fuoco said her family was devastated by Gee's death but that her sister had been committed to her work.

"She gave the ultimate sacrifice. We will forever be changed and forever hurt with her absences but I know she wouldn't have had it any other way, she absolutely loved the work she was doing in Afghanistan and was excited to tell me more about it once she was back home."

Fuoco said Gee was married to Jarod Gee, another Marine.

"They had a bond like nothing I've ever seen and I'm so devastated that he has lost the love of his life. She was everything to Jarod, the bright sun to his life," she wrote.

Fuoco said that family had been Gee's priority and that she visited them whenever she could take leave.

"My 2-year old son would ask to FaceTime his 'TT Coley' often and it's hard to wrap my head around the having to explain why we aren't able to call her anymore."

Gee's friend Mallory Harrison posted a powerful tribute on Facebook on Friday, calling Gee "my very best friend, my person, my sister forever. My other half."

"We were boots together, Corporals together, & then Sergeants together. Roommates for over 3 years now, from the barracks at MOS school to our house here. We've been attached at the hip from the beginning," Harrison wrote. "I can't quite describe the feeling I get when I force myself to come back to reality & think about how I'm never going to see her again. How her last breath was taken doing what she loved -- helping people -- at HKIA in Afghanistan. Then there was an explosion. And just like that, she's gone."

Harrison went on to explain that Gee's car has been parked in the lot near the shop where Harrison works, and that she used it while she was getting her own car fixed.

"I drove it around the parking lot every once in a while to make sure it would be good for when she came home," Harrison wrote. "Her car is still there, & she's gone forever."

"My best friend. 23 years old. Gone. I find peace knowing that she left this world doing what she loved," Gee's friend added in the post. "She was a Marine's Marine. She cared about people. She loved fiercely. She was a light in this dark world. She was my person."

On Facebook, the city of Roseville described Gee as a "hometown hero."

In a post, the city said Gee enlisted in the Marines a year after her 2016 graduation from Oakmont High School. Her husband had also graduated from Oakmont, it said.

"Nicole has been described as a 'model Marine' who loved her job. While she was at Oakmont, she played on the softball team and remained in contact with several of her former teachers. Her death hits our school community, our city, and our nation at an especially challenging time.

"Nicole is a hometown hero. Her life and service to our country will never be forgotten," Govea wrote.