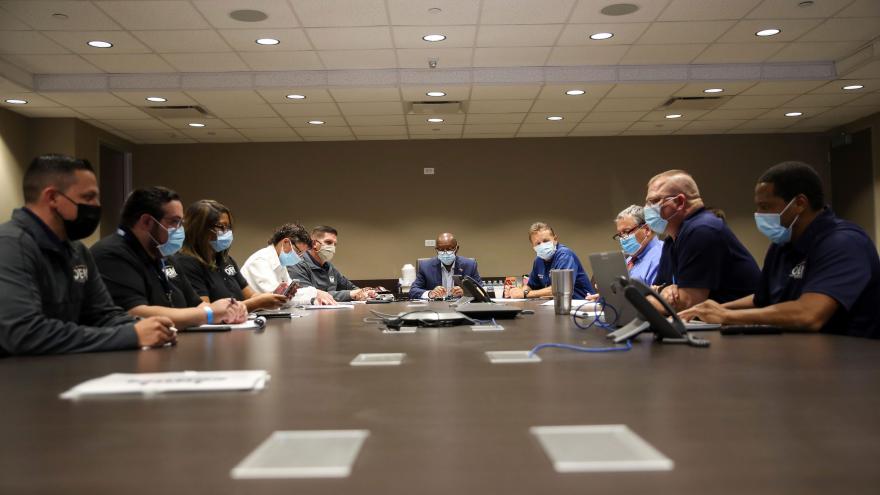 The storm is expected to slow to a crawl over the coming days and dump excessive rain across Texas, Louisiana and southern Mississippi and Alabama, potentially resulting in life-threatening flash and urban flooding. Over 6.5 million people are under flash flood watches that extend from Texas to the Florida Panhandle.

Across Louisiana, widespread rainfall totals of 6 to 10 inches -- and even more in some places -- are likely through Thursday. Nicholas is set to arrive just two weeks after Hurricane Ida slammed Louisiana. About 94,000 customers on Tuesday remained without power there, and Nicholas could sap critical resources as the Ida recovery remains in its early stages.

Nicholas is also likely to pour on places in southwest Louisiana still recovering a year later from Hurricane Laura.

Nicholas first came ashore near the eastern part of the Matagorda Peninsula, about 10 miles west-southwest of Sargent Beach, Texas, at about 1:30 a.m. ET Tuesday, packing 75 mph winds. Since then, it has slowly moved north-northeast and weakened to a tropical storm, with maximum sustained winds of 45 mph, the hurricane center said.

As of midmorning Tuesday, the storm had knocked out power to 480,000 customers in Texas, according to PowerOutage.US.

Among those without power was Bart Stanley, whose family has owned Stanley's General Store in Matagorda, Texas, since 1964. The storm also ripped the canopy off the gas station part of the store, causing the worst damage he's seen in all that time.

Stanley didn't know the extent of damage nearby, but he heard from customers that apart from downed trees and lack of power, homes seem to still be intact, he told CNN.

"I came down here to get our store open so that people could get coffee and gas and whatever else they need because there's no place else for like 30 miles away," he said.

Texas Gov. Greg Abbott on Monday signed an emergency declaration, warning residents to be prepared for Nicholas as a "substantial water event." People should be prepared for "extreme high-water events, including flooding and potential damage caused by the rainfall," Abbott said, adding the system also could spawn tornadoes.

Nicholas threatens the Houston area four years after it was devastated by Hurricane Harvey, a Category 4 storm that stalled over the region and dumped 30 to 40 inches of rain over several days. The flooding that ensued claimed the lives of 68 people -- the highest hurricane death toll in the state since 1919.

"We are expecting anywhere between 4 to 7 inches of rain overnight as well as some wind, which could lead to some power outages," Mayor Sylvester Turner said Monday.

More than 330 flights into or out of Houston's William P. Hobby and George Bush Intercontinental airports have been canceled for Tuesday, according to the flight-tracking website FlightAware. All Port Houston terminals will be closed Tuesday morning, according to its official Twitter account.

Texans should heed local advisories, the governor said, adding the state would make it through the storm as it had many others.

A state of emergency also was declared in Louisiana, which is still recovering from the devastating impacts of Ida two weeks ago.

"The most severe threat to Louisiana is in the Southwest portion of the state, where recovery from Hurricane Laura and the May flooding is ongoing," Gov. John Bel Edwards said. "In this area, heavy rain and flash flooding are possible. However, it is also likely that all of South Louisiana will see heavy rain this week, including areas recently affected by Hurricane Ida."

Ida's death toll in the state has increased to 28 as the East Baton Rouge Parish coroner confirmed two more storm-related deaths, according to a tweet Monday from the Louisiana Department of Health. A 69-year-old man and an 85-year-old woman died due to excessive heat during an extended power outage, the department said.

Continued electricity restoration efforts following Ida could be slowed and some of what has already been restored could be lost for a time due to Nicholas, Edwards said Monday.

Ahead of Nicholas, the National Guard planned on Monday to stage 80 high water vehicles, 23 boats and 15 aircraft across southwest Louisiana and into central Louisiana and will remain ready to respond in southeast Louisiana as necessary, Edwards said.