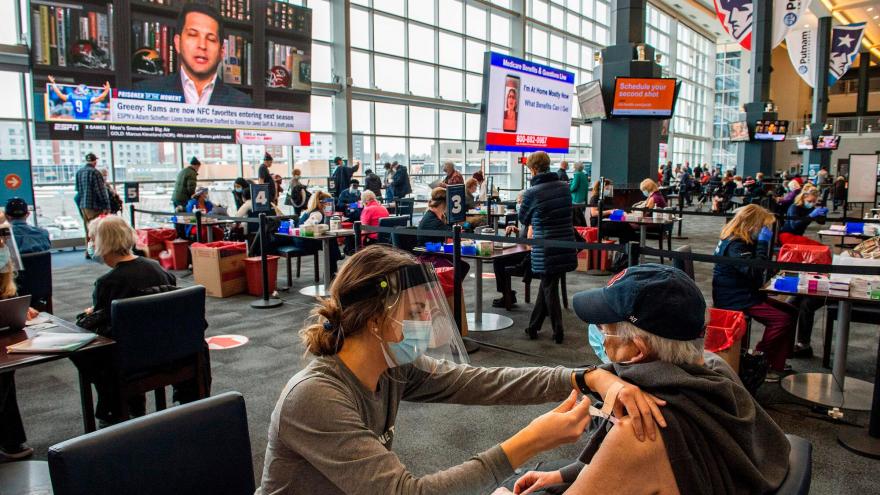 NFL tells the White House it's ready to make every stadium a vaccination site. This image shows medical staff inoculate the public and first responders against Covid-19 at Gillette Stadium in Foxborough, Massachusetts on February 1, 2021.

The offer comes as the Biden administration has promised the opening of mass vaccination sites as part of its push to ramp up the pace of Covid inoculations.

"This is currently being done at seven NFL stadiums today," Goodell wrote. "We can expand our efforts to stadiums across the nation more effectively because many of our clubs have offered their facilities previously as COVID testing centers as well as election sites over the past several months."

The NFL has also been in communication with the White House regarding coronavirus response efforts on another front -- Sunday's Super Bowl. CNN reported earlier Thursday that the President and first lady Jill Biden have taped a video message thanking health care workers that will be shown before the game, according to a source familiar with the plans.

An administration official told CNN that the White House also hoped to use Sunday's event to combat vaccine hesitancy and speak to the African American, Latino and White, rural "non-mask-wearing" communities in particular. The Super Bowl presents "an interesting opportunity to reach all three of those audiences," the official said.

The White House has been in touch with the NFL and other brands involved in the Super Bowl on ways to integrate pro-mask and pro-vaccine messaging in the highly watched event, one White House official said. The official declined to elaborate further on the extent of the White House's collaboration with the league or specific companies.

The NFL, for its part, has consulted with public health officials in preparation for the weekend and announced a set of protocols including mandatory mask-wearing and social distancing to prevent the spread of Covid at this weekend's game.

Goodell referenced in the letter to Biden that the league has also invited 7,500 vaccinated health care workers to the game "who will attend as our guests in gratitude for their heroic service and to highlight the importance of vaccinations as our country recovers from the pandemic."

According to the NFL, some 14,500 people will be in attendance through general admission, and another 2,700 fans will be in stadium suites.