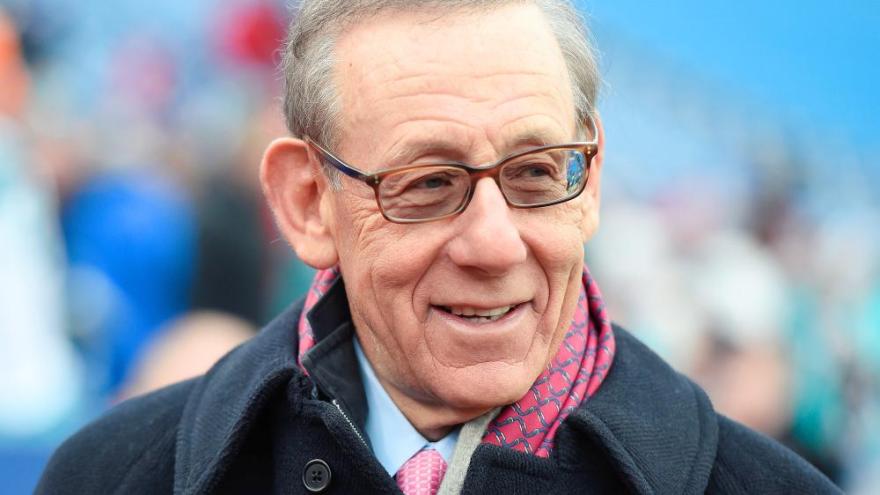 The NFL suspended Miami Dolphins owner Stephen Ross six games into the 2022 season and fined him $1.5 million for violating policies related to integrity of the game.

(CNN) -- The NFL stripped the Miami Dolphins of two draft picks and suspended and fined owner Stephen Ross after a probe into allegations of tampering and tanking found that his team had impermissible contact with star quarterback Tom Brady and the agent of former Saints coach Sean Payton.

The investigation, led by former US Attorney and SEC Chair Mary Jo White and lawyers from the Debevoise law firm, determined that the Dolphins violated anti-tampering rules on three occasions, the NFL announced in a news release Tuesday. The investigation also found that the team did not intentionally lose games, known as tanking, but noted that Ross repeatedly suggested that the team should prioritize its draft position over winning games during the 2019 season, the release said.

"With regards to tampering, I strongly disagree with the conclusions and the punishment," Ross said in a statement posted on the Miami Dolphins Twitter account. "However, I will accept the outcome because the most important thing is that there be no distractions for our team as we begin an exciting and winning season. I will not allow anything to get in the way of that."

The investigation found that the Dolphins had "impermissible communications" with Brady in 2019-20 while he was a member of the New England Patriots and again during and after the 2021 season when he was under contract with the Tampa Bay Buccaneers, according to the NFL release. Those second discussions focused on Brady "becoming a limited partner in the Dolphins and possibly serving as a football executive," and also included the possibility of playing for the Dolphins, the investigation found.

The league found Dolphins Vice Chairman Bruce Beal spearheaded the contact with Brady and fined him $500,000. The Dolphins had no comment when asked about Beal's actions.

Further, in January 2022, the Dolphins had "impermissible communications" with the agent of Payton, who at the time was the New Orleans Saints head coach and has since retired.

"The investigators found tampering violations of unprecedented scope and severity," NFL Commissioner Roger Goodell said in a statement. "I know of no prior instance of a team violating the prohibition on tampering with both a head coach and star player, to the potential detriment of multiple other clubs, over a period of several years. Similarly, I know of no prior instance in which ownership was so directly involved in the violations."

The investigation also examined whether the Dolphins intentionally lost games in the 2019 season to improve their draft position, known as tanking. The Dolphins ultimately finished the 2019 season with a 5-11 record and earned the fifth pick in the 2020 NFL draft.

The NFL investigation found the team did not lose games intentionally nor did any member from the club, including Ross, instruct then Dolphins coach Brian Flores to lose games, according to the release. However, the investigation found that Ross repeatedly expressed his belief that the team's draft position should take priority over the win-loss record.

In February, Flores told CNN that Ross explicitly told him he would give him $100,000 for each game Flores would lose. Ross denied the accusations at the time, calling the claims "baseless, unfair and disparaging."

The investigation found that people had "differing recollections about the wording, timing, and context" of the claimed offer, according to the NFL news release.

"However phrased, such a comment was not intended or taken to be a serious offer, nor was the subject pursued in any respect by Mr. Ross or anyone else at the club," the release states.

Goodell said in a statement that the comment, even if made as a joke, risked damaging the integrity of the game.

"Every club is expected to make a good faith effort to win every game," he said in a statement. "The integrity of the game, and public confidence in professional football, demand no less. An owner or senior executive must understand the weight that his or her words carry, and the risk that a comment will be taken seriously and acted upon, even if that is not the intent or expectation. Even if made in jest and not intended to be taken seriously, comments suggesting that draft position is more important than winning can be misunderstood and carry with them an unnecessary potential risk to the integrity of the game."

He praised Flores, who was fired earlier this year and has sued the Dolphins, the NFL and other teams alleging racial discrimination, for continuing to try to win games. The NFL and teams have denied the allegations.

"The comments made by Mr. Ross did not affect Coach Flores' commitment to win and the Dolphins competed to win every game," Goodell said. "Coach Flores is to be commended for not allowing any comment about the relative importance of draft position to affect his commitment to win throughout the season."

Flores and attorneys say he was proved correct

In a statement, Flores expressed his disappointment in what he says is the NFL investigation downplaying Ross's comments on tanking.

"I am thankful that the NFL's investigator found my factual allegations against Stephen Ross are true," Flores said. "At the same time, I am disappointed to learn that the investigator minimized Mr. Ross's offers and pressure to tank games especially when I wrote and submitted a letter at the time to Dolphins executives documenting my serious concerns regarding this subject at the time which the investigator has in her possession."

"We are certainly disheartened that the investigator, and apparently the Commissioner, excused highly inappropriate comments that go to the heart of the game's integrity regarding tanking as being in jest especially when there was a letter written by Coach Flores at the time demonstrating the gravity with which these comments were received by Coach Flores," they said in a statement.

"The punishment announced today is obviously inadequate and disheartening. Unfortunately, it remains clear that the NFL cannot police itself, which is why we look forward to continuing to push the legal process, prove all of Brian's claims, as well as those of a class of black executives, coaches and candidate, and force real change upon the NFL."

Meanwhile, Ross in his statement said the investigation had cleared the Dolphins of tanking.

"The independent investigation cleared our organization of any issues related to tanking and all of Brian Flores' other allegations," he said. "As I have said all along, these allegations were false, malicious and defamatory, and this issue is now put to rest."