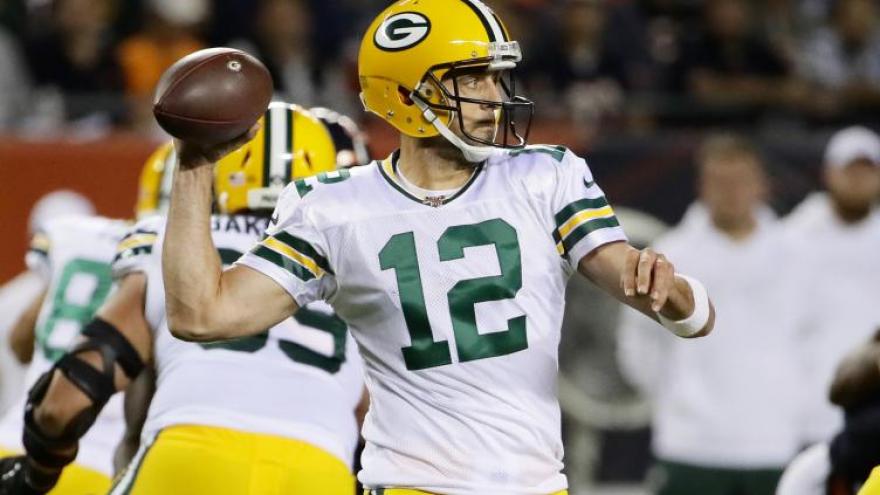 The holidays are rapidly approaching, but most NFL teams are anything but jolly. That's because squads are facing the pressure of a playoff push, and most spots are up for grabs.

Aaron Jones ran for two scores and Davante Adams caught another as the Green Bay Packers defeated the Chicago Bears 21-13 in the 200th edition of the NFL's oldest rivalry.

Green Bay defeated Chicago 10-3 in the season opener. The Packers improved to 19-5 against their NFC North rival with Rodgers as the starting quarterback.

Green Bay clinches a playoff berth if the Rams lose at Dallas.

(CNN) -- The holidays are rapidly approaching, but most NFL teams are anything but jolly.

That's because squads are facing the pressure of a playoff push, and most spots are up for grabs.

Matchups across Week 15 will have direct implications about which teams will be staying home when playoffs start in January and which will be fighting for the ultimate prize of a Super Bowl trophy.

Things looked grim for the Chicago Bears after Week 11. The team had just lost their fourth straight game, rival Green Bay sat atop the conference, and the Minnesota Vikings resided in second place. After that loss, Chicago offensive coordinator Mark Helfrich admitted being a little weary: "It's frustrating ... It's all of us ... identifying all these problems that have been pointed out. Now we have to coach better and execute."

It seems the Bears have identified the problems, ripping off three straight wins following that week 11 loss to the Los Angeles Rams. Part of that could be Chicago's strong second-half starts, but it could also be the Bears' competition. Of those three wins, only one was against a potential playoff team, and that team was the Dallas Cowboys, who are barely clinging to life in the NFC South.

Against the Packers, the Bears will need to step up their play against one of the league's best teams. For Chicago safety Ha Ha Clinton-Dix, a former Packer, it's a chance to catch up with old teammates on the field: "Being able to compete against your friends, it makes the game a little more fun, a little more competitive."

Clinton-Dix is known for making former teams pay, recording two interceptions against his last club, the Washington Redskins, earlier this season. But Clinton-Dix doesn't expect a similar performance against his team from 2014 to 2018.

"If Aaron Rodgers decides to bless me and throw me the ball twice, I'll be happy as hell," he said. "Unfortunately, A-Rod doesn't work that way. He's the best quarterback in the game."

But this 200th meeting of two of the league's premier franchises has a little extra meaning for Rodgers and the Packers. The Bears eliminated Green Bay from playoff contention last year, and this year, the shoe is on the other foot. Packers running back Aaron Jones knows it: "They kind of sent us home last year ... You don't forget those kinds of things."

Last year, Chicago eliminated Green Bay at Soldier Field. This year's contest is at Lambeau Field, and as Jones said with a smile: "I knew we could end their postseason." Whether the Pack can do so is a question for Sunday.

Along with the Bears, the Tennessee Titans were one of the teams that looked lost midway through the season. Head coach Mike Vrabel decided to make a change after the team fell to 2-4, benching quarterback and former second overall pick Marcus Mariota in favor of veteran Ryan Tannehill. It's a move that has paid off, with the Titans going 6-1 since Tannehill became the signal-caller.

But Tannehill credits Mariota as a crucial resource during the run, listing off the now-backup's responsibilities: "He's just been supportive, we're able to talk through things on game day ... he helps me watch the tape and he does everything he can possibly do to help me and this team along."

With a win, Tannehill and Tennessee can match the team's win total from the past three seasons. The former Aggie from Texas A&M will look to go further, as the Mariota-led Titans never eclipsed nine wins and only once made the playoffs.

On the opposite sideline is the obstacle that could keep the Titans out of the playoffs once again. The Houston Texans have made the postseason three of the last four seasons and currently hold the tiebreaking advantage against their AFC South foes. If the playoffs were to start today, the Texans would win the division and Tennessee would be the first team out of the playoff picture.

What should give the Titans hope is the inconsistency of the Texans. Houston can't seem to take a step forward without taking one back. For every gutsy win over a top-tier squad like the Patriots comes an equally bad loss. Last week it was to the Denver Broncos.

It's a matchup with a lot of emotional ties. For example, Tennessee lineman Dennis Kelly is the brother of Texans offensive coordinator Tim. Beyond that, it offers former teammates a chance to run into each other. Texans offensive tackle Laremy Tunsil spoke highly of Tannehill, as the two spent several seasons with the Miami Dolphins: "That's my guy. I'm glad he's balling up there. I knew he could."

3. Cowboys and Rams in desperate need of win to remain relevant in division race

It's been a tough season for the Los Angeles Rams, but at least they can take solace in the fact that they aren't alone. The ever steady presence of the New England Patriots aside, most teams follow Super Bowl runs with a subpar season.

In 2007, former NFL GM Charley Casserly listed off the reasons a Super Bowl trip is hard to follow. "Several elements come into play the following year: a shorter offseason, contract issues, more demand for your players' time. Once the season starts, you become the biggest game on everybody's schedule," said the former Executive of the Year, who won three titles with the Washington Redskins.

But the fate of the Rams stings a little worse. The team is a respectable 8-5 but must contend with the elite company of San Francisco and Seattle, who pace the NFC West with 11 and 10 wins, respectively. The Rams are currently on the outside of the playoffs looking in, but running back Todd Gurley has a positive for his team when facing Dallas: "It's Week 15 in the league, man. Nobody is feeling well-rested."

That's doubly true for the Cowboys, with key players like quarterback Dak Prescott and wide receiver Amari Cooper limited in practice with lingering injuries. That's not to say all is lost for America's Team, as they have an easier road to the playoffs than the Rams. Despite the injuries and rumors of a coaching change, Dallas remains in first place in the NFC East, tied with the Philadelphia Eagles.

Even a mediocre 6-7 record hasn't gotten the team down. "Anything and everything up to this point has meant absolutely nothing," said Prescott. "The only thing that matters is if we're winning this day."

Tight end Jason Witten agrees: "Everybody has the conviction, the mindset ... We just have to go do it."