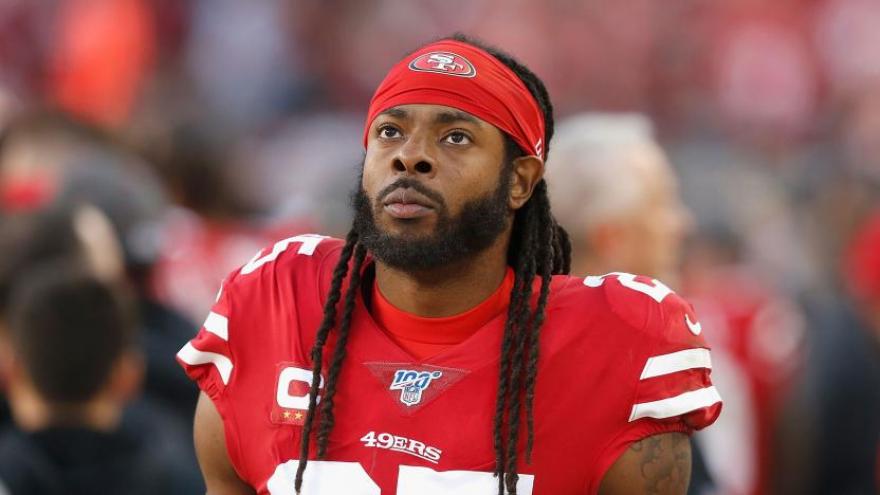 (CNN) -- NFL star Richard Sherman was arrested early Wednesday after allegedly trying to break into the home of his in-laws and fighting with officers in Redmond, Washington, police said.

The former San Francisco 49ers cornerback was being held at King County Correctional Facility after being booked by Redmond Police at 6:08 a.m., according to the King County Prosecuting Attorney's Office.

He was expected to have an initial court appearance Thursday.

In a statement, Redmond police said officers located Sherman about 1:50 a.m. Wednesday after receiving a report that he was "attempting to force entry into a family member's home."

"Officers arrived and located Sherman outside the home," Redmond police said. "The suspect fought with officers while being taken into custody, resulting in a Redmond K9 team being deployed to assist in gaining control."

Lowe said officers initially spoke with Sherman and "even joked with him" but that the football star tried to walk away and resisted when told he was under arrest and then got into an altercation with officers.

Washington State Patrol troopers were also at the home investigating a hit and run, according to police. A man was "suspected of leaving his severely damaged vehicle and fleeing on foot" after hitting a cement barrier at a work zone on State Route 520, police said.

The State Police said troopers went to the home of the in-laws after the heavily damaged SUV -- one of its wheels nearly detached -- was traced to Sherman and after learning that Redmond officers had been called to the residence for an unrelated incident involving the football player.

Washington State Patrol Capt. Ron Mead told reporters that troopers were called to a highway construction site on State Route 520 about 1:26 a.m. A highway workers called 911 to report a possibly impaired driver barreling into the work zone and fleeing, he said.

"We're very fortunate that there were no injuries," Mead said.

Mead said Sherman is also under investigation for possible hit and run and driving under the influence. State troopers obtained a search warrant for a sample of Sherman's blood and results are pending, Mead said.

Lowe said officers reported Sherman had the "odor of an intoxicant" on his breath at the time of his arrest.

"Despite what is listed as a "charge" on the jail roster, Mr. Sherman has not been criminally charged," said the statement from the prosecuting attorney's office.

The prosecuting attorney's office is awaiting a first appearance document before making a charging decision, the statement said.

Sherman, who is a free agent, is a vice president on the executive committee of the NFL Players Association.

"We were made aware of an arrest last night of one of our player leaders for an alleged domestic violence incident and have activated our domestic violence crisis protocol for the protection and support of everyone involved," the union said on Wednesday via Twitter.

"We will continue to monitor events closely as more facts are made available to us."

The NFL, in a statement to CNN, said: "Free agents are eligible to sign with any team. The league investigates any incident involving law enforcement and if there is a violation of the personal conduct policy the player would be facing discipline."

CNN is attempting to reach Sherman for comment. It's not clear whether he has an attorney.

Sherman, a 33-year-old Stanford University graduate, is a 10-year league veteran who played seven seasons with the Seattle Seahawks before joining the 49ers for the 2018 season.

He has played in five Pro Bowls.

Sherman, who was born in Compton, California, and grew up in Los Angeles, has been considered an elite cornerback.

He has been a player's association representative since 2014, according to the union's website. He was voted onto the NFLPA's executive committee in 2016 and re-elected in 2018 and 2020.