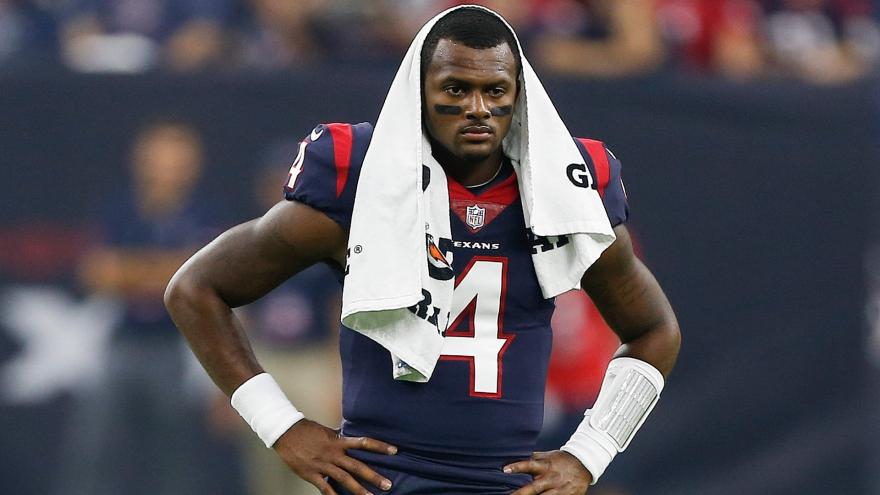 (CNN) -- Houston Texans star quarterback Deshaun Watson is being sued for alleged sexual assault by three women he had contacted to perform massage therapy, according to court documents.

The lawsuits were filed this week in Harris County, Texas, by attorney Tony Buzbee, who represents the three women.

On Tuesday, Watson denied any wrongdoing regarding the first lawsuit. Watson's attorney Rusty Hardin told CNN he was not planning to comment Thursday.

The Houston Texans issued a statement Thursday that said the NFL "informed us today that they will conduct an investigation into the allegations made in the civil lawsuits filed against Deshaun Watson."

"We continue to take this and all matters involving anyone within the Houston Texans organization seriously," the statement said. "We do not anticipate making any additional statements until the NFL's investigation concludes."

When asked if the league had opened an investigation, NFL spokesperson Brian McCarthy said, "The matter is under review of the personal conduct policy."

The most recent lawsuit was filed late Wednesday. It alleges Watson sexually assaulted and harassed a massage therapist by forcing her to perform oral sex in December 2020.

The woman was "perplexed" and became "uncomfortable" when she entered the room and saw Watson on his stomach with only a small towel, he brought himself, covering his buttocks, according to the lawsuit. Not wanting to upset Watson, the woman started to massage his lower back but Watson then aggressively started dictating the massage repeatedly asking her to focus on his "inner thighs" and "inner glutes," the lawsuit alleges.

"Watson made clear, repeatedly, that he was a professional football player who could help, or hurt, her career," the lawsuit alleges.

"Watson kept coercing and intimidating Plaintiff and it was at this point that Watson coerced Plaintiff to move her mouth towards his penis, forcing Plaintiff to perform oral sex on him. Plaintiff did not consent to any of this conduct. Plaintiff blacked out for a few minutes from the fear," according to the lawsuit.

The first lawsuit was filed on Tuesday, and a second one on Wednesday, both accusing Watson of sexual assaulting on two women who were giving Watson a massage on separate occasions.

The first lawsuit alleges that Watson assaulted an unnamed licensed massage therapist "by touching her with his penis" while receiving a massage at the therapist's home in March 2020.

The suit says Watson "wanted a massage for only one reason -- sex."

Watson denied the allegation in a statement posted on Twitter.

"As a result of a social media post by a publicity-seeking plaintiff's lawyer, I recently became aware of a lawsuit that has apparently been filed against me," Watson tweeted on Tuesday. "I have not yet seen the complaint, but I know this: I have never treated any woman with anything other than the utmost respect.

CNN reached out to Buzbee on whether a six-figure settlement was offered to Watson but has not received a reply.

The lawsuit alleges that the therapist left Watson alone in the massage room of her home and when she returned, "Watson was lying on the massage table completely naked with only a small towel covering his groin area ... Watson then began to aggressively dictate how he wanted the massage to be performed. Watson emphasized to Plaintiff that she not use her knuckles or elbows during the massage. Instead, Watson told Plaintiff she was only to use her hands. And, Watson repeatedly stated that he wanted her focus to be on his groin area."

The lawsuit says the woman "began to feel extremely uncomfortable" and was trying to find a way to "extricate herself from the situation."

"At one point, he purposedly exposed the tip of the penis from under the towel," the lawsuit alleges. "As a result of his moving of his hips, Watson purposedly touched Plaintiff's hand with the tip of his erect penis."

The lawsuit says that the therapist "was shocked and mortified" and ended the session.

Watson left the "home without further incident" and later apologized via text for the alleged incident, according to the suit.

"Too many times women have put up with behavior that we all know no one should put up with," Buzbee wrote on Facebook and Instagram on Tuesday. "All people are equal, and all deserve dignity and respect."

The woman is "seeking the minimal compensatory damages" as well as court costs and punitive damages, the lawsuit notes.

Another woman alleges assault in August 2020

The second lawsuit alleges Watson assaulted and harassed an unnamed masseuse in August 2020 at a hotel in Houston by "touching her with his penis and exposing himself." The lawsuit says the woman, who lives in Atlanta, was flown in for the massage.

"Watson's behavior is part of a disturbing pattern of preying on vulnerable women," the court document says.

According to the lawsuit, Watson wanted the massage to focus on his glutes and groin area and also inquired about quads and the Achilles.

The lawsuit says Watson was nude on the massage table and that the plaintiff said he needed to use a towel to cover himself. However, Watson refused, the lawsuit states, saying he "gets hot easily" and wanted to remain nude. The lawsuit says that Watson "kept aggressively" directing the woman to work on his anus, which made her uncomfortable.

"Watson then got more specific and asked Plaintiff to work on the inner part of his anus," the lawsuit says. "Plaintiff ignored this request because it was odd and decided to start working on Watson's inner thigh area. Watson got more aggressive, now telling Plaintiff to go higher and higher towards his penis."

The woman said no but Watson "kept insisting, saying 'come up more' and 'go here' towards his genitals," the court document says.

The lawsuit also says it was at this point that Watson moved in her direction, causing her to touch his genitals. After Watson flipped over, exposed, the lawsuit says, the woman said for Watson to cover himself with a towel, but Watson refused. The woman stopped the massage and said she needed to leave.

The Harris County Sheriff's Office has not opened any investigations into Watson, according to Senior Deputy Thomas M. Gilliland.

Watson has played four seasons in Houston and has been selected for three Pro Bowls. According to the Spotrac website, he signed a four-year, $156 million contract in 2020.