NFL reveals protocols that ban autographs and jersey exchanges, but no changes in-game 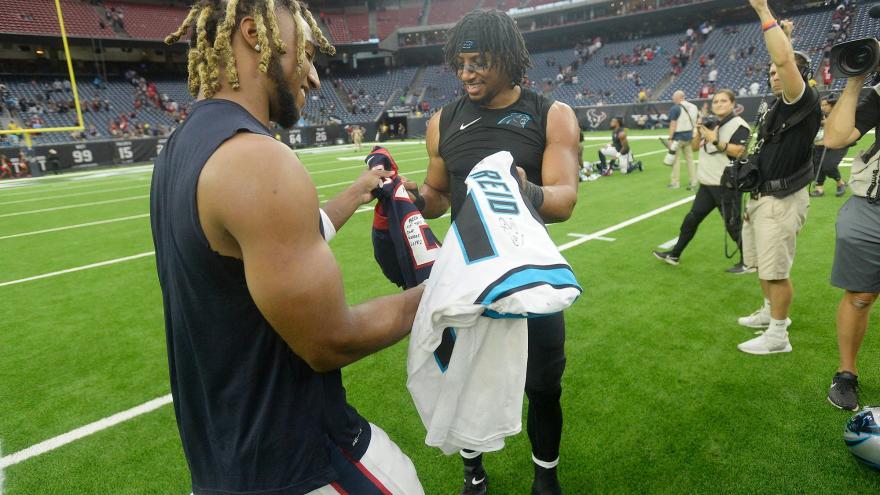 The NFL is banning post-game jersey exchanges between players during preseason games.

(CNN) -- The NFL has no issues with players battling in the trenches and tackling each other while playing a full-contact sport where it is impossible for players to physically distance from one another.

However, in the league's upcoming preseason, the NFL will no longer allow the traditional jersey exchanges between opposing players after the game.

In a league-wide memo sent to the 32 teams on Wednesday night and obtained by CNN, the NFL has outlined specific game-day protocols for the upcoming preseason. With the exception of players and coaches, everyone on the sideline bench area will be required to wear a mask. Those players not substituting into the game are strongly encouraged to wear a face covering. The league says it will provide disposable masks within the bench area.

Some players reacted to the protocols on social media -- specifically the ban of jersey exchanges.

San Francisco 49ers cornerback Richard Sherman tweeted on Thursday, "This is a perfect example of NFL thinking in a nutshell. Players can go engage in a full contact game and do it safely. However, it is deemed unsafe for them to exchange jerseys after said game."

Philadelphia Eagles cornerback Darius Slay posted on Thursday, "So we can tackle each other for 60min but can't exchange jersey that takes 2 mins."

A letter from NFL Commissioner Roger Goodell accompanying the memo states that the player's union, the NFL Players Association, has agreed to the game mandates. The letter acknowledges, though, that protocols surrounding the screening and testing of players are still being finalized.

On Tuesday, player's union president and Cleveland Browns center J.C. Tretter tweeted, "The NFLs unwillingness to follow the recommendations of its own experts will put this season and the safety of all players at risk."

Tretter wrote on the union's website Tuesday that "the NFL is unwilling to prioritize player safety and believes that the virus will bend to football."

Other details revealed in the memo include:

The NFL released its schedule for the 2020 season in May, but there is still the possibility of the season being canceled or postponed.

Dr. Anthony Fauci, the director of the National Institute of Allergy and Infectious Diseases, previously said that NFL games could be the "perfect setup for spreading" coronavirus. With a surge in coronavirus cases sweeping across the US, it may not be possible for the league to safely host games even without fans in the stands.