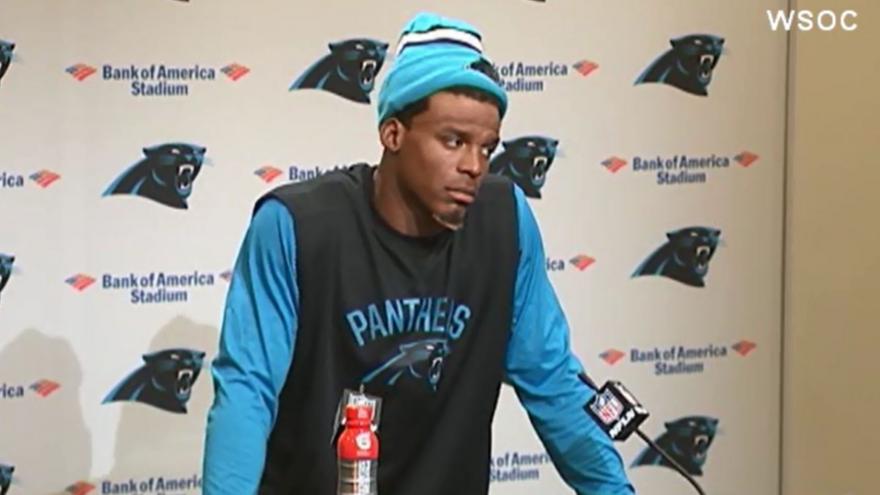 CHARLOTTE, N.C. (AP) — Cam Newton has "expressed regret" for his response to a female reporter's question at a news conference Wednesday, a team spokesman said.

After Newton's comments, the quarterback proceeded to answer Rodrigue's question.

Carolina spokesman Steven Drummond said in a statement to The Associated Press that Newton had a conversation with Rodrigue after the news conference ended and expressed regret for his remarks.

Rodrigue released a statement through The Charlotte Observer via email saying that Newton did not apologize when they spoke after the news conference.

She said she "was dismayed by his response, which not only belittled me but countless other women before me and beside me who work in similar jobs. I sought Mr. Newton out as he left the locker room a few minutes later. He did not apologize for his comments."

NFL spokesman Brian McCarthy said Wednesday night in a statement that Newton's comments "are just plain wrong and disrespectful to the exceptional female reporters and all journalists who cover our league. They do not reflect the thinking of the league."

Drummond said the Panthers "strive as a department to make the environment for media comfortable for everyone covering the team."

Mike Persinger, the executive sports editor of The Charlotte Observer, said Newton's comments were "unfortunate and out of line."

"The question Jourdan asked during the news conference was a good one, like countless other questions about football strategy and nuance she has asked in the course of doing her job," Persinger said.

She said on on Twitter : "I don't think it's 'funny' to be a female and talk about routes. I think it's my job."

I don't think it's "funny" to be a female and talk about routes. I think it's my job.