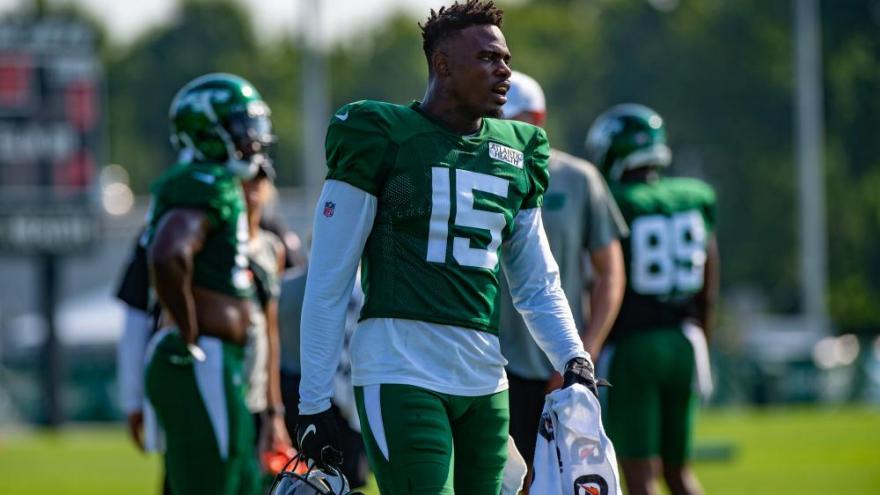 NFL wide receiver Joshua Bellamy is facing a slate of fraud charges for allegedly participating in a scheme to use coronavirus relief funds for personal use, the Justice Department said.

(CNN) -- NFL wide receiver Joshua Bellamy is facing a slate of fraud charges for allegedly participating in a scheme to use coronavirus relief funds for personal use, the Justice Department said Thursday.

Bellamy -- who was cut by the New York Jets earlier this week -- was charged in the Southern District of Florida with wire fraud, bank fraud and conspiracy to commit wire fraud and bank fraud. He allegedly obtained a Paycheck Protection Program loan of $1,246,565 for his company, Drip Entertainment LLC, and used more than $104,000 of the funds on luxury goods, including purchases at Dior, Gucci and various jewelers, the department alleges.

The Justice Department said in a news release that the scheme started when Bellamy's associate had obtained a fraudulent PPP loan for his talent management company using falsified documents.

"After submitting that application, (the associate) then began to work with other co-conspirators, including Bellamy, on a scheme to submit numerous fraudulent PPP loan applications for confederate loan applicants, in order to receive kickbacks for obtaining the forgivable loans for them," the release stated.

When reached by CNN, the Jets said, "Josh is no longer with us."

In an email, Bellamy's attorney's -- Jeff and Diego Weiner -- said the case is in an early phase.

"Josh Bellamy is a good and decent man, who is presumed innocent by our laws," the attorneys said. "We hope that the public will give him the benefit of the doubt at this time. All too often, professional athletes are taken advantage of by people who are purportedly acting on their behalf as agents or advisors. We will all know more as the case progresses."

Prosecutors alleged that Bellamy also spent approximately $62,774 in PPP loan proceeds at a Seminole Hard Rock Hotel and Casino, and withdrew more than $302,000. He also allegedly sought PPP loans on behalf of his family members and close associates.

Congress and the White House had approved a record-breaking $2 trillion stimulus package in March to cushion the economic blow from the pandemic. The federal relief package included forgivable loans in the PPP program designed to keep afloat small businesses hurt by the health crisis.

In recent months, however, federal authorities have unsealed charges against individuals who allegedly abused PPP loans. The Justice Department's Criminal Division announced earlier Thursday that they had charged more than 50 people for fraudulently applying for PPP loans in order to line their pockets and purchase luxury items.

"Unfortunately, the rapid injection of trillions of dollars in PPP loans into the economy has created a very high risk for fraud at a time when many organizations and their employees are already operating under the kind of intense financial pressure that often leads to fraud and embezzlement," John Warren, general counsel for the Association of Certified Fraud Examiners, previously told CNN.

Seventy-six perfect of certified fraud examiners expect a rise in loan fraud over the next year, according to an ACFE survey.