NFL Draft: Everything you need to know 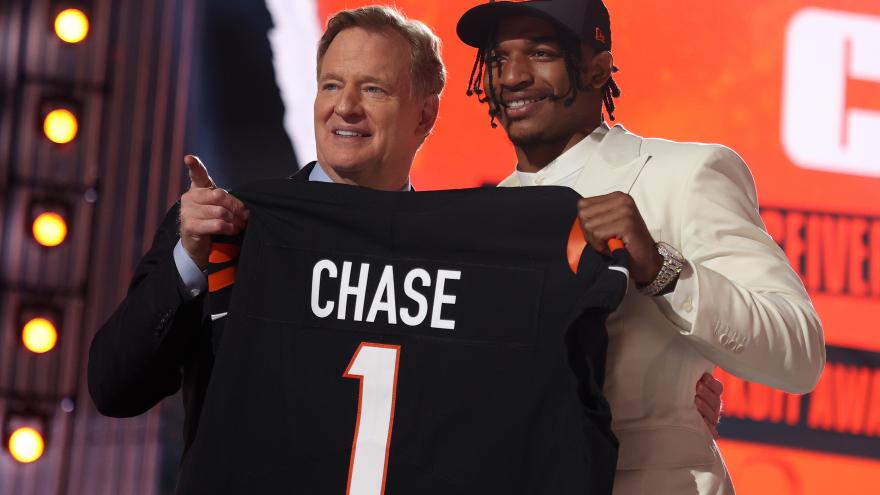 (CNN) -- Over the past three years, the NFL Draft has attracted an average viewership of between six and eight million people throughout the three-day event.

Its popularity trumps that of any other major league sports draft in the United States, becoming a signature event for the NFL over the course of its 87-year history by offering fans a first glimpse at the league's future stars.

With all eyes on the teams and potential franchise-altering players on the line, it is useful for fans to understand how the draft works, how picks are awarded and the rules that govern everything from player eligibility to how long teams have to decide on their selections.

This year, the 2022 NFL Draft begins on April 28 and ends on April 30 and will be broadcast on the NFL Network, ABC, ESPN and ESPN Deportes. Here's what you need to know.

How does the draft work?

The draft is seven rounds, with each of the 32 NFL teams receiving an automatic pick in each round. The event spans three days, with the first round taking place on Thursday, the second and third rounds on Friday and the remaining fourth through seventh rounds on Saturday.

Each team is assigned a table at the designated venue -- this year at the home of the Las Vegas Raiders, Allegiant Stadium -- where team selection representatives sit.

The representatives stay in contact with executives making the final decisions back at team headquarters and communicate each selection to NFL staff before officially announcing them to the world.

Should time expire before a team has submitted its pick, the team is still allowed to make a selection; however, this would leave the door open for the next team(s) to make their pick ahead of them.

When it comes to selecting the best future NFL talents, you're going to want to be timely.

How is the draft order assigned?

Teams draft in the opposite order of the final standings of the previous season, with the regular season last-placed finisher drafting first, and the remaining non-playoff qualifiers taking picks 2-20 following the same order.

The teams that did make the playoffs are calculated both by how far into the postseason they advanced in addition to their regular season standings.

If teams also had identical strengths of schedule, then it moves into division and then conference records. If this still does not break the tie, or if the teams involved are from different conferences, there are seven additional tiebreakers: head-to-head, win-loss-tie percentage, strength of victories, points scored vs. points allowed, net points per game, total net touchdowns and finally a coin toss.

So each team gets seven total picks and drafts in reverse order of how they finished the previous season?

Not quite. In addition to the seven standard picks awarded to each team, the league also began awarding supplemental "compensatory free agent" picks under the 1993 Collective Bargaining Agreement.

Compensatory picks were created with the goal of evening the playing field for teams that experienced significant losses due to free agency.

According to the league, any "team losing more or better compensatory free agents than it acquires in the previous year is eligible to receive compensatory draft picks," which are spread throughout the third through seventh rounds.

The way in which compensatory picks are bestowed on teams is decided based on a confidential formula concocted by the NFL Management Council, but several known variables are included, such as player salary, playing time and postseason accolades.

So if you lose a big name player like Tom Brady to free agency, you could be awarded additional picks in the next draft.

In the actual case of Brady, the New England Patriots were awarded the 96th and 140th overall picks in the 2021 NFL Draft.

The league can award up to 32 compensatory free agent picks but can award additional compensatory picks to teams who hire minority coaches or executives in positions that are equivalent to or higher than their previous positions.

In total, the NFL awarded 39 compensatory picks to 16 different teams for the 2022 Draft.

If picks are the meat of the draft, trades are the spice. Teams can agree to pick-for-player trades throughout the entire trade period all the way up until the trade deadline during the season.

So while teams start with seven picks -- plus any compensatory picks awarded by the league -- they can gain or lose picks depending on their trades.

The Kansas City Chiefs gained five draft picks, three in 2022 and two in 2023, when they traded six-time Pro Bowl wide receiver Tyreek Hill to the Miami Dolphins. This ties the Chiefs for the most picks heading into the 2022 Draft, along with the Jacksonville Jaguars, with 12 selections available to each.

Teams can trade for or with future draft picks up until the trade deadline, but they can also make trades during the draft itself.

Patriots coach Bill Belichick has been known in particular for his "pick hoarding" practices on draft day -- trading players or higher draft picks (pick-for-pick trades) to acquire as many total picks as possible.

"Pick hoarding" became a more viable option for teams back in 2011 under the new Collective Bargaining Agreement, which established a rookie salary cap in order to allow teams to test their athletes at an NFL level before handing out massive multi-million dollar contracts. This means that today, teams can rely on top young talent at bargain prices, giving draft picks even more value.

During the 2021 Draft, eight trades occurred in the first round alone. The majority of these were pick-for-pick trades, with teams like the Philadelphia Eagles trading multiple lower picks to move ahead in the draft order so that they could select a player they assumed would be off the table if they waited -- in the Eagles' case, 2020 Heisman-winning wide receiver DeVonta Smith.

But other teams were eyeing players outside of the draft eligible pool -- like the Los Angeles Rams who scooped up cornerback Jalen Ramsey during the first day of the 2021 Draft, trading away a first and fourth round pick in that draft along with the rights to their first round pick in 2020, K'Lavon Chaisson. Ramsey went on to win a Super Bowl with the Rams this past season.

Some of the most notable draft day trades in recent history include the Chiefs trading up for the 10th overall pick in 2017 to select future MVP and Super Bowl champion quarterback Patrick Mahomes, as well as the Ravens trading up for the final selection of the first round in 2019 to snag their franchise quarterback Lamar Jackson.

Perhaps the most memorable draft day trade of all time took place in the 1985 Draft, when the defending Super Bowl champion 49ers took a risk and traded up for the number 16 pick to select wide receiver Jerry Rice. Rice went on to become perhaps the greatest to ever play the position at the NFL level.

Who is eligible to be drafted?

According to the NFL, "players must have been out of high school for at least three years and must have used up their college eligibility before the start of the next college football season" in order to become eligible for the draft.

So, essentially, any college senior who has played four seasons of NCAA football would be a draftable option.

However, underclassmen and seniors who have not used all of their college football eligibility can also request special permission from the NFL to declare for the draft. In this case, such players are required to submit their requests to the NFL within seven days of the NCAA National Championship.

These exceptions can account for over 100 athletes in the draft eligible pool, but many applications are denied. Once a player declares for the NFL Draft, they forfeit the rest of his NCAA eligibility, so the NFL is careful to grant "special eligibility" to only those with true draft day potential.

The NFL relies on its College Advisory Committee -- made up of "high-level personnel evaluators from NFL clubs and directors from the league's two sanctioned scouting organizations" -- to make these calls.

Since 2014, the College Advisory Committee has used a ranking system to decide whether a player requesting special eligibility has potential to be drafted within the first two rounds; if not, it is usually recommended that they stay in school.

NFL Player Personnel staff is responsible for confirming all player eligibility ahead of the draft, and again on draft day, checking that each player selected is in fact eligible.

How do teams know who to draft?

There are no guarantees that even the most highly touted prospects will pan out to become NFL stars, but teams rely heavily on their NCAA scouts to make the best selections possible in order to fill any gaps in their lineups.

In addition to the scouting reports they receive, teams also have a handful of opportunities to watch top prospects gather at NFL sponsored events, like the East-West Shrine Bowl and the Senior Bowl: two All-Star style games that pit top prospects against each other. The most notable of these events, however, is the National Invitational Camp, or the NFL Scouting Combine.

The invite-only combine was introduced in 1982 and takes place every February, giving teams access to all of the top prospects at one time in one location. This gives teams the opportunity to test prospects on a more in-depth "variety of medical, mental and physical criteria."

Before the Combine was introduced, teams like the New York Jets would fly prospects they were interested in out to their team headquarters in order to conduct their own evaluations. So not only were teams dropping a pretty penny on bringing potential players to them, but the biggest prospects were also being dragged across the country.

A centralized, one-week event streamlines this, and with modern media, it also brings fans into the fold for a closer look at around 300 of the top prospects.

For the teams, this is an opportunity to judge the accuracy of the information they have already collected on their prospects.

According to Jeff Foster, president of the National Football Scouting Inc. (NFS) and head of the NFL Combine, "Most evaluators agree that the National Combine is to validate what they've seen on film."

Combine participants are put through a series of grueling drills -- including bench press, vertical jump, and the infamous 40-yard dash -- to test their physical aptitude. Additionally, they undergo hours of medical and psychological testing.

The NFS relies on its healthcare partners at Indiana University Health to review each prospect's medical history and perform additional medical evaluations. Each team is also allotted up to 60 15-minute interviews, a unique opportunity to evaluate if a prospect has the mental fortitude to survive an NFL season.

Between their scouts and the NFL Combine, teams collect a significant amount of intel on draft prospects, so that when it comes time for draft weekend, they have all of the information available in order to make the strongest decisions possible.

From declaring for the draft through the Combine, the NFL Draft is the culmination of many players' lifelong journeys to professional football; but it is also just the first page in what could be future Hall of Fame careers.