Next stress for many parents: First school lunch bills since 2020 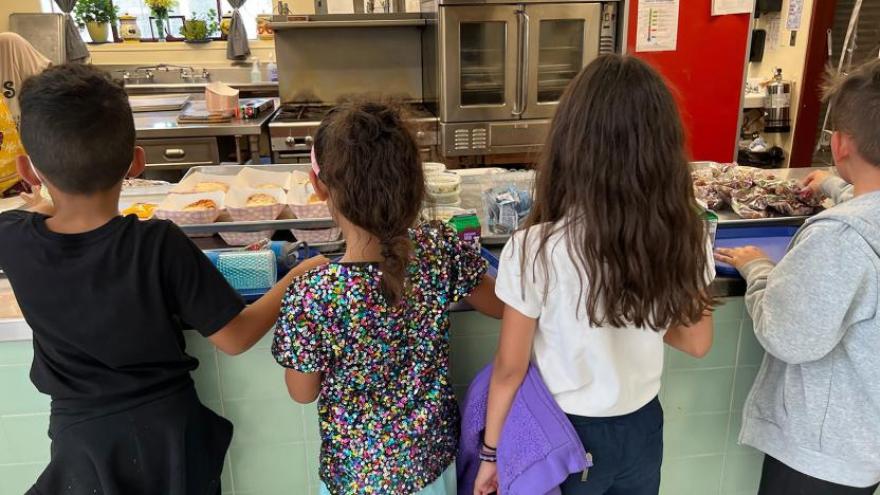 Hundreds of Tucson Unified School District students could lose access to free or reduced-price meals at school in mid-September if their parents don't submit new applications for the program.

(CNN) -- Though East Hampton is a solidly middle-class town in Connecticut, dozens of families are applying for free school meals for the first time as they contend with high food costs and tight budgets.

Like their peers in most of the US, East Hampton children soon will no longer automatically receive breakfast and lunch at school without charge as they have for the past two years. That's because Congress in June did not extend the Covid-19 pandemic waivers that had expanded free school meals to all students, regardless of income.

Most of these East Hampton parents, however, will have to pack food for their kids or spend hundreds of dollars in the cafeteria this school year once a short, state-funded extension of the expanded program expires. Nearly all of the new applicants don't qualify for the regular federal program because their incomes are too high, said Jen Bove, director of food and nutrition services for the district, which has 1,900 students.

"If they are applying, they need it," said Bove, noting that the program doesn't take into account debts that families may have accrued if they temporarily lost their jobs during the pandemic. "At a time when free meals have never been needed more in my adulthood, we're taking it away from them."

Turning away struggling families is only one of the issues that school nutrition directors are facing this year. They are also trying to make sure that those who do qualify for free or reduced-price meals submit applications, which parents haven't had to do since the 2019-20 school year thanks to the federal waivers. School officials fear that some parents may not know they have to fill out new paperwork, while others may find it difficult to complete the forms.

Compounding the problem is that some school districts have had to raise their rates for breakfast and lunch this year because they are being hit with skyrocketing food prices, supply chain shortages and higher labor costs.

"Now that kids are returning to school and free meals are not going to be available, it's going to put a tremendous amount of financial pressure on families who are already being squeezed," said Crystal FitzSimons, director of school programs at the Food Research & Action Center. "You're going to have kids showing up in class hungry."

Some federal waivers continue, others don't

When the Covid-19 pandemic hit the US in March 2020, Congress approved a slew of waivers that gave districts more flexibility to continue serving meals when schools were closed and children were learning remotely. In addition to being able to provide meals for students to take home, schools received higher federal reimbursement rates and more leeway in what food they could serve amid supply chain disruptions.

The waivers continued even as schools reopened over the past two years, allowing them to offer grab-and-go meals to kids who were quarantining or studying virtually or to serve meals in classrooms instead of the cafeteria.

Around 30 million students were receiving free meals at school, according to the US Department of Agriculture, up from about 20 million children who qualified based on their household income prior to the pandemic.

Everyone being able to eat in the cafeteria at no charge also minimized the stigma felt by some kids who received free school meals, increasing the likelihood that they would actually get breakfast and lunch, school nutrition officials said.

However, Congress only extended some of the flexibilities for the 2022-23 academic year. The USDA is continuing to waive penalties for schools that can't always meet federal nutrition requirements because they can't order or aren't receiving the food that meets the guidelines.

Districts are also receiving extra funds to compensate for higher food and labor costs, though not as much as they had been reimbursed since the pandemic began.

But one of the biggest changes is that low-income families have to once again apply for free or reduced-price meals. While many are automatically certified if they receive food stamps, and in some states, Medicaid, others must still fill out forms to qualify.

A family of three must have an annual gross income of less than roughly $30,000 to be eligible for free meals and about $42,600 for reduced-price meals during this school year.

School districts are trying to get the word out to parents to apply. Most have put the applications on their online portals, while many also have printed forms that they send home or that parents can pick up.

Families who qualified in recent years have the first 30 operating days of the school year to renew their eligibility. If they don't, their children will no longer be able to receive meals for free or at a reduced price.

At Tucson Unified School District in Arizona, just over 9,000 students have submitted applications that qualify for free or reduced-price meals so far this year, said Lindsay Aguilar, director of the district's food services department. But more than 1,000 children who had qualified previously will see their eligibility expire on September 16 if they don't reapply. (Nearly two-thirds of schools in Tucson regularly serve free meals to all students because of the schools' high poverty rates.)

In general, districts nationwide are seeing more applications than prior to the pandemic, said Adkins, who is also the child nutrition consultant for Oakland Schools Intermediate School District in Michigan. But it's too soon to say how many eligible families may fall through the cracks.

"Every household has competing priorities for their finances, so we just don't want school meals to be unavailable or unattainable," she said.

The waivers' expiration comes at a time when high inflation is putting a strain on family budgets. Grocery prices soared 13.1% over the 12 months through July, which was the largest annual increase since the year ending in March 1979, according to the most recent data from the Bureau of Labor Statistics.

For Dawn Overmyer, spending $80 a month on school lunch for her 5-year-old grandson could force her to be late on other bills. Overmyer and her husband, who both work at a supermarket distribution warehouse, have custody of the boy and his younger brother, who "love to eat," she said.

The Montpelier, Indiana, couple were very disappointed to learn that they made $2,000 a year too much to qualify for their grandson to get free or reduced-price meals at school. They already live paycheck to paycheck, and Overmyer has had to tap into her 401(k) retirement account to make ends meet.

"Me and my husband, we were building for our future," said Overmyer, 54. "Eighty dollars a month means quite a bit of money when it comes to trying to get my finances situated to buy a house so that I don't have to worry about rent payments when I retire."

Breakfast and lunch are still free for the kindergartener and other students for the time being, but the school told Overmyer that it will notify her when she has to start paying. She plans to prepare breakfast for her grandson, but sending him to school with lunch could wind up costing even more money each week since grocery prices have soared.

If kids are not in the free breakfast and lunch program, don't bring food from home and don't have funds in their school meal account, they are still able to eat in the cafeteria, Adkins said. But they are charged, and families must settle the balance later.

About 75% of districts had unpaid meal debt at the end of the 2017-18 school year, according to the latest information available from the School Nutrition Association. The median amount was $3,400, up from $2,000 three years earlier.

Some states are using their own funds to continue making free meals available in schools, FitzSimons said. In California and Maine, students will be able to get breakfast and lunch at no charge on an ongoing basis, while other states, including Massachusetts, Nevada and Vermont, are making them free for this school year.

Connecticut provided $30 million to extend the free program. How long it lasts in East Hampton depends on how many students participate in school meals this year, but Bove expects the money to run out around December.

Some school districts have had to raise their meal prices because of higher costs for food, supplies and labor.

In East Hampton, the price of lunch will increase by 50 cents, so students will pay between $3.50 and $4 for hot meals depending on their grade. Breakfast will also be more expensive.

Only six of the 28 school districts in Oakland County raised their prices, Adkins said, with an average increase of 15 to 25 cents.

Even if the federal reimbursements continued at the same elevated level as last year, Tucson would have had to raise its meal prices, Aguilar said. Its costs have more than doubled for some items.

A 6-ounce container used daily for side vegetables costs 135% more than the last school year, while salad containers are up 116%. The price of sliced cheddar cheese increased by 57% and whole grain hamburger buns by 50%. Chicken fajitas are 105% more expensive.

Plus, the district is now paying a minimum wage of $15 an hour, up from $13.50 an hour. That has helped reduce the share of vacant positions among the school nutrition staff from 25% last year to a more normal 15%, Aguilar said.

While Aguilar has received some inquiries from parents about the higher charges, she still considers school meals a good deal overall.

"If you think about a lunch meal or breakfast meal, I think our prices are certainly still very reasonable compared to what families are seeing at restaurants or fast-food outlets," she said. "But you know that quarter or 20 cents definitely can add up."