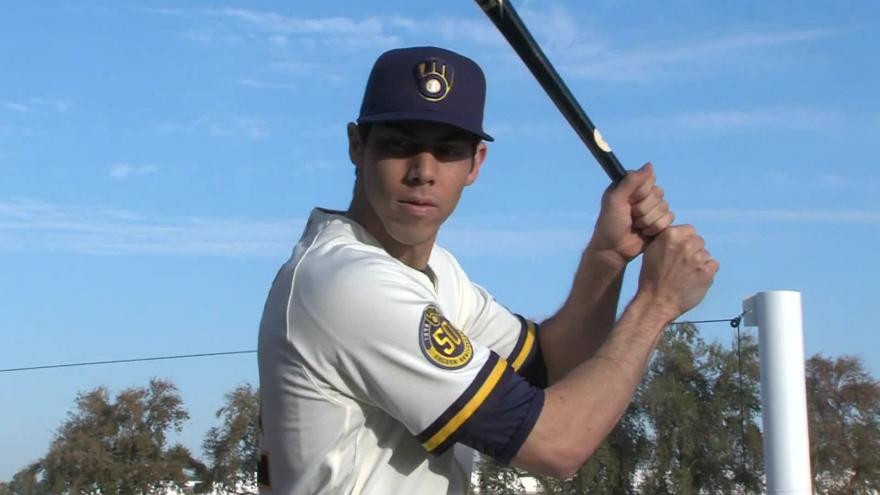 PHOENIX (AP) — Christian Yelich is staying quiet when it comes to his contract situation with the Milwaukee Brewers.

While Yelich is brushing off questions about his new deal, his teammates are all-too-happy to sing his praises.

The 28-year-old is reportedly on the brink of a multiyear contract that could keep him in Milwaukee for the rest of his career. The team said the 2018 NL MVP wouldn’t answer questions about the negotiations on Wednesday.

The organization also declined comment, but has scheduled a press conference for Friday at 11 AM.

Yelich is guaranteed $27.75 million in the remainder of his current deal: $12.5 million this year, $14 million in 2021 and a $1.25 million buyout of a 2022 team option for $16 million. The Athletic reported his new deal would add seven years and increase the total value to approximately $215 million.

“He definitely deserves it,” Brewers center fielder Lorenzo Cain said. “The guy’s definitely the best player on our team. He rakes. Like I said, he got a deserving contract for sure.”

Milwaukee obtained Yelich and Cain on the same January day in 2018. Yelich was acquired in a trade with Miami, and Cain agreed to an $80 million, five-year contract as a free agent.

The silky smooth Yelich turned into one of the game’s most feared sluggers in Milwaukee. He led the NL with a .326 batting average, .598 slugging percentage and 1.000 OPS while helping the Brewers make it to the NL Championship Series in his first year with the team. He hit 44 homers and won another NL batting title with a career-high .329 average last season.

“Christian in his first two years here, you know he has done incredible things,” manager Craig Counsell said, “and I think he’s taken this challenge, and took a trade that was probably to a place that he wasn’t sure about at the outset of it and made the best of it and found a place that he really likes to play.”

Yelich was building a case for a second straight MVP award before he broke his right kneecap on Sept. 10, sidelining the outfielder for the rest of the year. He finished second to Los Angeles’ Cody Bellinger in the MVP balloting, and the Brewers were eliminated by Washington in the wild-card game.

“Since I’ve been here and Yeli’s been here, I mean he’s been the best player I’ve ever seen,” All-Star reliever Josh Hader said. “The way he goes about his business, he does everything the right way and it’s just fun to be around him. For him to be here, life-long Brewer, that’s exciting news.”

The new contract for Yelich comes after the Brewers shed nearly $30 million from their payroll after they reached a team-record $132.6 million last year. Catcher Yasmani Grandal signed with the Chicago White Sox in free agency, and infielder Mike Moustakas left for the Cincinnati Reds.

Suter said he stood up, gave some fist bumps and jumped around a little bit when he saw the news.

“He’s the face of our franchise. He’s our guy,” he said. “So to see him locked in for nine years is incredible. Very happy day.”