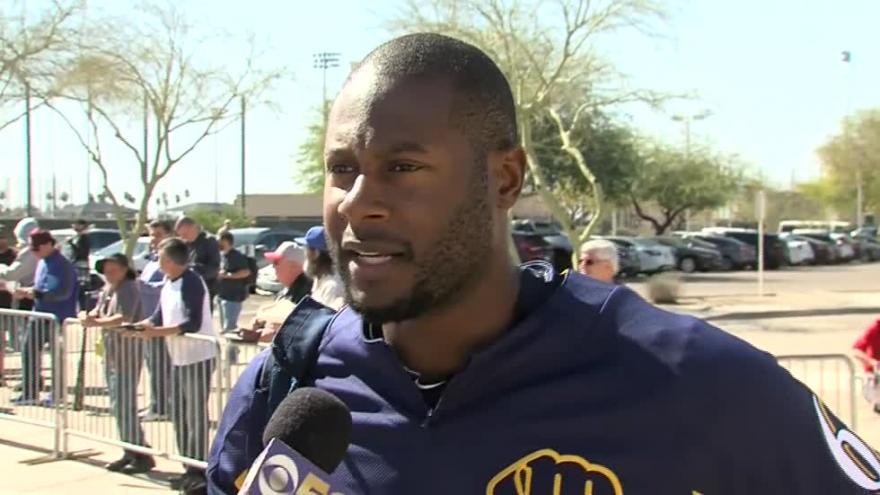 It was late in the 2015 season when Baltimore's Manny Machado smoked a pitch from Tampa Bay's Chris Archer into center field at Camden Yards.

Kevin Kiermaier sprinted to the wall, turned and leaped high above it before reaching back and snatching the ball . He banged off the wall and landed on his feet with the ball firmly planted in his glove for the out.

The play sent a dejected Machado back to the dugout and left a stunned Archer simply mouthing, "Wow."

Archer, now with Pittsburgh, was so grateful for Kiermaier's extraordinary effort that he searched for a fitting way to thank his center fielder for keeping that run off the board.

He found it by commissioning a painting of the catch, which he presented to Kiermaier at spring training the next year.

"It happens so rarely you're in awe," Archer said. "It's an awesome feeling. They have the defensive runs saved calculation, but when you actually see a run taken away it feels so good."

Kiermaier recalled the team meeting where he received the painting and shared where he has it displayed.

"It's hanging up on my wall right now and I look at it all the time," he said. "It's such a great gesture, and he did that all on his own."

Everyone has seen an outfielder receive a tip of the cap or a jubilant fist bump from a pitcher after a home run robbery.

This is a story about what happens after they leave the field. It's a look at home run robbers, the pitchers who love them and the swag these elite defenders collect after making highlight-reel grabs.

The artwork isn't the only surprise Kiermaier, a two-time Gold Glove winner, has received for amazing grabs. He's been gifted with whiskey, a case of beer and even his favorite sweets after helping out a pitcher with his defense.

"You see like quarterbacks, they're taking their linemen out because their linemen are the guys that are protecting them," Kiermaier said. "Baseball has its ways of doing that as well."

Speedy Texas Rangers center fielder Delino DeShields has robbed a few homers in his five seasons in the majors. One of the most memorable came when he climbed the center field wall at Globe Life Park to deny San Diego's Hunter Renfroe a two-run shot last season. The robbery helped Mike Minor pitch seven scoreless innings in a 5-2 win.

Minor, who could be seen saying, "Oh my God" after the catch, decided DeShields deserved a treat for helping him keep a zero on the board.

His loot? An electric scooter. Ostensibly to help save DeShields' legs for more such catches.

While Kiermaier and DeShields are the leaders in the clubhouse for home run robbery rewards, plenty of other outfielders have received gifts for their thievery.

Seattle's Keon Broxton has a knack for making such plays, often late in games. The rangy center fielder has three home run robberies in the ninth inning or later in his career, with two of those coming with Corey Knebel pitching when Broxton was with the Brewers.

There was one on and two out in the ninth inning of a 2017 game with Milwaukee up 6-5 over the Cardinals when Broxton reached over the wall in front of a 400-foot sign to rob Randal Grichuk of what would have been a go-ahead blast and give the Brewers the win.

The second one he robbed for Knebel came on July 4, 2018. He leaped, stretched his entire body against the wall and reached at least a foot over it to corral a soaring shot by Minnesota's Brian Dozier in the ninth inning of a 3-2 win.

To Broxton, there's no better feeling than robbing a home run and he delights in the pitcher's reaction afterward.

"When your pitcher is super excited about it and happy that you did that for him, I take pride in that just for that simple fact," he said.

Of course, he appreciates the spoils that have come with those grabs, too.

That Fourth of July catch netted Broxton a gift card to Nordstrom and Knebel has also gotten him a couple of other gift cards and treated him to dinner for his dazzling defense.

Houston starter Gerrit Cole has played with more than his fair share of home run robbers. He has an outfield with Jake Marisnick, George Springer and Josh Reddick with the Astros and played with Starling Marte and Andrew McCutchen in Pittsburgh.

He'll always be grateful to Marte for keeping brother-in-law Brandon Crawford from going yard off him with a nifty robbery he made by reaching into the stands in left field in 2015.

Despite being helped by such catches on several occasions, Cole sheepishly noted that he's never given a present for a robbery.

"But now that you mention something, it looks like I need to go to the store," he said, smiling.

Brewers' center fielder Lorenzo Cain recalled a robbery he committed in April against the Mets at Citi Field. Slugger Todd Frazier sent a ball from Chase Anderson to straightaway center field for what looked like a sure home run. Instead, Cain tracked it, jumped and reached high above the wall to make the catch . Cain smiled broadly as he came down with it before shaking his finger as if to say, "Not on my watch."

"He gave me a gift card to a restaurant in Milwaukee," Cain said. "I've gotten a few treats. I told him he doesn't have to do that, I was just trying to make a play. But it's always nice when a pitcher understands that it's not easy out there making a play for him."

These are the kinds of plays that give Cain a boost and help him feel like he's contributing during times when things aren't going so well at the plate.

"It's something very unique that everybody can't do," he said. "I think it takes a special talent to do it."

While Archer set the bar with personalized artwork for Kiermaier and Minor sent DeShields zipping around on a scooter, not all the home run robbery booty is quite so fancy.

When Cleveland's Greg Allen snagged a ball hit by Houston's Alex Bregman just before it would have sailed into the seats in right field at Minute Maid Park last season, Mike Clevinger rewarded him by paying for a few beers after the game.

And years ago when Reddick played for Oakland, Jesse Chavez gave him a carton of cigarettes when he robbed a homer for him.

Still, those gifts are better than never getting one at all. Angels outfielder Justin Upton, who has eight home run robberies since 2015, was shocked to learn of this phenomenon.

"I didn't know that was a thing. But next time I rob a homer I'm going to let the pitcher know," Upton said with a laugh.

Arizona's Adam Jones, who's had plenty of robberies in a 14-year career with stops in Seattle and Baltimore, said he's never been rewarded for one of those catches.

Even his most famous robbery, when he took away a homer from Machado by reaching into a sea of fans to make an improbable catch in the World Baseball Classic, didn't net him any swag.

It did, however, gain him the admiration of Tyler Clippard, who threw the would-be homer pitch.

"He was like a magician," Clippard said in 2018. "It was like a magic act out there from my perspective. It just looked like it was gone and the next thing I know he had the ball in his glove."

Though he's never gotten a home run robbery gift, Jones was warmed when former Orioles reliever Darren O'Day bought him an expensive bottle of liquor for making a nifty catch in the outfield and completing a double play by throwing out Mike Trout at home.

Jones shouldn't feel too bad about never getting a home run robbery reward.

Hall of Fame center fielder Ken Griffey Jr., perhaps the best and most prolific home run robber of all time, said he was in the same boat.

"Nothing," Griffey said when asked what gifts he received for robbing homers in his illustrious career.