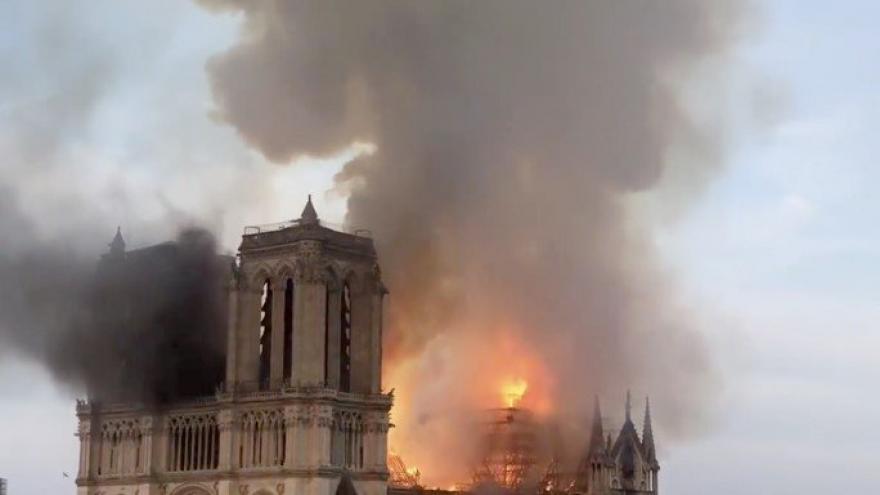 PARIS (AP) — The Latest on the fire that swept through Paris' Notre Dame cathedral (all times local):

New York Governor Andrew M. Cuomo has directed that One World Trade Center's spire be lighted in the colors of the French flag in solidarity with the people of France and the Catholic community worldwide.

Cuomo says the lighting on Tuesday night will be a tribute to the fire-ravaged Notre Dame cathedral, "one of the world's most sacred and celebrated religious monuments."

The flags of France and the United States contain the same colors, but different patterns.

The French flag has a white center flanked with blue and red. The U.S. flag has red and white stripes, with white stars on a blue background in the upper left corner.

The White House says the bells of Notre Dame cathedral "will sound again."

Press secretary Sarah Sanders says President Donald Trump offered his condolences Tuesday to French President Emmanuel Macron over the fire that caused major damage to the iconic building. She says America stands with the French, the city of Paris and millions of visitors from around the world who seeks solace at the cathedral.

Sanders adds that France is America's oldest ally and that Americans remember "with grateful hearts" the tolling of Notre Dame's bells the day after the Sept. 11, 2001, attacks on the U.S.

She says "those bells will sound again" and closes her statement with "Vive la France!"

The extent of any damage to the bells and their support structure is unclear.

Spain's Culture Ministry says it has convened an extraordinary meeting of the country's Council of Historic Patrimony to discuss fire safety and other measures after a blaze ravaged Notre Dame Cathedral in Paris.

Culture Minister Jose Guirao tells Radio Nacional de Espana on Tuesday that the fire was "an alarm call" that is prompting authorities to review safety procedures and security installations.

He said Spanish cathedrals are well-protected "but there's no such thing as 100% safe."

The Culture Ministry says in a statement that the Council of Historic Patrimony was due to review safety procedures at a meeting earlier this month but ran out of time. A new meeting focusing solely on fire safety and other protection measures will be held in Madrid on April 26.

A Paris judicial official says investigators have questioned about 30 people after the fire at Notre Dame Cathedral.

He said most of them were employees working on the renovation of the monument.

The first time, some people, including a fire official permanently working on the site, went to check under the roof and saw nothing. The second time it was already too late because the fire was too strong, the official said.

He added that 40 to 50 investigators are working on the case but are not allowed to enter the monument yet for safety reasons.