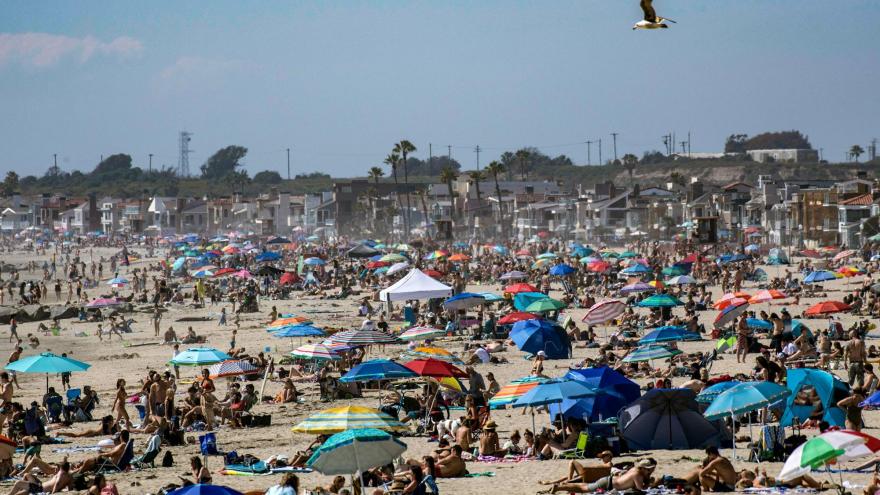 Large crowds gather near the Newport Beach Pier in Newport Beach on Saturday, April 25, 2020 to cool off during the hot weather despite the coronavirus pandemic.

(CNN) -- The Southern California city of Newport Beach voted in a Tuesday City Council meeting to keep its beaches open. But additional reinforcements will enforce social distancing to protect against the coronavirus pandemic.

An ordinance was proposed to close the city's beaches for the next three weekends to avoid the overcrowding seen this past weekend, but council members did not end up voting directly on the agenda items during the meeting. Instead, Councilman Kevin Muldoon made an alternate motion to deny the item, which passed on a 5-2 vote, according to the city's public information manager.

The majority of the city's council members expressed a strong desire to keep most public beaches, parks and open spaces accessible for the mental health and physical wellbeing of residents, according to a statement.

The vote comes as many states prepare to begin loosening restrictions and phase out of stay-at-home orders. California has begun allowing scheduled surgeries, but does not have an end date for its orders.

Mayor Will O'Neill gave an overview during the meeting about the city's beaches, which saw about 90,000 beachgoers from Friday to Sunday. Both Orange County, where Newport Beach is located, and Ventura County beaches were packed that weekend while beaches in Los Angeles County and San Diego County remain closed.

O'Neill mentioned that California Gov. Gavin Newsom did not discuss or suggest the closure of any beaches and said that he agrees with the governor that enforcement needs to be stepped up dramatically. But he also said he trusts the majority of people to do the right thing.

Those who don't ought to be acquainted with the Newport Beach Police Department, O'Neill added.

In a press conference on Monday, Governor Newsom chastised beachgoers and said he was disappointed. He also warned that defying the stay-at-home order could delay the reopening of the state.

Authorities in both Ventura and Orange Counties reported excellent behavior by beachgoers, who they said were observing social distancing rules after weeks being hunkered down to slow the spread of the virus.

Still, Newsom said in a time when social distancing is so important, the images of the crowds don't look good.

"Those images are an example of what not to see, people, what not to do if we're going to make the meaningful progress that we've made in the last few weeks extend into the next number of weeks," Newsom said during a news conference Monday.