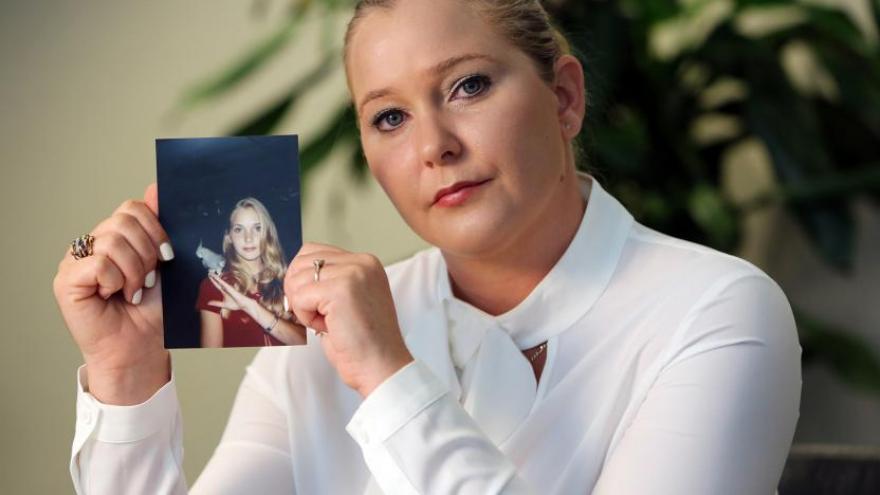 Virginia Giuffre holds a photo of herself at age 16, when she says Palm Beach multimillionaire Jeffrey Epstein began abusing her sexually.

(CNN) -- Virginia Giuffre, an alleged victim of Jeffrey Epstein, describes the psychological toll of Epstein's abuse in portions of a newly released deposition from May 3, 2016.

Giuffre has previously described being recruited by Ghislaine Maxwell, Epstein's onetime girlfriend who has been described as a "recruiter" for Epstein's purported sex trafficking ring, as a teenager, and has alleged she was instructed by Maxwell to have sex with numerous men including Prince Andrew.

In her deposition, Giuffre is pressed by attorneys to provide additional names of men who Maxwell "directed her" to have sex with. The attorney conducting the interview names several, including Prince Andrew, former New Mexico Gov. Bill Richardson, and an individual described as "another prince," and another individual described as "the large hotel chain owner."

"Look, I've given you what I know right now," Giuffre said in response. "I'm sorry. This is very hard for me and very frustrating to have to go over this. I don't -- I don't recall all of the people. There was a large amount of people that I was sent to."

In the court filings, Maxwell and her attorney portray Giuffre as an unreliable narrator, pointing to errors in certain dates and figures she provided.

Giuffre acknowledges in the deposition she was paid for the photo of herself with Prince Andrew that has been published in numerous media outlets.

Giuffre's claims have been previously reported by CNN.

Prince Andrew and Richardson have denied the allegations against them.

Giuffre also claims in her deposition that she rode in a helicopter that Maxwell piloted to Epstein's private island in the Caribbean "plenty of times."

Discussing her interviews with reporter Sharon Churcher in 2011, Giuffre says she told Churcher that Maxwell had claimed she flew former President Bill Clinton into the island owned by Epstein as well.

"Ghislaine told me that she flew Bill Clinton in. And Ghislaine likes to talk a lot of stuff that sounds fantastical. And whether it's true or not, that is what I do recall telling Sharon Churcher."

Giuffre acknowledges in her deposition that in some ways she felt Churcher got the story wrong but she never tried to correct her.

Giuffre described wondering why former President Clinton was on the island while she was there and discussing it with Epstein.

"I remember asking Jeffrey what's Bill Clinton doing here kind of thing, and he laughed it off and said well he owes me a favor," Giuffre told attorneys in a 2011 recorded conversation about her claims against Epstein.

"He never told me what favors they were. I never knew. I didn't know if he was serious. It was just a joke."

Giuffre went on to say that Epstein told her "everyone owes him favors. They're all in each other's pockets."

Giuffre said that Maxwell and other "girls" were on the island at the time as well.

Giuffre has previously said publicly that she saw Clinton on the island.

Clinton has denied ever going to Epstein's island in the Caribbean.

In her deposition Giuffre described being "sent by" Maxwell to have sex with various men under the guise of "massage."

The newly released documents also show email correspondence between Maxwell and an email address that appears to be Epstein from 2015, wherein Epstein complains about the negative attention he had received since he was charged with soliciting a prostitute in 2007.

The documents are part of an unsealing stemming from a 2015 defamation lawsuit against Maxwell brought by Giuffre.