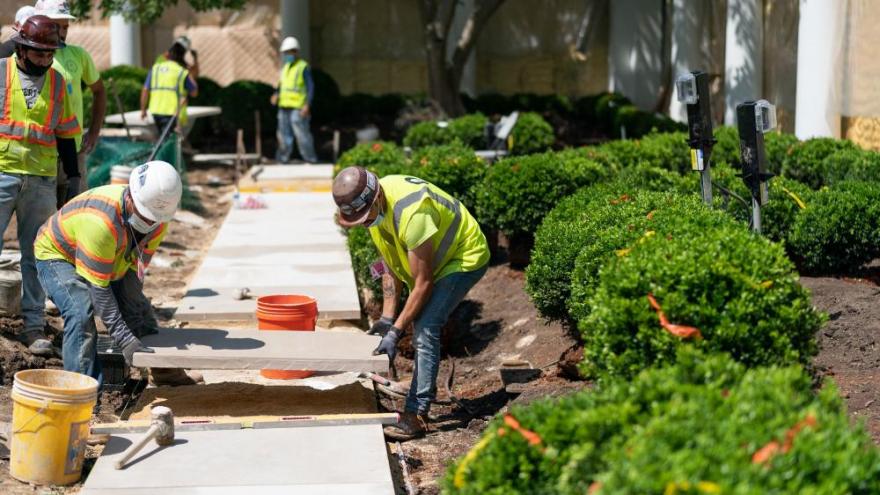 The newly renovated White House Rose Garden is under repair less than three weeks after it's official unveiling.

(CNN) -- The newly renovated White House Rose Garden is under repair less than three weeks after its official unveiling. The garden is experiencing "issues with water drainage" and "some minor complications with updated construction," a source with knowledge of the garden troubles told CNN. New sod is also being laid down.

First lady Melania Trump on August 22 hosted a private party to celebrate the redone Rose Garden, which the public was told had been completed after approximately three weeks of renovation.

A White House spokesman said Tuesday that taxpayers will not have to pay for the cost of re-sodding the Rose Garden.

"The sod is being replaced at no cost to taxpayers," deputy press secretary Judd Deere told CNN.

Instead, the tab for the repairs to the grass will be paid for by the Trump campaign, a campaign official told CNN. The cost of the re-sod of the Rose Garden was not revealed. The campaign is also paying for repairs and replacement sod for the South Lawn, which was also damaged by events for the Republican National Convention.

Hundreds of guests were seated on the South Lawn during the convention, and a large tent was also erected. Additionally, a stage and lighting apparatus were built specifically for President Donald Trump to use the White House as the backdrop for his convention speech.

The Rose Garden renovation was paid for by private funds, solicited in large part by the Trust for the National Mall.

The White House has not said when the Rose Garden will be able to properly function.

Trump on Monday held a news conference on the North Portico, an unusual outdoor location, but the source notes hosting press in seats at the Rose Garden "would not be doable" in the iconic garden's current status. Trump has also had to motorcade to Andrews Air Force Base of late, again preventing media from seeing the construction in the Rose Garden in recent days.

Melania Trump held her Republican National Convention speech from the Rose Garden in front of approximately 75 seated guests on August 25. For that event, the grass of the Rose Garden was too muddy to host an audience due to lack of drainage from heavy rain storms, thus a "turf" lawn was put down over the grass instead, a source with knowledge told CNN at the time.

Trump announced she was spearheading the Rose Garden overhaul in late July. The renovation included updates to plants, trees, grass and florals, as well as the addition of a new limestone border, pathways and technological elements to make the outdoor space more modernized for televised events.

The first lady's renovation followed the guidelines from the garden's original 1962 layout -- but the update was largely panned by critics for looking substantially altered. Most discussed was the removal of 10 crabapple trees. The trees, which over the years had been replaced and were not the Kennedy-era originals, were transported to a National Park Service facility for care. According to a White House official, they will be replanted elsewhere on the grounds in the near future.

The trees were causing too much shade to provide for healthy and regular growth of the florals and shrubs beneath them, according to a 220-page report on the garden history and renovation prepared for the Committee for the Preservation of the White House.