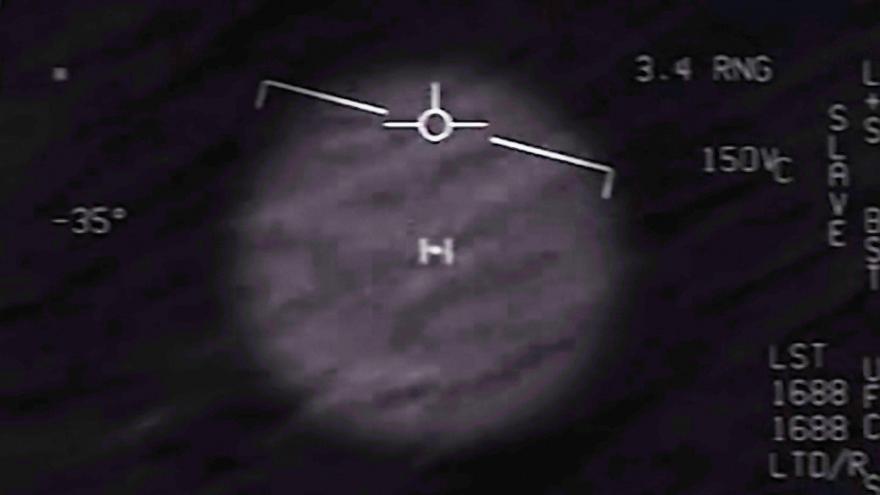 Newly released "hazard reports" detailing encounters between US Navy aircraft and "unidentified aerial phenomena," reveal new details about incidents which were thrust into the spotlight when the Pentagon officially declassified and released videos of three encounters late last month.

(CNN) -- Newly released "hazard reports" detailing encounters between US Navy aircraft and "unidentified aerial phenomena" reveal details about incidents that were thrust into the spotlight when the Pentagon officially declassified and released videos of three encounters late last month.

"The unknown aircraft appeared to be small in size, approximately the size of a suitcase, and silver in color," one report describing an incident from March 26, 2014, said.

During that encounter one of the Navy F/A-18 jets "passed within 1000' of the object, but was unable to positively determine the identity of the aircraft," the report added, saying the US Navy pilot "attempted to regain visual contact with the aircraft, but was unable."

CNN on Wednesday obtained the Navy Safety Center documents, which were previously labeled "For Official Use Only." They follow the Pentagon's official release late last month of three short videos showing "unidentified aerial phenomena" that had previously been made public by a private company.

The reports were first published by the Drive, a website covering auto news and military issues, which obtained the documents through a Freedom of Information Act request.

The videos show what appear to be unidentified flying objects rapidly moving while recorded by infrared cameras. Two of the videos contain Naval aviators reacting in awe at how quickly the objects are moving. One voice speculates that it could be a drone.

Objects could be drones

The newly released reports appear to share this assessment, describing many of the unidentified aircraft as "Unmanned Aerial Systems (UAS)," the Pentagon's official name for drone aircraft.

According to another incident report from November 2013 a Navy F/A-18 pilot "was able to visually acquire a small aircraft. The aircraft had an approximately 5 foot wingspan and was colored white with no other distinguishable features."

"Due to the small size, the aircraft was determined to be a UAS," the report said.

Another incident from June 27, 2013, said the encountered "aircraft was white in color and approximately the size and shape of a drone or missile," according to the report.

But the reports say that even when the unidentified flying objects are assessed to be drones the military was unable to identify who was operating the drone, presenting a major safety and security challenge to the Navy jets training in the area which are restricted military training airspace ranges off the east coast of Virginia.

"I feel it may only be a matter of time before one of our F/A-18 aircraft has a mid-air collision with an unidentified UAS," one of the authors of a report warned.

There is also the possibility that the drones could be operated by an adversary such as Russia or China who may have been seeking to collect information about the US military's operations.

The Navy now has formal guidelines for how its pilots can report when they believe they have seen possible UFOs.

The videos of the encounters were first released between December 2017 and March 2018 by To The Stars Academy of Arts & Sciences, a company co-founded by former Blink-182 musician Tom DeLonge that says it studies information about unidentified aerial phenomena.

The truth is out there

The Pentagon has previously studied recordings of aerial encounters with unknown objects as part of a since-shuttered classified program that was launched at the behest of former Sen. Harry Reid of Nevada. The program was launched in 2007 and ended in 2012, according to the Pentagon, because they assessed that there were higher priorities that needed funding.

Nevertheless, Luis Elizondo, the former head of the classified program, told CNN in 2017 that he personally believes "there is very compelling evidence that we may not be alone."

President Donald Trump called the recently officially released Pentagon footage a "hell of a video" and told Reuters he wonders "if it's real."