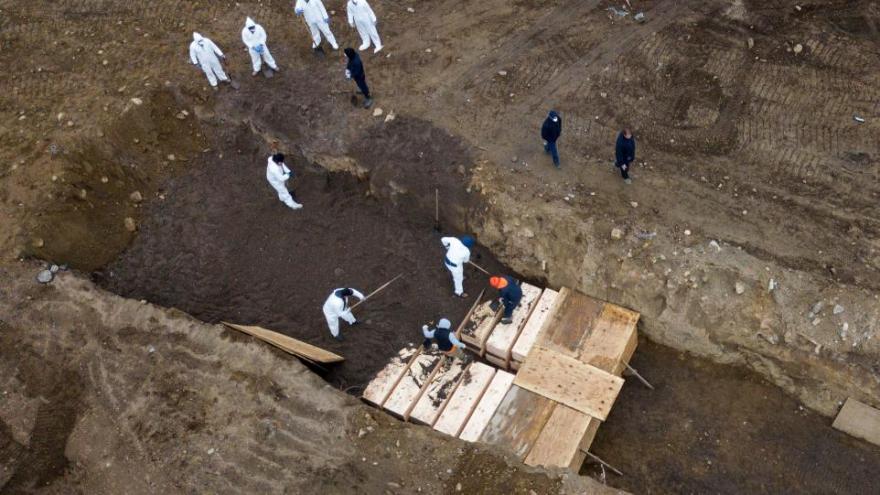 (CNN) -- New York City officials say that Hart Island, which for decades has been used as the final resting place for people who died unclaimed, will also be used for unclaimed coronavirus victims.

Mayor Bill de Blasio responded Friday to concerns that mass burials would be necessary because of the high number of bodies caused by the pandemic. Drone photos appeared to show groups of caskets being covered with dirt in long trenches on Hart Island.

"There will be no mass burials on Hart Island," he tweeted. "Everything will be individual and every body will be treated with dignity."

The mayor said in the tweet, "The heartbreaking numbers of deaths we're seeing means we are sadly losing more people without family or friends to bury them privately. Those are the people who will be buried on Hart Island, with every measure of respect and dignity New York City can provide."

"This is not a new procedure," the mayor said at a news conference, adding it's a "sad topic."

Press secretary Freddi Goldstein told CNN on Thursday, "It is likely that people who have passed away from (coronavirus) ... will be buried on the island in the coming days."

Hart Island has been used by the city as a public cemetery for over 150 years and is managed by the Department of Correction. The Hart island burials are mostly people who have been unclaimed at the city's morgue for anywhere from 30 to 60 days, Goldstein said.

Over 1 million people are interred there.

The city is transferring unclaimed bodies to Hart Island to make way for other coronavirus victims whose bodies will be claimed, Goldstein said. New rules from the medical examiner's office say bodies will be taken to the island if they go unclaimed for two weeks.

Only people who have not been claimed by relatives or a loved will be buried there, Goldstein highlighted. Despite the new rule from the medical examiner, Goldstein said as long as morgue officials make contact with a relative within 14 days, they will not be moved to Hart Island.

Usually, about 25 people are buried on the island each week, Goldstein said. But since coronavirus began claiming victims in the US, she said there are 25 people buried there each day.