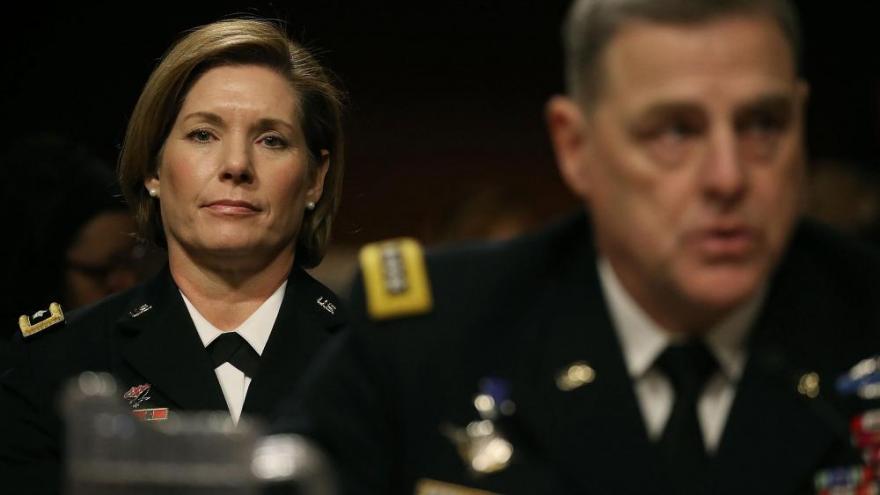 The New York Times reports promotion of two female generals were delayed by Pentagon officials until after the 2020 presidential election out of fear of "turmoil" from President Donald Trump's White House. US Army Gen. Laura Richardson (L) and US Army Chief of Staff, Mark Milley (R) at a hearing on Capitol Hill, February 2, 2016 in Washington, DC.

(CNN) -- Promotions of two female generals were delayed by Pentagon officials until after the 2020 presidential election out of fear of "turmoil" from President Donald Trump's White House, The New York Times reported Wednesday.

Chairman of the Joint Chiefs of Staff Gen. Mark Milley and then-Defense Secretary Mark Esper, according to the newspaper, worried that if they mentioned Lt. Gen. Laura J. Richardson, commanding general of US Army North (Fifth Army), and Gen. Jacqueline D. Van Ovost, commander of Air Mobility Command in the Air Force, "the Trump White House would replace them with their own candidates before leaving office." Milley and Esper also feared candidates besides White men nominated to positions normally held by White men "might run into turmoil once their nominations got to the White House," the Times reported.

The concerns by both top defense officials led them to delay the generals' nominations until after the November presidential election in hopes that the candidates would have a better chance of being considered under a Biden administration, according to the Times.

Esper confirmed the report to CNN's Jake Tapper on Wednesday. CNN has reached out to the Pentagon, White House and Trump's office for comment.

A senior official close to Esper told Tapper that the slate of officers numbered a half dozen, and that there were concerns others at the White House might try to hold them up for one reason or another -- including the fact that relations between Esper and Trump, and between the Pentagon and White House, were in bad shape.

News of the move by the officials underscores the turmoil within the Defense Department in the waning days of the 45th President's administration that included uncertainty and alarm over changes within the Pentagon.

Esper told the Times that the women were chosen because they were "the best officers for the jobs," adding, "I didn't want their promotions derailed because someone in the Trump White House saw that I recommended them or thought D.O.D. was playing politics."

"This was not the case. They were the best qualified. We were doing the right thing," Esper told the newspaper.

Former acting Defense Secretary Christopher Miller pushed back on the allegation that nominations were delayed, telling the Times that "it was about timing considerations, not that they were women."