Cuomo made unwanted advance toward woman during 2019 wedding, witness says 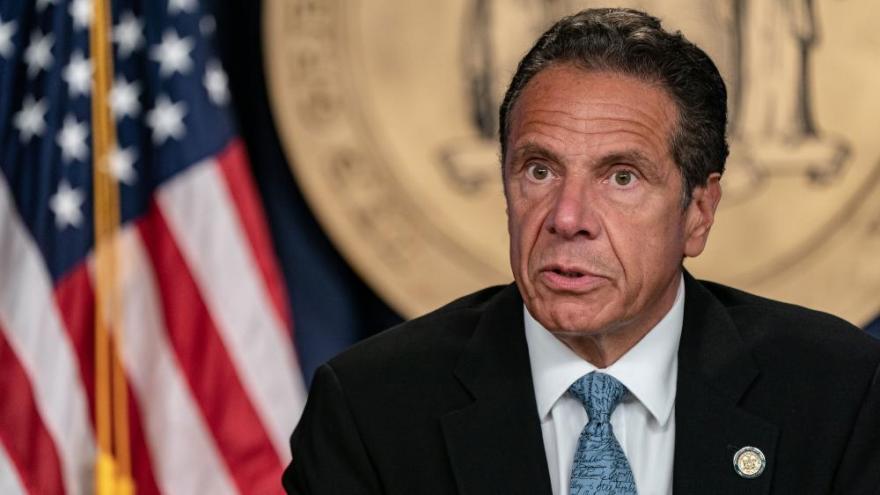 (CNN) -- Democratic New York Gov. Andrew Cuomo made an unwanted advance toward a woman at a 2019 wedding, The New York Times first reported on Monday evening and a friend of the woman who says they witnessed the incident told CNN on Tuesday.

The latest allegation adds to an escalating crisis for the governor in the wake of two sexual harassment allegations.

The woman, Anna Ruch, told the Times that Cuomo approached her during a crowded wedding reception in New York in 2019. Ruch told the newspaper she thanked Cuomo for his toast to the newlyweds, and in response, she says he put his hand on her bare lower back, which the Times said was exposed in an open-back dress.

Ruch has not responded to requests for comment from CNN.

On Tuesday, Ruch's friend verified the account to CNN, saying Ruch asked Cuomo for a photo during a crowded wedding reception in New York in 2019. CNN is not naming Ruch's friend due to concerns they expressed over their professional life.

That's when Cuomo put his hand on Ruch's lower back, which was exposed in an open-back dress, the friend recalled.

Cuomo then put both hands on Ruch's cheeks "and I heard him ask if he could kiss her," Ruch's friend said.

"I don't think she said anything, but she definitely did not say yes. And then (Cuomo) proceeded to give her a big kiss on the cheek," the friend said.

Ruch told The New York Times, "I was so confused and shocked and embarrassed."

"I turned my head away and didn't have words in that moment," Ruch told the newspaper. That account was corroborated by Ruch's friend, who provided CNN with screenshots of text messages and two photographs from the time of the incident and described Ruch as "flustered" and "confused" after her interaction with the governor.

"In the moment it just felt aggressive," Ruch's friend told CNN. "And I was the friend who was there and said, 'Are you OK?'"

The Times published a single photo of Ruch and Cuomo at the event, in which Cuomo appears to be placing his hands around Ruch's face, but it is unclear what happened in that moment.

Fresh calls for Cuomo to resign

The latest accusation set off another torrent of criticism and new calls for Cuomo to resign, this time from New York Rep. Kathleen Rice, the first Democratic US House member to demand that the governor step down.

"The time has come," Rice tweeted late Monday. "The Governor must resign."

With her statement Monday, Rice joined a small group of other Democratic state lawmakers, including state Sens. Alessandra Biaggi and Gustavo Rivera, and Assemblywoman Jessica Gonzalez-Rojas, who have said Cuomo should leave office in the wake of mounting allegations.

".@NYGovCuomo, you are a monster, and it is time for you to go. Now," Biaggi tweeted.

The New York Working Families Party, a progressive organization that has clashed with Cuomo over the years, echoed their calls on Tuesday morning.

"Andrew Cuomo's reign of fear, harassment, and intimidation cannot continue," New York Working Families Party state director Sochie Nnaemeka said in a statement. "We are calling on Governor Cuomo to resign immediately because he is unfit to serve the people of New York.

An independent investigation, which could see Cuomo compelled to testify, is poised to begin under the guidance of the state attorney general.

Ruch is the first woman to make an accusation against Cuomo who did not work for him. The other two women -- Lindsey Boylan and Charlotte Bennett -- who accused the governor of sexual harassment were both aides in the Cuomo administration.

Cuomo's office didn't respond to CNN's repeated requests for comment about Ruch's accusation to the Times. A spokesperson for Cuomo did not directly address the allegations to the newspaper but pointed to a statement the governor released Sunday evening in the face of backlash from Boylan's and Bennett's allegations of sexual harassment.

Cuomo also acknowledged that some of his previous comments "may have been insensitive or too personal" and said he was "truly sorry" to those who might have "misinterpreted (the remarks) as an unwanted flirtation."

His comments came after an accusation of sexual harassment emerged Saturday evening in a separate Times article. Bennett, a 25-year-old former executive assistant and health policy adviser to Cuomo, told the newspaper that during one of several uncomfortable encounters, Cuomo asked her questions about her sex life during a conversation in his state Capitol office and said he was open to relationships with women in their 20s.

She told the Times that she interpreted the exchange -- which she said took place in June, while the state was in the throes of fighting the pandemic -- as what the newspaper called "clear overtures to a sexual relationship."

Cuomo has denied her allegations, saying he believed he had been acting as a mentor and had "never made advances toward Ms. Bennett, nor did I ever intend to act in any way that was inappropriate."

CNN's calls to Bennett for comment have not been returned.

The new allegation came hours after Cuomo's office issued a formal referral that gave New York Attorney General Letitia James, a Democrat, the power to move forward with an independent investigation. In a statement, James said it is "not a responsibility we take lightly as allegations of sexual harassment should always be taken seriously."

James had rejected two previous proposals from the governor, first to have a former federal judge lead the probe, then another that would have James and New York's chief judge jointly select an independent attorney to conduct "a thorough" and "independent review" of the claims against him.

Instead, James demanded -- and Cuomo, ultimately, agreed -- that she alone would run the investigation by choosing an outside law firm that would be granted subpoena power.

The "findings will be disclosed in a public report," James said.

Though only a few state Democrats have said publicly that Cuomo should step down, the most recent allegation led to a new and more passionate round of denunciations from state legislators.

"A person who treats women this way is not fit to govern," state Sen. John Liu tweeted, with a link to the Times report that included a picture of Cuomo holding Ruch's face. Assemblyman Ron Kim, a vocal critic of Cuomo, issued a challenge to his colleagues in Albany.

"Andrew Cuomo is a coward who has abused his position of power," Kim tweeted on Monday night. "Young women are bravely holding the floodlight with their truths. To my colleagues in Albany - how much longer will you wait in the dark?"

Democrats in the state legislature are also moving toward stripping Cuomo of his expanded executive powers that they granted him to fight the coronavirus pandemic last year, according to a legislative source.

But the state's leading national political figures have been more circumspect when asked about Cuomo's fate.

Both US Senate Majority Leader Chuck Schumer and US Sen. Kirsten Gillibrand have largely sidestepped questions over the calls for the governor to resign.

On Capitol Hill, Schumer called the allegations "serious," "very troubling" and said "these women have to be listened to." But pressed by a reporter, he would not say how the sexual harassment allegations against Cuomo differ from those leveled against former Minnesota Sen. Al Franken, whom he called on to resign in 2017.

Gillibrand has also stopped short of demanding Cuomo step down. But in a statement late Tuesday afternoon, she sharpened her language, while doubling down on her support for the attorney general's investigation.

"The women who have come forward have shown tremendous courage and must be treated with respect and dignity," Gillibrand said. "The behavior described in these allegations against Governor Cuomo is completely unacceptable and every allegation of sexual harassment must be taken seriously and be reviewed."

Boylan, the former aide who first accused Cuomo of sexual harassment, said his advance included an unwanted kiss. In a Medium post last week, Boylan alleged that the Democratic governor kissed her on the lips following a one-on-one briefing in his New York City office in 2018.

"Telling my truth isn't about seeking revenge. I was proud to work in the Cuomo Administration. For so long I had looked up to the Governor. But his abusive behavior needs to stop," she wrote.

"I am speaking up because I have the privilege to do so when many others do not."

Cuomo firmly denied the allegations in a press conference in December when Boylan first made them. CNN has not been able to corroborate the allegations, and when asked for further comment, Boylan replied that she was letting her Medium post speak for itself.