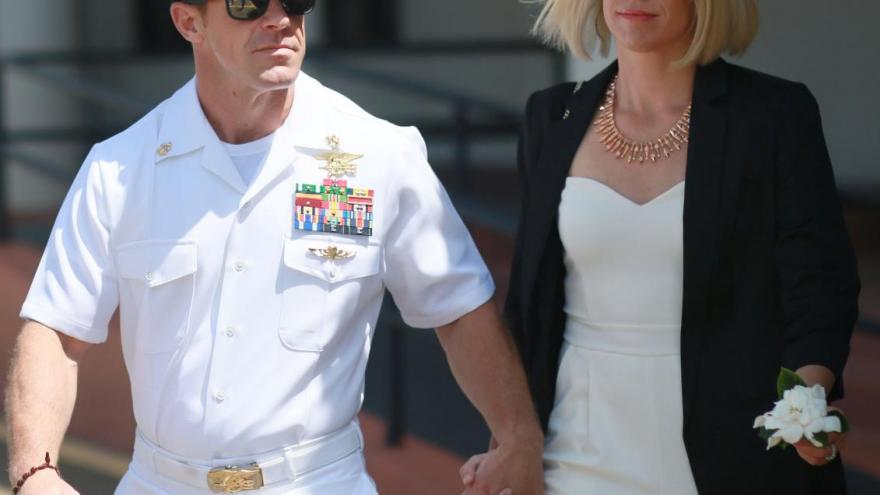 Eddie Gallagher's war crimes case gained national attention after President Donald Trump controversially intervened on his behalf, ignoring Pentagon leaders who had told the President such a move could damage the integrity of the military judicial system.

Gallagher's war crimes case gained national attention after President Donald Trump controversially intervened on his behalf, ignoring Pentagon leaders who had told the President such a move could damage the integrity of the military judicial system.

"You could tell he was perfectly O.K. with killing anybody that was moving," Special Operator First Class Corey Scott said of his former platoon leader, the newspaper reported.

In the videos obtained by the Times, the platoon members accuse Gallagher of shooting at a 12-year-old, refer to Gallagher as a "psychopath," and tell of rumors that Gallagher had targeted civilians.

The video interviews were included in a hoard of Navy investigative materials the Times received about the prosecution of Gallagher, who was accused of war crimes. They provide rare insight into the elite force with a code of silence -- and into the men of Alpha Platoon, SEAL Team 7 who have never spoken publicly about the case against their former platoon leader. The SEALs declined to comment to the Times.

"My first reaction to seeing the videos was surprise and disgust that they would make up blatant lies about me, but I quickly realized that they were scared that the truth would come out of how cowardly they acted on deployment," Gallagher said in a statement.

"I felt sorry for them that they thought it necessary to smear my name, but they never realized what the consequences of their lies would be. As upset as I was, the videos also gave me confidence because I knew that their lies would never hold up under real questioning and the jury would see through it. Their lies and (Naval Criminal Investigative Service's) refusal to ask hard questions or corroborate their stories strengthened my resolve to go to trial and clear my name."

A decorated SEAL team leader, Gallagher was convicted in July of bringing discredit to the armed services after posing in a photo next to a dead ISIS fighter's body in 2017 in Iraq, which is against regulations.

He was acquitted of premeditated murder in the death of the ISIS prisoner in Iraq. That case took a turn when a key prosecution witness testified that he caused the prisoner's death, not Gallagher. Special Operator First Class Corey Scott, a SEAL medic, said that he saw Gallagher pull out his knife and stab the prisoner under his collarbone at least once.

On cross-examination, Scott told the defense that he never saw any blood after the stabbing. That's when Scott claimed he caused the prisoner's death by holding his thumb over his trachea tube until he suffocated. Scott described the killing as an act of mercy because he was concerned the boy -- a prisoner of the Iraqi forces -- would be tortured by the Iraqis.

Following the trial, Gallagher was demoted in rank -- a decision Trump reversed in a move that angered military officials and led to a review of Gallagher's status in the elite group.

Gallagher retired from the Navy on November 30 as planned.