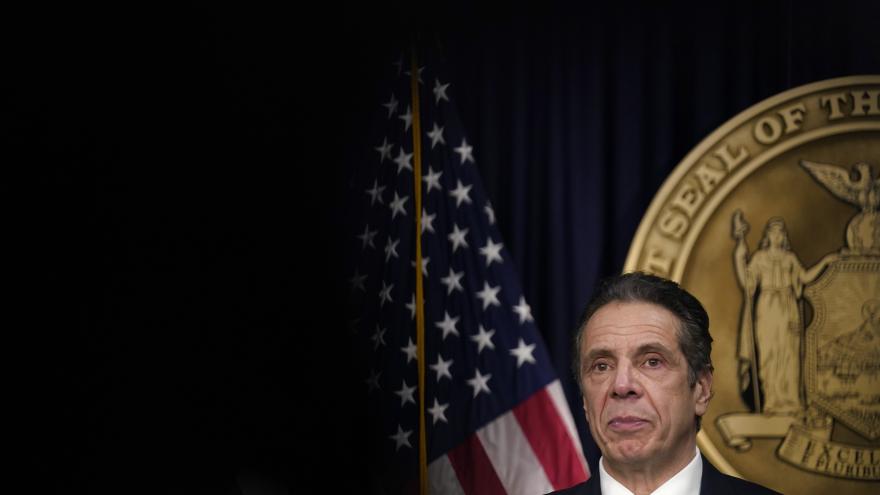 (CNN) -- Alyssa McGrath, a current aide to New York Gov. Andrew Cuomo, joined a chorus of other women in accusing the governor of sexual harassment, accusing the Democrat of having behaved and spoken to her in an inappropriate sexual manner, The New York Times reported Friday.

McGrath told the Times that Cuomo looked down her shirt during a one-on-one meeting, stared at her body, commented on her appearance and made suggestive comments to her and another executive aide. Additionally, Cuomo labeled her and a co-worker "mingle mamas," asked about her divorce proceedings and lack of a wedding ring, and told her that she was beautiful in Italian, she told the paper. She did not accuse Cuomo of making sexual contact, but characterized his actions as sexual harassment.

McGrath's allegations echo those of other accusers -- including former staffer Ana Liss, who says she met with investigators from the New York Attorney General's Office on Thursday. The investigation into the multiple sexual harassment allegations facing the embattled governor has been ramping up in recent days, with Liss, Charlotte Bennett and Lindsey Boylan -- all former staffers who have also accused Cuomo of sexual harassment -- all meeting with investigators this week, CNN has reported.

During multiple interviews with the Times this week, McGrath asserted that Cuomo habitually interspersed personal conversation with flirtation and encouraged competition among female co-workers -- a trend normalized and exacerbated by demands for secrecy.

"He has a way of making you feel very comfortable around him, almost like you're his friend," McGrath told the Times. "But then you walk away from the encounter or conversation, in your head going, 'I can't believe I just had that interaction with the governor of New York.' "

Later reflecting on the interactions as problematic, McGrath became more disconcerted as allegations continued to mount against Cuomo, which he consistently denied.

Cuomo's attorney Rita Glavin responded to McGrath's allegations, telling the Times that "the governor has greeted men and women with hugs and a kiss on the cheek, forehead, or hand. Yes, he has posed for photographs with his arm around them. Yes, he uses Italian phrases like 'ciao bella.' "

Glavin added, "None of this is remarkable, although it may be old-fashioned. He has made clear that he has never made inappropriate advances or inappropriately touched anyone."

In a statement Friday evening, McGrath's attorney Mariann Wang said that "the governor's deflections are not credible."

McGrath, who does not report directly to the governor, told the Times that she and her co-worker were often selected from the cohort of executive chamber assistants to work on weekends and at the governor's mansion. Many of the chamber's assistants are women decades younger than Cuomo who make between $40,000 and $60,000 a year, per the Times.

The Times reviewed and described emails in which high-ranking Cuomo associates made such requests.

"Hi gals," read one email from a top scheduling official in Cuomo's office to the two women on Feb. 29, 2020, per the Times. "Who can spend a little while with him when he gets back on the book signing project?"

That day McGrath and her co-worker worked alone in the state Capitol with the governor, who asked if McGrath's co-worker was going to try to meet men and "mingle" on the two women's upcoming trip to Florida and "called us 'mingle mamas' for the rest of the day," McGrath told the paper.

McGrath also recalled an incident in early 2019, when while preparing for work at the governor's mansion, Cuomo asked if she spoke Italian. When McGrath said she did not, he made a comment in Italian, the meaning of which she later asked her parents.

"It was commenting on how beautiful I was," McGrath recalled to the paper being told, an account confirmed to the Times by her mother.

McGrath told the Times that not long after that encounter, she sat for a one-on-one dictation session with the governor.

"I put my head down waiting for him to start speaking, and he didn't start speaking," she told the paper. "So I looked up to see what was going on. And he was blatantly looking down my shirt."

Becoming aware of her gaze, Cuomo "made a reference, a subtle reference, saying, 'What's on your necklace?' Which was in my shirt," she told the Times, adding that "my face turned really hot" as she continued to work, embarrassed. McGrath discussed the incident at the time with her co-worker, per the Times.

The investigation into the sexual harassment allegations is being led by attorneys Joon Kim, a former prosecutor with the US Attorney's Office for the Southern District of New York, and Anne Clark, an employment discrimination attorney. The duo was selected by New York Attorney General Letitia James to lead the probe.

McGrath told the Times that she saw Cuomo's initial news conference earlier this month after Bennett shared her accusations against him, and felt angry at his assertion that he never "touched anyone inappropriately."

"It makes me really upset to hear him speak about this and completely deny all allegations," she told the paper, adding that she was incredulous at his remarks. "And I have no doubt in my mind that all of these accusers are telling the truth."