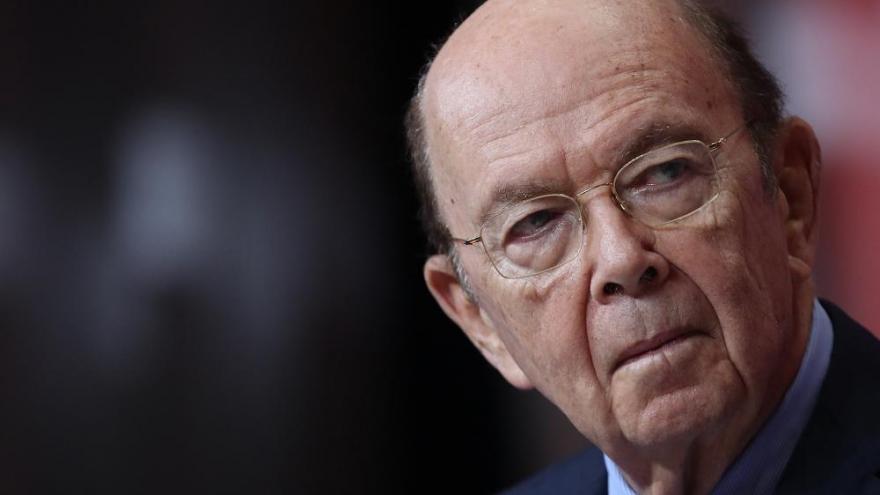 Commerce Secretary Wilbur Ross threatened to fire top National Oceanic and Atmospheric Administration employees if the agency didn't disavow a tweet from a regional office that contradicted President Donald Trump's false claim that Hurricane Dorian was likely to hit Alabama, according to a report by The New York Times.

(CNN) -- Commerce Secretary Wilbur Ross threatened to fire top National Oceanic and Atmospheric Administration employees if the agency didn't disavow a tweet from a regional office that contradicted President Donald Trump's false claim that Hurricane Dorian was likely to hit Alabama, according to a report by The New York Times.

According to three people cited in the Times report on Monday, Ross called acting NOAA Administrator Neil Jacobs and told him to fix the National Weather Service's contradiction of Trump's claim. When Jacobs opposed the demand, Ross told him NOAA's political staff would be fired, the Times reported.

The report also says Ross' threat to fire the employees is what caused NOAA on Friday to disavow a tweet from the NWS' Birmingham, Alabama, office that had contradicted Trump's claim.

"The New York Times story is false," the spokesperson said. "Secretary Ross did not threaten to fire any NOAA staff over forecasting and public statements about Hurricane Dorian."

NOAA spokesman Scott Smullen referred questions on the report to the Commerce Department.

Ross' alleged actions are the latest development in an ongoing saga surrounding the President's false assertion about Hurricane Dorian affecting the state. It also comes a day after a NOAA official said he will investigate if the agency violated its own ethics when it backed Trump's tweets about the hurricane over its experts.

Trump's tweet that Hurricane Dorian would hit Alabama caused confusion last week. The controversy grew deeper after Trump showed off an apparently altered map of a forecast from NOAA that showed a black line drawn in marker over the state to imply Dorian's track would have taken it deep into the Gulf state. The Washington Post reported Sunday that the NWS sent a memo to staffers last week directing them to focus on Hurricane Dorian and not "national level social media posts," an apparent reference to Trump's claims.

The Times report caused one Democrat on the House Science, Space and Technology Committee -- Rep. Don Beyer, of Virginia -- to call for Ross' resignation.

"His direct attacks on the scientists and federal employees, whom he threatened to fire for doing their jobs by accurately reporting the weather, are an embarrassing new low for a member of this Cabinet which has been historically venal and incompetent," Beyer said in a statement.

Connecticut Democratic Rep. Jim Himes, a member of the House Intelligence Committee, told CNN's Wolf Blitzer on "The Situation Room" that Ross should resign if the story is accurate.

"If that story is true, I don't know that it is, if it is true, the commerce secretary needs to resign now," Himes said on Monday. "That would be the most blatant use of an official position in the service of the ego and the political fortunes of the President that we have ever seen."

He said the situation is serious because people rely on information from NOAA in making decisions when there is a threat of a hurricane. He added, "If the commerce secretary is saying I don't care what's true, here is what the President wants, he needs to go and he needs to go yesterday."

"We want the weather service to operate with integrity and without bias," he told CNN.

Thune, is the second-ranking GOP leader and just-past chairman of the Commerce Committee, which has oversight of the Commerce Department and NOAA. He said he could not independently confirm the threatened firing.

"I haven't heard that yet but I am sure if they did, I will," he said.