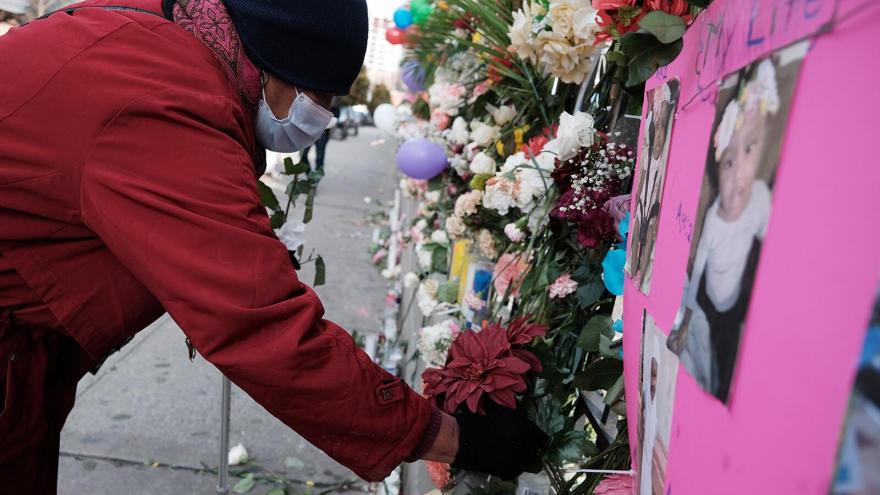 People visit a memorial set up for the victims outside the apartment building where a five-alarm fire took place on January 14, in the Bronx borough of New York City.

Benjamin made the announcement at a mass public funeral for the victims at the Islamic Cultural Center in the Bronx on Sunday morning.

"As the Lieutenant Governor of New York State, I stand here on behalf of Governor Kathy Hochul to say 'we will be with you to be sure that this tragedy never happens again and we will make sure that all of the families -- the 15 here, the two who are not here, and all of the families who were impacted by this fire -- know that the state will stand up and support,'" Benjamin said.

The fund will "will provide tenants with case management services, personal property replacement, and relocation and rental assistance to help address critical household needs," according to a press release from Governor Hochul's office.

State officials will work with BronxWorks, a nonprofit organization contracted through the state's Emergency Needs for the Homeless Program.

The organization will provide intake staff at a New York City service center and will also offer services such as burial assistance "and other support to help meet critical household needs such as loss of income due to the death of a household member," the release states.

The fire started when a space heater malfunctioned in a third-floor duplex, a fire official told CNN.

The self-closing front door of the unit failed to close, according to fire officials. The fire-fueled smoke spread upward to the 15th floor, where another door failed to close automatically. Victims were found in stairwells on every floor, many in cardiac and respiratory arrest.

All 17 victims -- including eight children -- died of smoke inhalation, according to the city medical examiner. Nearly all of them were immigrants from The Gambia and other West African countries.

New York Senator Chuck Schumer said at Sunday's funeral family members of victims in The Gambia will be allowed to visit New York to be with their loved ones during this time.

Schumer said he worked alongside Congressman Ritchie Torres to open the Gambian Embassy, which has been closed due to Covid-19, to make it possible to receive them. Family members will begin arriving early this week, according to Schumer.

New York Attorney General Letitia James, and New York City Mayor Eric Adams also attended and spoke at the funeral service. Adams said he and his colleagues believe the fire should not be the legacy of the Bronx and its residents should not be forced to live without basic necessities they deserve.

"But what is happening here in the Bronx is what's happening here across our city in communities with Black, brown, and immigrant people are. It is time to end those inequalities, so we don't have our babies and our families torn apart by tragedy. The American Dream for too many burnt in that fire. It is our obligation to make sure that same dream remains alive for all others," Adams said.

The dead included Haji Dukary, 49, his wife, Haja Dukureh, 37, and their three young children. Fatoumata Tunkara, 43, and her 6-year-old son, Omar Jambang. Fatoumata Drammeh, 50, and three of her children. There was Seydou Toure, 12, and 5-year-old sister Haouwa Mahamadou. The youngest victim was 2-year-old Ousmane Konteh.