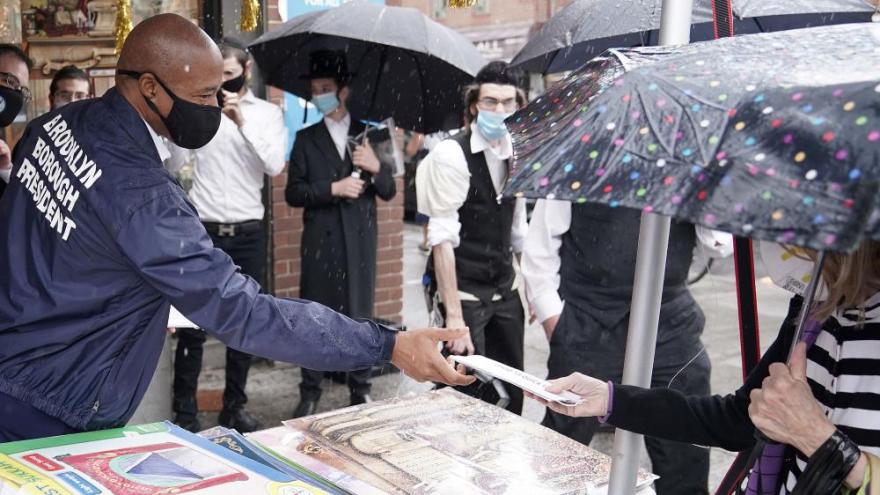 Gov. Andrew Cuomo said that 20 "hot spot" zip codes, including parts of Brooklyn, Queens and Orange and Rockland counties, had a collective positivity rate of 5.5%, more than five times the statewide rate. One zip code in Orange County, for example, had a positivity rate of 18%.

On Wednesday, Cuomo said he had a "good conversation" with Orthodox Jewish community leaders in hot spot cluster areas that morning. He said those leaders are working with officials to come up with an action plan particularly ahead of the Friday holiday of Sukkot.

Cuomo said the outbreaks stemmed from a lack of mask-wearing in these communities, and he blamed the myth of herd immunity, President Trump's criticisms of masks, and local governments' lack of enforcement.

"There was no one point but ... I think those were the top three rationales," he said.

The clusters represent the sharpest increase in cases in months in New York, where strict rules on mask-wearing and indoor gatherings have kept cases relatively low since the spring.

This rise in cases is causing particular concern in New York City, where elementary schools opened Tuesday for the first time since March. Middle and high schools are set to reopen for in-person classes on Thursday.

That opening could be short-lived if the increases continue. Mayor Bill de Blasio has said that all schools will close if the 7-day average positivity rate goes over 3%.

On Tuesday, the single-day positivity rate shot up to 3.25%, the highest it has been in months, but then declined to .94% on Wednesday, de Blasio said. The 7-day rate sits at 1.46% as of Wednesday.

Dr. Dave Chokshi, the NYC Commissioner of the Department of Health, said nine neighborhoods in Brooklyn and Queens account for 25% of the city's Covid-19 cases over the past two weeks, even though the areas make up just 7% of the city's population.

So far, the clusters of cases have not moved into newly opened public schools.

"We have a very unusual situation here, we have an uptick in a discrete set of zip codes and we are not seeing an interconnection to our public school system," de Blasio said.

The mayor asked everyone in those areas to get tested and said further restrictions could be coming.

"This is an inflection point. We have to take more action at this point and more serious action, and we will be escalating with each day depending on what we see happening on the ground and the test results we are getting," he said.

Given the outbreaks, officials announced a surge of testing and renewed measures to enforce existing health laws in the affected areas.

Dr. Mitch Katz, the President and CEO of NYC Health and Hospitals public system, said testing capacity will be increased with 11 mobile testing units moved to these zip codes. In addition, rapid testing will be added at community provider offices in Orthodox Jewish communities and at three Health and Hospitals locations -- one in Queens and two in Brooklyn.

Also, a multi-agency team from the Department of Health, the Test and Trace Corps, and enforcement agencies will be visiting private schools and early education centers to ensure they are in compliance with city health rules, according to Chokshi.

The Sheriff, NYPD and other agencies with personnel to offer were asked to help with enforcement, de Blasio said.

On Tuesday, Dr. Katz said city officials met with a group of Orthodox Jewish leaders, who were fully supportive of the city handing out masks and enforcing their use.

Still, these enforcement efforts may be more difficult given de Blasio's fraught relationship with the Orthodox Jewish community.

Back in April, de Blasio broadly criticized the Jewish community after thousands of Orthodox Jews gathered for the funeral of a prominent rabbi in Brooklyn, who died of Covid-19. The mayor apologized for his language the next day, saying, "I regret if the way I said it in any way gave people a feeling of being treated the wrong way." Still, he emphasized that the large gatherings put people in danger.

In New York, London and Israel, some ultra-Orthodox communities have ignored social distancing and mask rules and had deadly outbreaks.

Experts said some ultra-Orthodox Jews have been reluctant to change their behaviors for religious, cultural and demographic reasons, and because their communities are largely cut off from wider society.

"It's the center of their life, the religion, and they can't live without it," Gilad Malach, the director of the Ultra-Orthodox in Israel Program at the Israel Democracy Institute, told CNN in May. "The most important thing in their life is their religious behavior and traditions, and it's very hard for them to change it. They see it as a religious obligation."

Gov. Cuomo attributed the cluster of new cases to people not wearing masks, which protect the wearer and others from coronavirus.

The opposition to mask-wearing in some of these communities is not based on religion, but on other factors, he said Wednesday.

Some declined to wear masks based on the myth of herd immunity. Herd immunity is the idea that when a high percentage of people in a community have become infected and survive, that community may be less susceptible to outbreaks. But health experts have repeatedly said these communities have not reached that point, and that people still need to wear masks and social distance.

Others declined to wear masks because they listen to President Trump, who has waffled on whether they are effective and mocked those who wear one. Cuomo also criticized local governments for not enforcing the state's mask requirements.

Indeed, Orange County Executive Steven M. Neuhaus said Monday that he had heard from a number of citizens who reported others not wearing masks. He said the lack of adherence to mask requirements was very disappointing.

"What it comes down to in my opinion is people having lack of respect for each other," he said.

In Rockland County, which has the highest per capita Jewish population in the US, Covid-19 cases and the test positivity rate have sharply risen in the past few weeks. From September 5 to September 27, the 7-day average positivity rate rose from 2% up to 5.57%, the highest it has been since May, according to county data.

The county reported 672 active cases, led by 256 active cases in Spring Valley and 221 in Monsey.

In a statement on Monday, Rockland County Executive Ed Day thanked the state for sending additional testing machines and test kits to the county.

"It is concerning that the number of active cases continues to increase throughout Rockland and significantly increase within two zip codes within the Town of Ramapo," he said.

"I am both privately and publicly urging local municipalities to utilize their employees such as building and fire inspectors and police in educational efforts. It is my expectation that appropriate enforcement action will be taken, as necessary. (i.e. building or fire code violations, summonses, etc.)"