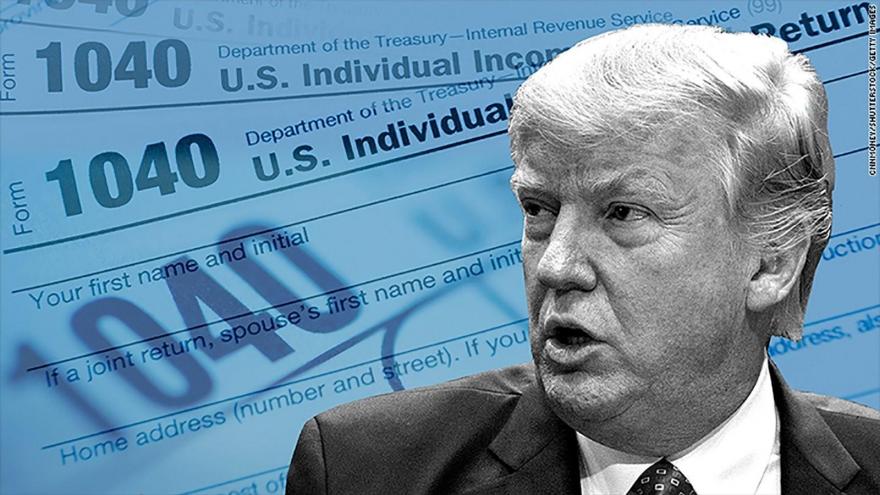 President Donald Trump has declined to release his federal tax returns, but New York legislators are pushing a bill aimed at enabling the release of his state returns. Full Credit: CNNMoney/Shutterstock/Getty Images

On Tuesday, a bill authorizing the release of state returns to Congress moved out of the State Senate's Budget and Revenue Committee.

The bill is expected to be taken up on the floor of the State Senate next week. If passed, it will allow the state's tax commissioner to hand over any New York tax returns at the request of the US House of Representatives Ways and Means Committee, the US Senate Finance Committee or the Joint Committee on Taxation.

State Democrats are hopeful it will present a way around the President's refusal to release his federal filings.

The bill's initial sponsor, Democratic State Sen. Brad Hoylman, said on Tuesday that he expects the bill to pass.

"It has 33 cosponsors including the leadership," Hoylman said. "That suggests widespread support by the Senate."

"It will pass next week," he said via email.

A companion bill is working its way through the State Assembly, shepherded by Democratic State Assemblyman David Buchwald. Though that bill is still before the Assembly Ways and Means Committee, Buchwald said he expects it to pass.

"I believe the New York State Assembly should and will agree to a legislative path forward on this topic," he said in an emailed statement.

Minority leaders for both houses did not immediately respond to requests for comment.

Earlier this month, Assembly Minority Leader Brian Kolb said the bill was "political grandstanding," and that tax returns should stay "between the taxpayer, the IRS or New York State Tax and Finance Department."

Democratic New York Gov. Andrew Cuomo said Tuesday that he would support the bill should it arrive on his desk.

"We believe everybody running for office -- whether it's federal, whether it's state -- should release their tax returns. This measure, as long as it applies to everybody, we support."

Though the legislation would enable the release only of the President's state returns, the fact that much of his business has been conducted in New York means that such returns could be nearly as telling as his federal returns.

Trump has repeatedly declined to release his tax returns, the first president in more than 40 years to decline. He has said ongoing Internal Revenue Service audits prevent him from releasing his returns, despite the fact that no such audit would prohibit their release.