New York Police Department's budget has been slashed by $1 billion 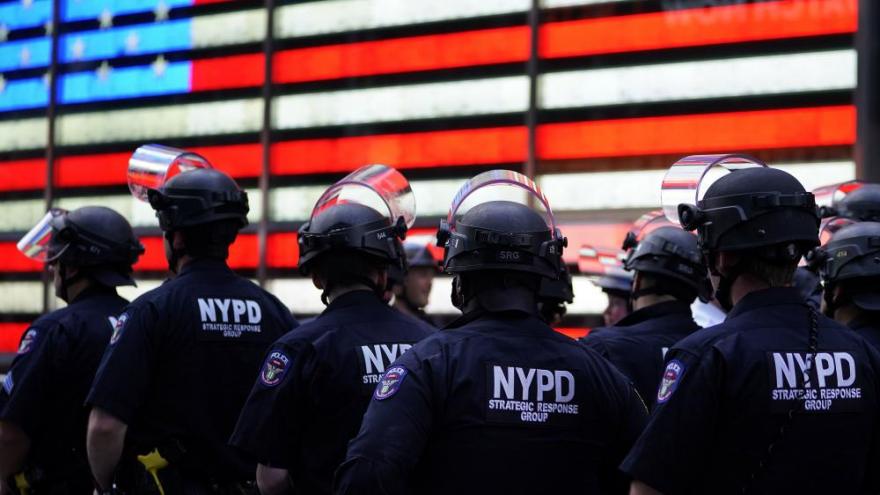 Facing pressure from thousands of constituents calling to defund the police, New York slashed $1 billion from the city's police budget.

(CNN) -- Facing pressure from thousands of constituents calling to defund the police, New York City slashed $1 billion from the police budget. But some city lawmakers -- and the protesters calling for change -- think the cuts weren't sweeping enough.

The City Council approved the $88.9 billion 2021 budget late Tuesday night while hundreds of protesters, many of whom have camped outside City Hall for a week, waited to hear the results.

The New York Police Department is the largest force in the US and employs over 55,000. The department budget was almost $6 billion for the 2020 fiscal year.

The approved budget includes nearly $484 million in cuts and will reallocate $354 million to other agencies "best positioned to carry out the duties that have been previously assigned to the New York Police Department, like the Department of Education, the Department of Health & Mental Hygiene and the Department of Homeless Services. Another $162 million was slashed through "associated costs," the council said in a statement.

The approved budget also moves about $500 million of the department's capital budget to other "badly needed infrastructure," the City Council said, and reduces overtime spending by $352 million.

The NYPD will also transfer control of the city's school safety program to the Department of Education, the council said. The NYPD will remove crossing guards and pull out of homeless outreach services since, the council said, "police often merely moved these individuals from one unsafer spot to another, continuing the cycle of injustice."

"This was a hard-fought battle, which marks the beginning of the Council's efforts to not only limit the size and scope of the NYPD, but also reimagine how we structure criminal justice and public safety in this city," the city council said.

On Tuesday, as Mayor Bill de Blasio announced a budget deal was reached, he said he felt it was important to take money from the NYPD's capital program and put it into the hands of young people and communities in need.

"I said, we have to keep the city safe, we have to protect the levels of patrol strength throughout our communities," de Blasio said. "And we had to make sure that we were really doing something to refocus resources on young people and on communities hardest hit."

Tensions between NYPD and New Yorkers boiled over in May, during protests against racism and police brutality, and often resulted in violence. Among other incidents, city officials are investigating the department after a police cruiser was filmed driving into a crowd of protesters, and an officer accused of shoving a protester to the ground and concussing her was arrested.

Calls to defund or abolish the police have becoming a familiar demand at police brutality protests across the country. So far, just Minneapolis has pledged to look at ways to dismantle its existing police department after four officers were charged with the killing of George Floyd, an unarmed Black man whose death spurred the protests.

"This isn't a billion dollars. And I'm not going to pretend that it is," Johnson said. "To everyone who is disappointed that we did not go farther I want to let you know -- I am disappointed as well ... But this budget process involves the mayor who was not budging."

Johnson said he wanted a full hiring freeze, but this budget will still allow for two new police classes to be added. He said he also wanted a bigger headcount reduction, but this budget cuts about 1,163 officers through attribution and by eliminating two police cadet classes. The NYPD employs around 36,000 officers.

Comptroller Scott Stringer called the announced NYPD budget cuts a "bait and switch and a paper thin excuse for reform."

Stringer said the "excuses" include proposals to slash uniformed police overtime by 60% with "no plan on how to get there."

"Meaningful change in this moment won't come by shifting police from one agency to another, and budget tricks won't bring an end to the status quo," he said in a statement. "The movement in the streets won't be suppressed by manipulated math."

Stringer, who certifies the budget but does not have veto power, proposed his own plan to cut $265 million from the budget, which he said was a baseline suggestion.

New York Public Advocate Jumaane Williams said he'd block the budget during the final tax warrant process if it didn't include a full hiring freeze for the police department. Part of the city budget did include a hiring freeze on Department of Education employees, officials said Tuesday.

Some lawmakers believed the budget's cuts went too far.

Councilman Robert Holden, who voted against the budget, said he did so because of the cuts being made to the number of police officers.

"We've become a body politic that crafts policies from signs at protests," Holden said. "Today's budget may be the final nail in the coffin for this city and its safety."

"Mayor de Blasio's message to New Yorkers today was clear: you will have fewer cops on your streets," Lynch said in a statement.

"Shootings more than doubled again last week. Even right now, the NYPD doesn't have enough staffing to shift cops to one neighborhood without making another neighborhood less safe. We will say it again: the Mayor and the City Council have surrendered the city to lawlessness. Things won't improve until New Yorkers hold them responsible."

Some protesters, many of whom have called for fewer police on patrol in the city, told CNN affiliate WLNY they plan to continue to occupy City Hall even now that officials have voted on the budget.