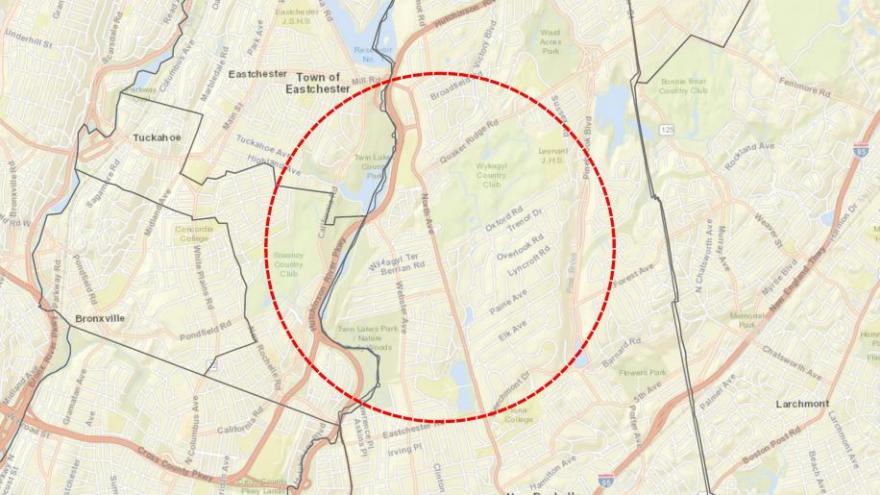 The one-mile radius originates from Temple Young Israel in New Rochelle according to Governor Cuomo's office.

(CNN) -- In one small suburb on the outskirts of New York City, coronavirus cases jumped from one to more than 100 in less than 10 days.

Now the state's governor is trying to catch up to the virus by setting up a containment area around New Rochelle and deploying the National Guard to assist with food deliveries and clean public spaces.

"We'll go in, we'll clean the schools and assess the situation," New York Gov. Andrew Cuomo said. "This will be a period of disruption for the community."

New Rochelle is about 25 miles outside of New York City.

The issue, the governor says, is "a matter of life and death." And it started with one resident.

The 50-year-old attorney, who works near Grand Central Station in Manhattan, tested positive for the virus on March 2 and was hospitalized at New York-Presbyterian/Columbia University Irving Medical Center, Cuomo said.

The governor later said the man was New York City's first case of community spread -- meaning officials could not trace the source of his infection.

The man had an underlying respiratory condition that made him vulnerable to the virus but he was stable and improving, officials also said later.

Just two days after the man's positive results, on March 4, his 20-year-old son, a student at New York's Yeshiva University, also tested positive. School officials said he was showing symptoms of the virus.

The wife and 14-year-old daughter of the attorney both also tested positive on the same day.

So did the neighbor who drove him to the hospital.

And a friend of the attorney.

The friend's wife, two sons and daughter tested positive that day too.

The day after, on March 5, the governor says eight other people connected to the attorney tested positive for the virus.

On March 6, three members of the Young Israel Congregation of New Rochelle, where the attorney attended, tested positive for the virus.

Another two friends of the attorney tested positive, too. And four more people related to the attorney also had the virus, the governor said.

And so did two residents from nearby Rockland County who worked as caterers in the bar mitzvah the attorney was believed to have attended.

23 others linked to one person

On March 7, the governor announced 23 others linked to the attorney had the virus.

The day after, he said 12 more cases were reported in Westchester County, which is home to New Rochelle. By March 10, there were 108 cases in New Rochelle.

As Cuomo announced the deployment of the National Guard Tuesday, he declared New Rochelle a "true geographic cluster."

The National Guard will be helping combat the spread through March 25, the governor said.