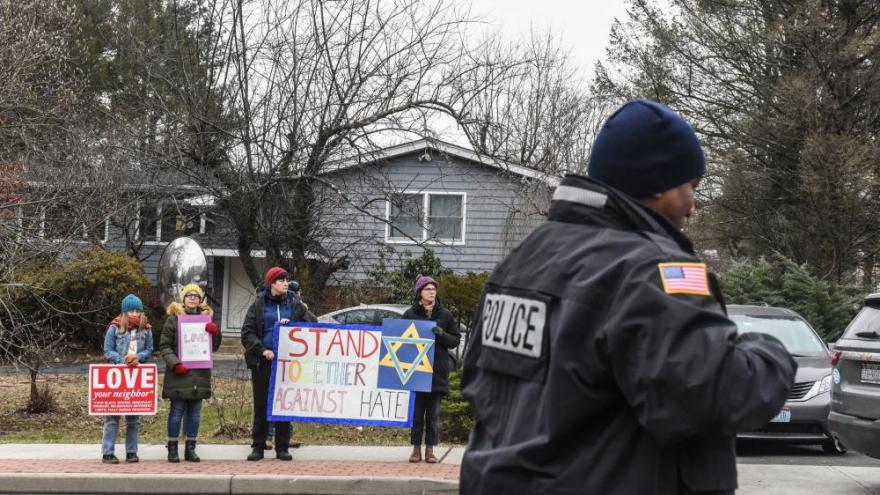 (CNN) -- In the aftermath of a mass stabbing in a New York suburb Saturday and a string of other attacks in recent weeks targeting the state's Jewish community, officials are calling for more protection.

Grafton Thomas allegedly stabbed five people who had gathered in a rabbi's home in Rockland County for a Hanukkah celebration -- adding to a list of about a dozen other anti-Semitic acts in the state in the past three weeks, New York Gov. Andrew Cuomo said. Last week, there was an attack on Jewish New Yorkers almost every day.

"When will enough be enough? These heinous attacks make something abundantly clear: the Jewish community needs greater protection," the Anti-Defamation League said in a statement. "We are calling for increased protection for the Jewish community now and for those in positions of power and leadership to guarantee that the full force of the law is brought down on those who perpetrate these horrific crimes."

Following the stabbings, Cuomo announced he had directed state police to increase patrols in Orthodox Jewish neighborhoods across the state.

Four state lawmakers asked the governor in a letter to also send out the state's National Guard to "visibly patrol and protect" those areas.

"Simply stated, it is no longer safe to be identifiably Orthodox in the State of New York," the lawmakers wrote. "We cannot shop, walk down a street, send our children to school, or even worship in peace."

Meanwhile, officials in New York City have begun to beef up security in multiple communities.

"We will keep adding as many measures as it takes to end this crisis," he said in a news conference Sunday. "We have to give people a sense of security and we have to show that this horrible trend we've seen over the last weeks will be stopped dead in its tracks."

New York Police Department Commissioner Dermot Shea said the department had already begun boosting deployment to all houses of worship following a shooting in Jersey City earlier this month in a Jewish market, as well as "an increase in swastikas, an increase in hate speech, escalation into shoving" and "some assaults."

The mayor also said Sunday the NYPD had earlier created a unit to combat "ethnically and racially-motivated extremism."

"This is something that may not have seemed necessary a few years ago but it sure is necessary now," he said.

De Blasio said officials have also added about 15 light towers in Brooklyn neighborhoods and will be adding more, as well as security cameras.

"And that phrase, 'If you see something, say something,' really matters now," the mayor said. "Do not hesitate, call 911."

He said he knew residents in the city, "even with the best police force in the world," are feeling fearful.

"I've talked to people in my own life, friends I've known for a long time who are hesitating, who are worrying that if they put on a symbol of their Jewish faith they might be targeted," he said. "That is not acceptable in New York City or anywhere in this country or anywhere in this world. We cannot let that be the new normal."

But it's not just physical security that officials are changing.

De Blasio said the creation of "neighborhood safety coalitions" will allow communities to work together at a grassroots level to help residents catch signs of violence and "stop them before (anything) happens."

"You'll see clergy and community leaders and activists of different communities out in the streets working together talking to young people, engaging, being present where there is a problem, showing that... there is one form of intolerance that we all agree with -- intolerance towards violence."

That will start next month, de Blasio said, along with another initiative: teaching young people that "hatred only breeds more hatred."

"We think back to the horrors of the 1930s and the 1940s... we're reminded that when hatred takes a violent form it then moves from one community to the next to the next," de Blasio said. "Our young people have to understand this history but we have to teach it to them."

He said New York City communities will see these additions in schools' curricula in January.

The governor also called for legislative changes to address any future similar attacks. Cuomo said he wanted to propose a law which would make New York the first state to treat these types of incidents as domestic terrorism.

"These are terrorists in our country perpetrating terrorism on other Americans, and that's how we should treat it and that's how I want the laws in this state to treat it."

The four lawmakers who wrote to the governor also asked for a change in prosecution.

"In addition, we are asking that you appoint a special prosecutor for purposes of investigating and prosecuting perpetrators of anti-Semitic violence, and that the special prosecutor immediately assume control of cases already under the jurisdiction of local district attorneys," the lawmakers said in a joint letter.

New York Attorney General Letitia James said attackers who target the Jewish community should be "prosecuted to the fullest extent of the law.

"It's really critically important that all of us understand that what is happening is really a symbol of hate and also discrimination," she said Sunday.