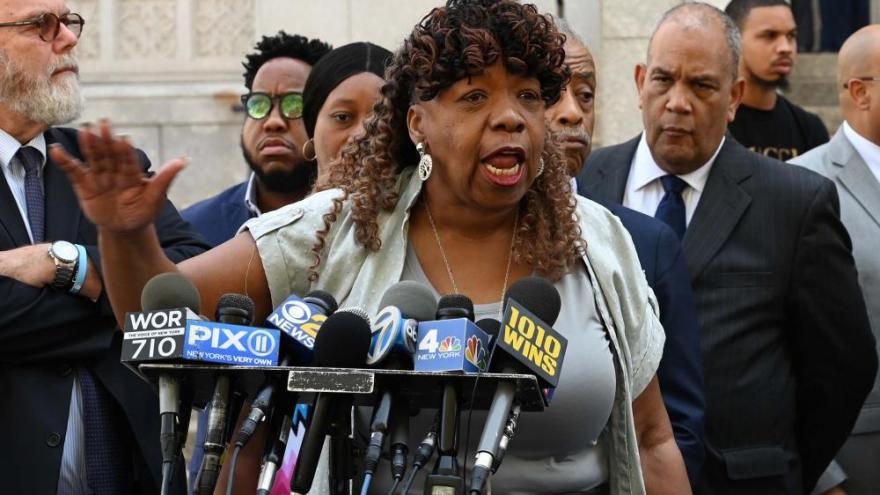 Eric Garner's mother has won her bid for an investigation into New York City's handling of the arrest of her son, the disciplining of officers involved in his 2014 death and the lack of medical care he was given by police officers, a state judge ruled.

(CNN) -- Eric Garner's mother has won her bid for an investigation into New York City's handling of the arrest of her son, the disciplining of officers involved in his 2014 death and the lack of medical care he was given by police officers, a state judge ruled.

"Although the arrest and death of Eric Garner has received considerable attention in the press over the past six years, many facts relating to his arrest and death, and the investigations and any disciplinary actions taken in response to his death, have not been disclosed to the public or to the family of Mr. Garner," New York State Supreme Court Judge Joan Madden wrote in her Thursday decision.

Gwen Carr, Garner's mother, wants to be able to question officials including New York City Mayor Bill de Blasio, former New York Police Commissioner James O'Neill and others as part of an inquiry into potential violations and "neglect of duties" in their handling of Garner's arrest and death. CNN has reached out to McNeill and to de Blasio's office comment.

What Carr petitioned for is known as a summary judicial inquiry, a procedure created by the New York City charter that allows for certain people to be allowed to petition a judge to conduct an inquiry into "any alleged violation or neglect of duty in relation to ... the government or affairs of the city" in which the people being investigated may be required to attend and be questioned.

The officer seen holding Garner in a chokehold before he died, Daniel Pantaleo, was given a disciplinary trial in 2019, when an administrative judge overseeing the trial found Pantaleo committed "grave misconduct" and recommended he be fired.

Pantaleo was fired by the NYPD days later. Pantaleo was never criminally charged. He sued the police department in 2019 asking for his reinstatement, but the case is no longer active.

Carr's petition asks the inquiry to go beyond Pantaleo's actions, and wants to ask other city officials questions about Garner's arrest and the force used by officers on him.

They also want to ask city officials about possible failures to train NYPD officers in the use of force and chokeholds and possible violations for filing "false official NYPD documents" concerning Garner's arrest.

The petition also seeks to ask city officials about possible false statements that were made during an internal investigation, leaking of Garner's arrest record and medical history, and about "incomplete and inaccurate" statements to the media by the city about the incident.

"It has been more than six long years since the NYPD killed my son, and six long years of cover ups and excuses from Mayor de Blasio and his entire administration. Today is an important sign of hope that their misdeeds will not stay in the dark -- the world will know what they did to my son and my family," said Carr.

"We have seen the video. We have heard my son cry 'I can't breathe' as he died. Now we have a chance to finally show that the Mayor has allowed the police department to get away with murder -- and the related cover-up. I hope New Yorkers join me in my ongoing demand for the immediate firing of all the officers who engaged in misconduct related to my son's murder."

New York City's law department argued in its filings that the part of the city charter that allows for a judicial inquiry is meant to be used for concerns of "corruption and misapplication of funds."

In response to the judge's decision, a spokesman for the Law Department for New York City said the office is appealing the decision and that officers were held accountable in Garner's death.

"So much information about the incident has been made available through the various investigations," said Nick Paolucci, Law Department spokesman.

"There is no evidence that the Mayor or any other agency head or official neglected their duties or otherwise violated the law. There is no legal basis for a judicial inquiry to second guess the decisions that the law vests in the mayor and police commissioner."

Alvin Bragg and Gideon Oliver, attorneys with Communities United for Police Reform, who are representing Carr and others in the case, said the decision allows for accountability for de Blasio and NYPD officials who have "have proven themselves time and time again unaccountable in any meaningful way to the families of those killed by police."

"For years, the City and the NYPD have made every effort to avoid public scrutiny around the NYPD killing of Eric Garner and their insufficient investigations and other responses," Bragg and Gideon said in a statement. "(Thursday's) decision ordering a public judicial inquiry creates a real opportunity for public transparency -- including around the Mayor's and NYPD's political choices about what to do (and what not do to) in response."