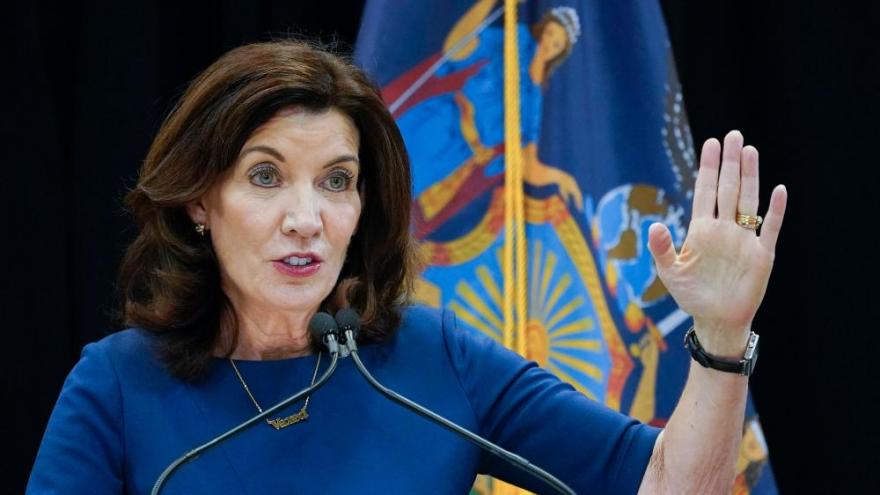 New York Governor Kathy Hochul has announced a new temporary indoor mask mandate, but at least one county leader says he won't be enforcing it.

(CNN) -- New York Governor Kathy Hochul has announced a new temporary indoor mask mandate, but at least one county leader says he won't be enforcing it.

On Friday, Hochul announced the rule, in place from Monday, December 13, until at least January 15, 2022. It requires New Yorkers to wear a mask in all indoor public spaces unless businesses implement a vaccine requirement.

The governor said she is trying to get ahead of what she calls a "winter surge" for three main reasons: Increased cases, reduced hospital capacity and insufficient vaccination rates in certain areas, according to a press release.

Anyone who violates the mask mandate could face fines of up to $1,000 and is subject to all civil and criminal penalties.

But the mandate brought a sharp response from one county leader.

According to a statement from Rockland County Executive Ed Day, "I told the Governor's staff that we cannot and will not enforce this requirement as it currently stands. How do you enforce something that's based on a press release that does not contain adequate information and explanation? The Governor has said that this program will be reevaluated on January 15, 2022, but what metrics will be used as part of this reevaluation?"

Hochul's announcement has left county officials "fielding questions from our citizens that have no answers; an incredibly frustrating situation caused solely by poor communication from New York State and Governor Hochul," Day said.

More than 80% of New Yorkers ages 18 and up are fully vaccinated, but since Thanksgiving, New York's seven-day average of new Covid-19 cases has increased by 43%.

Hospitalizations are up 29%, according to a statement from the governor's office.

On Thursday, Hochul said that at least 32 hospitals across the state had to suspend elective surgeries to free up hospital beds to treat Covid-19 patients.

She also indicated last week that she may deploy the National Guard to some 50 hospitals in Upstate New York that had less than 10% bed capacity.