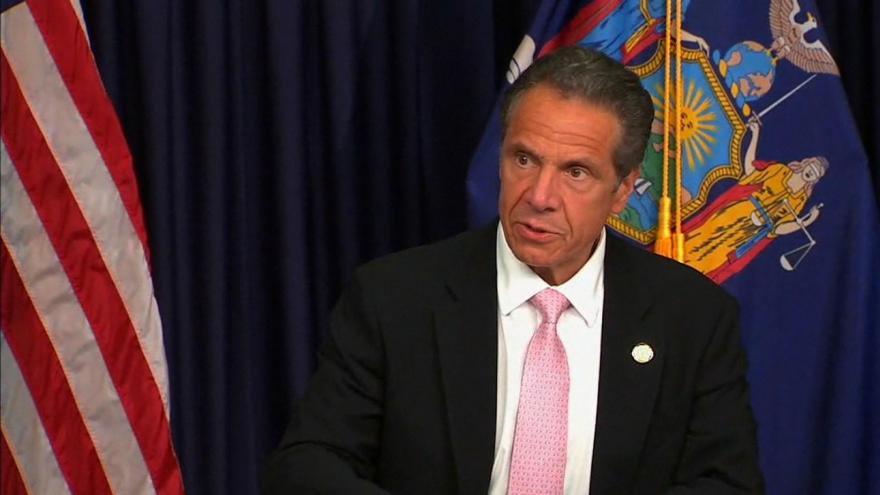 (CNN) -- New York Gov. Andrew Cuomo on Friday signed what he called the "most aggressive" police reform legislative package in the nation in a move that makes officers more accountable and criminalizes chokeholds and other controversial restraints.

The bills -- vehemently opposed by a coalition of law enforcement unions -- follow weeks of protests nationwide. Legislative efforts targeting police violence have taken hold nationally after the deaths of several African Americans at the hands of the police, including George Floyd, who died in Minneapolis last month after a white police officer knelt on his neck for more than eight minutes.

"The truth is this police reform is long overdue and Mr. Floyd's murder is just the most recent murder," Cuomo said Friday. "It's not just about Mr. Floyd's murder. It's about being here before, many, many times before."

Additionally, Cuomo signed an executive order making state funding to police contingent on New York agencies developing a plan by April 1 -- to be enacted into law after consultation with the community -- to "reinvent and modernize police strategies," including use of force guidelines.

"We're not going to fund police agencies in this state that do not look at what has been happening, come to terms with it, and reform themselves," he said.

A key measure signed on Friday involves shattering the veil of secrecy that a 1976 law provided police personnel and disciplinary records.

"Today is about enough is enough," he said.

The governor was joined by the mothers of two victims of police violence, activist the Rev. Al Sharpton and others at the bill signing in Manhattan.

Sharpton said Cuomo's executive action on police funding "raised the bar" and called on other states to follow suit.

Cuomo and state lawmakers agreed to advance a package of significant policing policy changes that had stalled for years because of opposition from law enforcement circles. The state Senate and Assembly by Wednesday passed 10 policing bills.

On Friday Cuomo signed four out of the 10 bills into law. The other six bills await his signature.

"We are at a moment of reckoning there's no question about it," Senate Majority Leader Andrea Stewart-Cousins said Friday. "We know this isn't a cure ... We know this is the beginning but it's a move to bring justice to a system that has long been unjust."

A coalition of law enforcement unions and associations consider the legislation "anti-police."

One measure outlaws the use of police chokeholds. It is named after Eric Garner, an African American man who died as a result of a police chokehold during a 2014 arrest.

Chokeholds were already prohibited by the NYPD at the time of Garner's death but the new law makes the use of "a chokehold or similar restraint" that causes injury or death a class C felony punishable by up to 15 years in prison.

The bill amending the controversial law preventing disciplinary records for police officers, firefighters or corrections officers to be released without their written consent dates to 1976. The statute is known as Section 50-a of the New York State Civil Rights Law, which was enacted to exempt police officers from being cross-examined during criminal prosecutions, according to the bill.

The coalition said in a statement that it worried all police complaints -- including those not fully investigated or substantiated -- will be released. It says a judge already has discretion on releasing such records and there are concerns officers would not have a chance to be heard.

Cuomo also signed a bill that designates the attorney general as an independent prosecutor for matters relating to the deaths of unarmed civilians caused by law enforcement. The measure is technically codifying an executive order Cuomo mandated in 2014 in the wake of Garner's death.

Democrats in Congress this week announced sweeping policing legislation, which faces resistance from Republicans, police unions and some local officials.