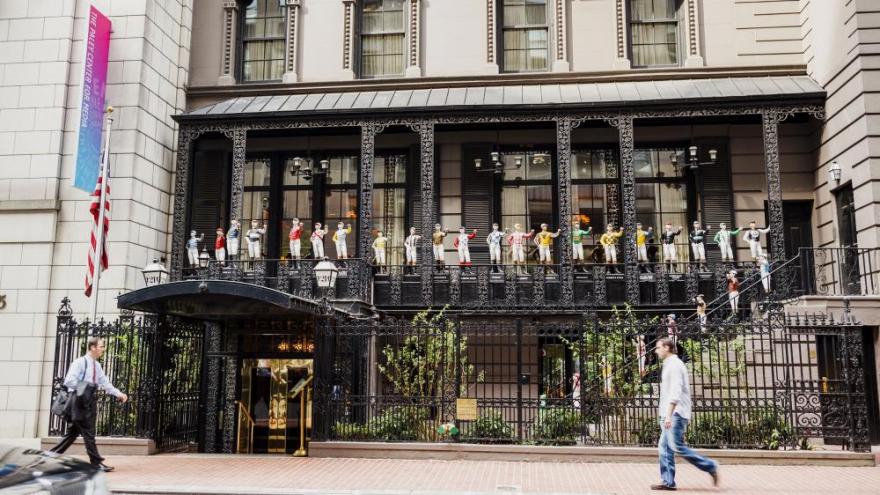 Pedestrians are seen walking by the famous 21 club on West 52nd street in New York City.

Bill Granfield, president of the Unite Here Local 100 labor union, says he received a letter on December 9 stating the restaurant is closing and all employees will be permanently terminated on March 9, 2021. The union represents 120 of the restaurant's approximately 140 workers, according to Granfield.

The 21 Club closed on March 16 due to the Covid-19 pandemic and has not reopened.

"In light of the ongoing global crisis and anticipated extended recovery period for the hospitality industry, it has become clear that it will not be feasible to reopen this business in its current form for the foreseeable future," Belmond, 21 Club's owners, said in a statement. "The company is committed to exploring potential alternative and transformative structural opportunities that will allow 21 Club to remain a viable operation in the long term, while retaining its distinctive character."

The restaurant first opened its doors on January 1, 1930 and became one of Manhattan's "most famous speakeasies of the Prohibition Era," according to its website.

From its perch on West 52nd street, 21 Club became a place to see and be seen for entertainers, business leaders and politicians.

The restaurant is easy to spot thanks to its collection of ornamental jockeys lining the balcony above its entrance. The first jockey was donated in the 1930s and more were added over the years thanks to donations from storied New York families like the Vanderbilts and Mellons, according to the 21 Club website.

The restaurant's bar room is also decked with memorabilia from patrons, including contributions from Presidents John F. Kennedy and Bill Clinton.

Granfield believes the closing won't be the final chapter for 21 Club. He believes it will reopen in some form once the coronavirus pandemic is under control. "There's a future with vaccines, and 21 Club is part of it," Granfield said.